There and Back Again

Yesterday I had to make a 200-mile round trip for a meeting that only lasted for a few minutes. It went well enough, but I wonder if, in the age of the internet, a couple of emails wouldn't have covered the following exchange:

Person: Is this the sort of thing you want?

Still, I suppose it is important to meet people face to face, shake hands and establish contact. I also quite like the opportunity to get out of the house and visit places I haven't been to, even if most of them seem to look exactly the same.

After planning my route, I realised that I'd be passing Aldbury - a village I'd wanted to visit ever since I watched this (try 1:16 to 3:20):

In this episode, Murdersville, Aldbury appears as 'Little Sworping In-the-Swuff' a wonderful name that is only slightly more absurd that those of many real villages I can think of. Was Aldbury as idyllic as it seemed and if it was, how much had it changed in the 45 years since that episode was filmed? Would I be like George Bowling in Coming Up For Air, searching for a land of lost content, only to find that it had been ruined beyond all recognition?

Fortunately, Aldbury seemed to be completely unaffected by the march of progress: 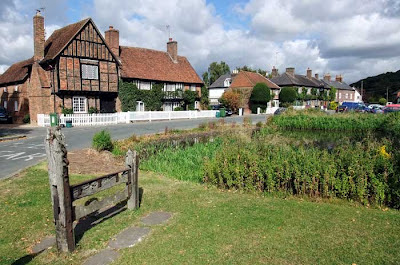 The centre of Aldbury is dominated by pre-19th century buildings, including several Tudor houses with thatched roofs. It's a picture postcard village, almost too perfect, as if it has been constructed for a film set. Unsurprisingly, Aldbury has appeared in 'Midsomer Murders'.

These stocks are next to the village pond, where Mrs Peel was subjected to waterboarding. Even today, it's quite a shocking scene and I pity her poor stunt double.

Up on the hill, there's a rather interesting looking building. I know that someone who grew up in Aldbury occasionally visits this blog, so I hope they might be able to shed some light on this mystery: 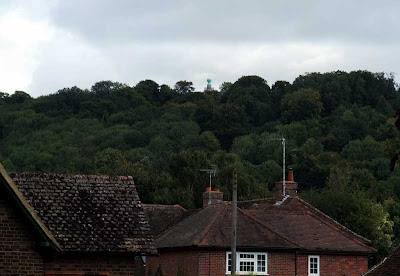 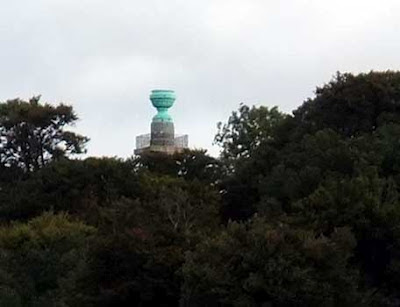 Almost every house I passed had something unique and eye-catching. I particularly liked this chimney, which seemed a little ostentatious for a small cottage: 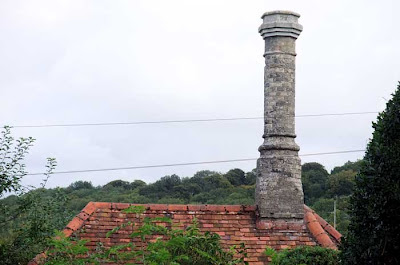 This building below is the local primary school. Again, it's an unusual, quirky building, full of character. 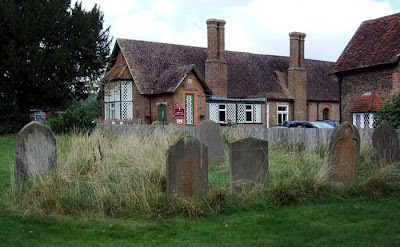 I'd spent the previous hour driving through bland estates of cheap, badly-designed modern housing, so it was a relief to visit somewhere that hadn't been ruined by commerce and short-sighted pragmatism. But as villages and towns like Aldbury and Lewes become increasingly desirable to those of us who aren't completely enamoured with the modern world, the disparity in house prices becomes increasingly polarised.

When I saw one man waxing one of three 1960s MGs in his drive, I wondered how many of Aldbury's current inhabitants were born there.

On the way home, I listened to a podcast of an interview with Salman Rushdie and was delighted to discover to during his time in advertising he was responsible for this:

Posted by Steerforth at 6:32 pm

My brother lived in Aldbury for many years and I remember walking across the fields to Tring station and happy times in the "Valiant Trooper". It was also featured in a programme caled "The Shillingborough Blowers" or some such.

The top of the Monument in your picture is the Bridgewater Monument on the top of Ashridge.

The interesting building is actually the Bridgewater memorial at Ashridge estate.

I found it by bringing up Aldbury in Google Maps and then selecting "Photos" of the area.

I remember that Avengers (from the recent repeat, not the original). Wonderful. (I was on the phone to my credit card company the other day and their "on hold" music was the Avengers theme tune - better than a tinny version of the Four seasons).

A couple of years ago I had to travel to Liverpool (from near Oxford) to deliver a presentation that lasted an hour. I like Liverpool, but it was a bitterly cold, windy day so I didn't really want to compensate by sightseeing as you could.

Thank you Rog and Luis. I also tried to track it down in Google Maps, but clearly need some tuition in this area.

Rog - That's a very serendipitous coincidence. I have a vague memory of the Shillingbury Blowers which featured Trevor Howard and the wonderful Robin Nedwell.

David - I only discovered the Avengers when it was repeated in the 1990s, on Channel Four. I was bowled over by its wit, style and inventiveness (not to mention the charms of Mrs Peel).

As far as sightseeing goes, I used to feel the same way, but I've been experiencing intimations of mortality recently, so I never squander an opportunity to visit a new place.

When are you swapping your car for a 4.5 L "Blower Bentley"?

I long for the day when I no longer have to drive a sensible family car *SIGH*.

What a great report. Love the area around the Ashbridge Estate. Such a lovely part of England. Thanks for sharing your trip.

Lovely to see Patrick MacNee and the impossibly slim and elegant Diana Rigg in the Avengers. And Aldbury looks enchanting in both guises, as movie set, and as actual village.

Thanks. I should have added that I had a drink in the same spot where the two 'yokels' were sitting.