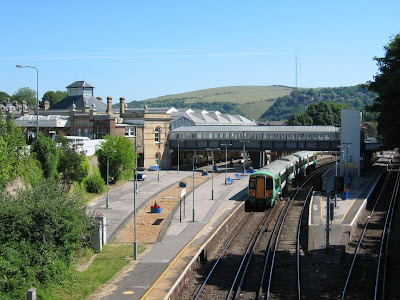 Whenever I go to zoos, I always see at least one young couple carrying a bemused-looking two-month-old baby. "Look at the elephant Poppy!" the father exclaims in the high-pitched voice of a children's television presenter. Poppy looks on impassively. For her, the large grey thing that she will later discover is an elephant is no more notable than the large brown thing that is a gift shop.

I did exactly the same thing with my first child. It was ridiculous, but I was so excited at the prospect of being able to take him on days out I couldn't wait. I probably wasted a lot of money on trips that my son has no memory of. With my second son, I have had the good sense to ration museum excursions and lower my expectations of the visit.

Yesterday I took my younger son to the Imperial War Museum. Normally, the word museum doesn't provoke a terribly positive reaction in my children, so I carefully said that we were going to the *mumble* Imperial *speak up* WAR *mumble again* Museum. My son look thoughtfully and replied "Cool".

I wish he wouldn't say that.

I like travelling to London on a Saturday. During the weekdays the trains are packed full of weary-looking people that hate their jobs, self-important businessmen who think the carriage is an extension of their office and lumbering NVQ students on their way to Crawley, with headphones pumping out cicada-like rhythms. On Saturday everyone's in a good mood.

The train arrives on time and to my relief, it is 12 carriages long. Occasionally, for reasons unknown, the train only has four carriages and an unseemly scramble ensues. It's quite amusing watching well-to-do people desperately running down a platform, trying to maintain their dignity.

I wonder how we will pass the one-hour journey. Sometimes my son is extremely garrulous, bombarding me with questions like "Dad, how many bullets would it take to kill a stegosaurus?" Today he is silent, possibly overawed by the experience of being on a train, so I'm able to eavesdrop on other people's conversations:

"I say she should be able to do whatever she likes, but she can't go around wearin' a bodice all day. I mean, it's not the Victorian age."

I look behind me and see two men in their late 20s. I was hoping to hear more, but they are drowned out by a recorded annoucement.

To my left, a man in his 60s is holding court to some people who don't seem to know him very well:

"Well I love looking at the boats in the harbour and seeing what the people are doing and if that makes me a peeping tom, then yes, I suppose I am. But they don't kow anyone's looking at them so there's no harm in it. I think people are fascinating. As you get older, you can get a bit cut-off being in the country. I'd quite happily live in the centre of Lewes, right on the High Street where I could watch everything going on, but Sheila says she'd miss having a front garden."

I am distracted by the trolley service. I don't know why, but having a tea or coffee on a train always feels like such a treat, I'll even buy one when I don't really want a drink. Like every other trolley attendant on this line, the young man who serves me is Eastern European. A few years ago, there used to be a man in his 70s who must have been one of the last people to have a real Sussex accent: "Tay, cahfee, beerrr..."

The man on my left is still talking:

It's an investment. They won't build any more like that. Last Sunday I was sitting in the conservatory, watching the thunder storm. It was the most spectacular storm I've ever seen. I saw three forks of lightning dancing along the top of the Downs..."

We arrive at Wivelsfield. The name always makes think of an obsequious, Uriah Heep-style character in a Dickens novel. No-one ever gets off at Wivelsfield.

The rest of the journey is uneventful so I read the Guardian magazine, which has an interesting interview with JK Rowling about her new novel for adults. I was one of the early supporters of Harry Potter, but grew disillutioned when it became a franchise. By the time of the fifth book, I was so sickened by the hype and the obligation to dress up as a wizard at midnight, I decided to liven things up with some real snakes and venomous spiders. That was a memorable book launch.

We stop at Gatwick,  where two men with beards, backpacks and flip flops board the train. One of them sits next to me and leans right into my body space. I glare and he shuffles away. Welcome to Britain.

At Clapham Junction we change trains. I tell my son to look out for Big Ben, but the skyline has changed and we can't see a thing. 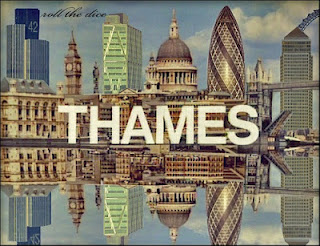 Waterloo is packed and I compare the station with a 1979 photo I posted recently, which shows a greyer, grimmer, half-empty concourse. We take an escalator to the Bakerloo line, where the tunnels are reassuringly shabby, and travel one stop to Lambeth.

The walk from Lambeth North to the Imperial War Museum is unremarkable, but I have a pleasant surprise: 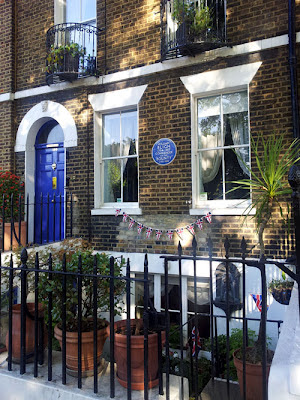 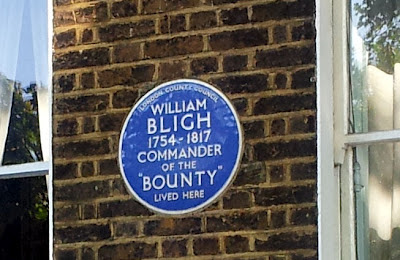 I'm particularly pleased to stumble upon this house, as my sole contribution to my older son's home education at the moment is to study the mutiny on the HMS Bounty. We've already watched the 1935 Hollywood film with Charles Lawton. Next, we'll tackle the 1984 version with Anthony Hopkins and Mel Gibson.

Apart from teaching my son a little history and geography, I hope that it will get him thinking critically about the reliability of the narrative in historical films. Was Captain Bligh the sadistic brute of popular myth? With a screenplay by Rober Bolt, the 1984 film should be more balanced. If only they hadn't asked Vangelis to write the music.

The Imperial War Museum is a big hit, but my attempts to emphasise the pity of war fall on deaf ears: "Those guns are big! Could they destroy a whole house? Cool!"

On the way back to the tube station, I am subjected a stream of questions: "Who was on our side? France? But I thought they were our enemy. Why did they lose to the Germans? Was Spain on our side? Why not? Was Africa on our side? What weapons did they have?"

We finish the day at the London Eye, where there are the usual people pretending to be statues of Michael Jackson. "Who's that?" my son I asks. I explain that it's a real person standing very still, dressed as Michael Jackson.

What a difference three years makes.
Posted by Steerforth at 10:13 pm

If you want the IWM experience dialled up to 11, you could try the Tank Museum sometime. Great fun.

Glad you had a good day out - and congratulations on getting it in before the rain started.

Yes I must try that - it's near Monkey World isn't it?

Yes, at Bovington in Dorset.

An entertaining piece, as ever, Steerforth. You may be morphing into the Alan Bennett of Sussex.

Martin - Thank you. If only that was true. Sadly, I know my real place in the pecking order.

My boys love war museums. We got round a lot this summer as Essex is full of them - Tilbury Fort, the Combined Military Services Museum, the Secret Nuclear Bunker, and the Historic Dockyards on the other side of the river...

The IWM is great, my two loved the Clink museum too. They particularly enjoyed trying to chop each other's heads off on the block.

My great great aunt used to live in a care home in Swansea right on a main road and opposite what she was convinced was a brothel. She spent many a happy hour watching the world go by. Not everyone wants to live in the middle of nowhere even if it's pretty. It gets very boring staring out at the trees.

I love the nuclear bunker too. I'll definitely try Chatham and the Clink museums.

I know some people might disapprove of encouraging an interest in warfare, but at least it's giving the boys a positive experience of museums and providing a historical framework that will later become more rounded.

I've tried the Tate Modern, thinking that the art there would be quite 'fun' and it was a disaster, so guns it is.

Last week I helped on a school trip to the Pitt Rivers museum in Oxford. It is a collection of stuff - everyday things from around the world. It's wonderful - I love going there.

The boys were there to draw masks and shields, but were much more interested in the weaponry - VG gun and sword collections, and the voodoo shrunken heads!

My eldest has been exploring everything to do with WWII for about nine months. We have visited the IWM North, Eden Camp, a U Boat and Western Approaches. We are heading south next week to visit the Fleet Air Arm Musuem and the Tank Musuem. He knows all about how the war developed across Europe and the rest of the world and who was fighting whom, I have leant loads from him! He has now realised, for himself, that war is a horrible thing. I would support his interests, it is part of the history of this country.

Annabel - I'd love to see some shrunken heads. They used to have them on the top floor of the Science Museum, but some spoilsport had them removed when the history of medicine dispaly was revamped.

Sustainablemum - I'm very lucky, as my mother lived in London during the Blitz and has a very good memory of it, so for my sons it's a living history.

Strangely enough, we are planning to go to that very museum ourselves shortly! (aka Bedlam!)

Sounds like you found the train journey infinitely more fascinating though.

Perhaps you should rent your sons box set of 'The World At War' I was about seven or eight when I first watched it and took war deadly seriously ever after. It made an incredible impact on my young mind and was definitely worth a nightmare or two to understand this part of history and what it was like for those who experienced it.

Nudie bits in the remake of MotB, if I recall correctly. Parental guidance is suggested...

What a great bit of writing! sitting here reading at 5:30 am with 5month old twin sons who have just gone too sleep.Cant wait to be able to take them to muesums.

Anonymous - The days out will be a well-deserved reward for all the sleepless nights that you're experiencing now.

By the way, I am going to be blogger in residence at this year's Aldeburgh poetry festival in November, and for their free 'Poetry Paper' (which gets read and handed out all over the place for months after) they asked me a few questions. One was what other blogs I would recommend. Yours was number 1. Not poetry, technically, but I don't think that matters.

Well, to say I'm flattered would be an understatement. Thank you.

I'd better try and write some decent blog posts before the festival begins.

Don't be silly. They're all good.

Ps. Capt. Blythe is buried in the garden of the Garden Museum at Lambeth in what used to be churchyard there. I stumbled upon it when touring the museum as a visitor from Canada a few years ago. A very sweet institution by the way. Cheers.