A Very Tight Corner with a Lynx-Eyed Man 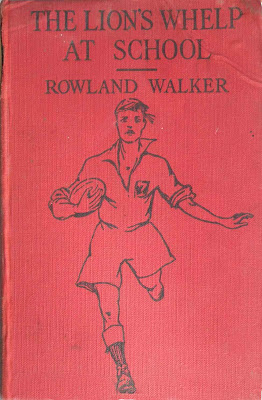 It's pure "Boy's Own": lots of "I say chaps! This is jolly unfair. I vote we give the rotter a taste of his own medicine."

Best of all are the chapter headings:

I'd love to visit the "Super-Tuck" shop and as for stern chases, I know all about those from Sheerness.

What struck me about the chapter headings was that although the book is probably complete rubbish, it has a pace and melodrama that many of the worthier children's novels of the post-war era lack. I've no doubt that the success of the Harry Potter books is partly down to the fact that they are old-fashioned, plot-driven novels.

Last year I read the complete Five Find-Outers series to my oldest son and even though I knew that Enid Blyton was no Michael Morpurgo, I had forgotten just how badly written her books were. However, in spite of myself, I had to find out who the shadowy figure in the window of the deserted cottage was.

Why one two-dimensional, cliche-ridden children's novel should be out of print while another is a classic, is a mystery. Many of the books I deal with by forgotten novelists went through several reprints in their own time. I'm sure that if some of them were reissueed today, they would find a new audience.

However, in spite of its racy chapter headings, I don't think we'll be seeing a new Puffin edition of "The Lion's Whelp at School".
Posted by Steerforth at 7:38 am

i think it sounds ripping. I'm absolutely mad about a series of books about a boy called Bunkle: I inherited them from my father and am saving them for Trefusis Minor. Fidra books have been reprinting them, thankfully - the originals are quite hard to get hold of.
I had to read The Magic Faraway Tree to TM the other week and it nearly killed me: I remember enjoying Enid Blyton as a child but really, I can't bear to read it aloud. [shudder]. We seem to be going through the collected works of Roald Dahl at the moment - Trefusis Minor looked at me last night after another chapter of Charlie and the Chocolate Factory and said, gravely, 'I think Roald Dahl is an excellent writer.'

The Magic Faraway Tree is a huge disappointment when you revisit it, although I still have a soft spot for the Book of Brownies.

I sell the occasional Bunkle book and they fetch ridiculous prices - I'll have to try them on my progenies.

Mmmm, talking of Enid Blyton's books having been badly written, well that depends on one's opinion. For us that grew up learning English as a second language, Enid Blyton's simplicity in language and prose was bliss. Thus, this explains why I later decided to write and publish a book on her, titled, The Famous Five: A Personal Anecdotage (www.bbotw.com).
Stephen Isabirye

I loved The Faraway Tree as a boy - not because of the book itself - I was more interested in writing my own chapters in my head, I think that was the appeal.

Does the boy on the cover have a stump?