I never cease to be amazed by how quickly bestselling authors can plummet to obsurity within a decade. Every day I see the same names: Dornford Yates, Howard Spring, Frances Parkinson Keyes, Mazo de la Roche and Warwick Deeping. In their time, they were incredibly successful, but by the mid-1960s they had disappeared from view.

At a glance, it looks as if some sort of literary Stalinist purge has taken place, but the reality is a combination of changing fashions and writers dying of old age. Nevertheless, there seem to be distinct geological periods in literature that are defined more by the forgotten authors than the ones we remember. Howard Spring and Warwick Deeping belong to the interwar years, whilst Silas Hocking and Mrs Henry Wood are indelibly linked to the late Victorian period.

I almost sound as if I know what I'm talking about. It is amazing how quickly I have gone from being a complete charlatan to someone who can convey an air of authority when talking about rare and antiquarian books.

Only last week, I received a phone call from a man whose grandparents had just died. He wanted me to value their books and, flattered by the prospect of behaving like an Antiques Roadshow expert, I agreed to pay him a visit later that day (perhaps I should have enquired how his grandparents came to die at the same time, but I did at least leave his address with my colleagues in case I never returned).

Today I discovered a new author: Harry Stephen Keeler, described by Wikipedia as a "prolific but little-known American author." 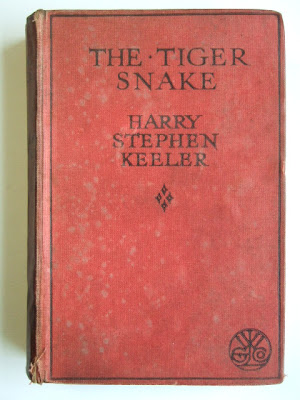 I don't think I'll ever read "The Tiger Snake", but it has some cracking chapter headings that read like the plot of a Gay Men's Press novel:
As for Mr Keeler, he seems to have hit on a novel solution (no pun intended) to the problem of a receeding hairline: 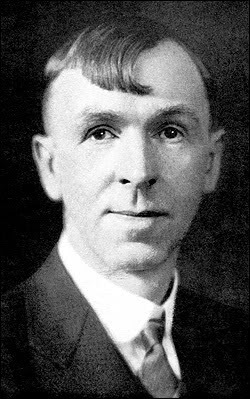 Posted by Steerforth at 3:51 pm

Ah, the warped magic of Keeler: http://home.williampoundstone.net/Keeler/Home.html and http://site.xavier.edu/polt/keeler/index.html are good starting points for people intrigued by this uniquely demented author. I've read some of his work as e-texts from the latter site. Nothing else quite like it.

Interesting to note that these writers have no safe harbour. In Canadian church bazaars, we wade through Mazo de la Roche in search an interesting read. Indeed, Miss de la Roche is remembered here for being a forgotten author... we wonder that she was once so popular. This is, I suppose, a better fate than her countryman Thomas B. Costain, whom it seems we don't remember at all.

My thanks for the introduction to Keeler, who is already becoming something of an obsession.

Keyes, de la Roche, Costain, to the extent that our copies have survived the ravages of time, endure here in the American South on our library shelves, where they continue to survive our annual weeding. Someone is reading them.

Taylor Caldwell, Frank Slaughter, Harnett Kane, Edna Ferber. Deeping I'd never heard of until someone donated "Corn in Egypt", which I read. The there is the other Winston Churchill.

This is exactly the sort of book which sold when we put it in the window of Oxfam Bookshop when I was a volunteer.

But hey, what about staging an event when you have amassed enough of these curios, giving a little blog-based discourse on each one with an auction afterwards? You might find that all these obscure authors are suddenly highly sought after by those who enjoy the curious.

Thanks for the links James - warped magic is exactly what it is!

Brian, I come across quite a few Thomas B. Costain books here. Sadly, they generally end up in the skip.

Brett - Is Florida a retirement home for old novels as well as people? ;)

Laura - that's a brilliant idea. I'm working on website for my project and that would be a really good feature.

Fascinating post - thank you very much indeed. In recent years I think there has been a growing awareness that many excellent authors simply slip out of the cannon of celebrated literature - this can happen quickly and unfairly - so publishers like Persephone and Capuchin and to an extent Virago try to keep forgotten classics alive. thanks indeed for sharing this post

I'd quarrel slightly with Dornford Yates being on the list, I have read some of his.

As for the rest, well... I suppose old authors have to be cleared out or we'd never have time for any new ones. But I wonder if you are likely to ever come across anything that is forgotten but worth reviving (ie not just a collectible item but capable of being republished)?

You have an absolute gift for bringing the obscure, the little-known and the long-dead alive again if your blog is anything to go by Steerforth. I'll bet you're an excellent speaker too, full of natural enthusiasm.

A room, a laptop and a projector (+ merchandise) and hey presto! Ok and perhaps a gavel as well...

Fabulous stuff on Keeler. How about this as a plot outline:

"A man is found strangled to death in the middle of a lawn, yet there are no footprints other than his own. Police suspect the "Flying Strangler-Baby," a killer midget who disguises himself as a baby and stalks victims by helicopter. (X. Jones of Scotland Yard, 1936)"

and I might remember this dedication the next time I get something published:

"Some of Keeler's books were dedicated to pet cats. One is dedicated to one of his own fictional characters."

I remember loads of Mazo de la Roche books - all with distinctive pink covers when I did my Saturday job at the library in the mid 1970s, but people were borrowing them. Don't ask me what she wrote about though!

I sometimes wonder if The Girl with the Dragon Tattoo and the rest will end up giving off the same emanation as Who Hid the Key? by Clinton W. Locke when you find it in an Oxfam shop.

It's quite possible. I can think of many novels that were both critically acclaimed and commercially successful, but are now largely unread, e.g. anything by C.P.Snow etc