Twelve years ago I had an incredibly vivid dream about being in Chile. It was sunset. The sky was a deep orange and I was walking along a quiet road that was littered with purple blossom. Unlike most dreams, which are usually a montage of random nonsense, this one was quite explicit: go to Chile.

As a hardcore rationalist, I dismissed the dream's message. I had no connection with Chile and had never visited South America, so why was this dream so compelling? Was it anything to do with the fact that it was February and I was working in Slough? More than likely.

Three days later, in a moment of madness, I picked up my credit card and booked a flight to Santiago.

Three weeks later - exactly twelve years ago - I was in Puerto Montt in the south of Chile, wondering what I was doing there. I had travelled to Chile in search of warmth and sunshine, but had travelled so far south that the climate was beginning to feel very British.

Even the landscape looked familiar. Frisian cows grazed in lush green fields bordered by blackberry bushes. Blue skies were dotted with white, puffy cumulonimbus clouds. It could almost have been Devon, apart from the snow-capped, smoking volcano in the distance.

When I arrived at Puerto Montt, the sky was grey and the sea a familiar dull turquoise. It was like Bognor Regis.

I found a cheap room, with a window that turned out to be directly above the outflow vent of a restaurant kitchen. Soon, everything I wore stank of cooking oil, but that was the least of my worries. Earlier that day I had decided to visit the loo on my coach and as I shut the door behind me, the wheels went over a cattle grid and the urine of several dozen passengers splashed up onto my jacket.

I decided that my sartorial demise ruled out restaurants, so I decided to wander around the town in search of a decent cafe.

Puerto Montt was an intriguing mixture of slightly rundown buildings with corrugated tin roofs and a modern shopping mall that looked as if it has been stolen from Fresno. Outside the smart chain stores, hawkers lined the streets selling socks, felt tip pens and used plastic bags. Most of the people were either Indian or mixed race, but all of the adverts featured European faces.

As I walked towards the seafront, I saw a circus:

It was a sorry sight. There were no acrobats or clowns around, but several ill-fed, badly-treated animals. In the picture below, a group of people were deriving great pleasure from watching a monkey that was tethered to a chain, trying to free itself. As you can see, it was too much excitement for the man lying on the ground: 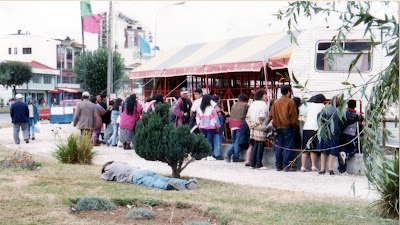 But the saddest sight of all was this: 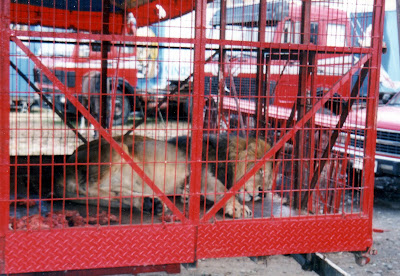 My camera, which was one of my most ill-advised purchases (remember the so-called Advanced Photographic System?), fails to capture the dull, mangy coat of the lion. The cage was so small that the lion was barely able to turn.

I was glad that I was staying in Puerto Montt for just the one night. Even so, it still beat Slough. The next day, I boarded a ferry and travelled to the island of Chiloe.

Chiloe was one of the wettest places I've ever visited. Luckily the oil from the kitchen vent had waterproofed my clothes. I smelt awful, but at least I was dry.

When the sun came out, Chiloe was stunning. The palafitos in Castro, the island's capital, are now a UN World Heritage site (I think, or I could be making that up).

I had planned to arrive in Castro on 3rd March - my birthday - and spend the evening celebrating in the best restaurant I could find. Sadly, five minutes after leaving the hotel I was caught in a downpour and, rather than let my desert boots get completely soaked, dashed into a nearby restaurant.

The moment I entered I knew I had made a mistake. It wasn't just the smell of rot and vomit, but also the lack of customers that was offputting. I decided to try and keep an open mind, but the food was gaggingly, gut-wrenchingly awful. As for the wine, I can only assume that there was a bet on in the kitchen to see whether the Englishman in the corner would drink a glass of genuine piss.

It was a very weird birthday, but memorable.

The next day the rain was so bad that I couldn't go out. I turned on the only English television channel to find Kevin Costner's Waterworld. Those are the darker moments of travel: rain, bad food and a Kevin Costner movie. Luckily I had a copy of Bleak House with me.

Obviously this post has been inspired by the news coverage of Saturday's earthquake. In spite of some rather odd experiences, I quickly fell in love with Chile. It is a magical place. I no longer dream about Chile in my sleep, but when it is February and the sky is permanently grey and the air is cold and damp, I know that there is somewhere in the world where I can feel the sun on my skin and pick blackberries.
Posted by Steerforth at 9:25 pm

Email ThisBlogThis!Share to TwitterShare to FacebookShare to Pinterest
Labels: chile

Chile is on our "to-do" list, and has been moving up that list to the extent of buying maps and guides, and working out where we would stay, etc. Sadly, not now, and not for some years, I imagine. Was your urine-and-vomit flavoured experience under Pinochet?

No of course not under Pinochet, who had probably just stepped down as commander in chief when you were there. Sorry!

Unfortunately I just missed Pinochet, although I did attend a scary army parade (I think he was still the head of the military then) with lots of soldiers smartly dressed in Gestapo grey.

hey!! so i was looking thorugh your archives and i noticeed your post from september about that book on the french riviera.... i'm a fashion student at saint martins and am currently doing a project on that time and place so wondered if you had anyother pictures from the book that you could email me? I can give you my email address if you like, but , i would really appreciate any help or even if you could recommend where i might find more books i would be over the moon!! thanks!! :)

Hi Fiona, I'll gladly email some images - they're not from a book, they're from someone's photo album, so they're unique!

Did you just want ones with people in?

If you send your email address to steerforth@live.co.uk, I'll forward my scans within the next couple of days.

Happy Birthday! (from one Piscean to another).
I'm sorry I haven't commented on previous posts for a while - I've wanted to, and enjoyed them enormously, it's just that I'm mostly reading you on iPhone or Blackberry and it's a really wearing process trying to post a comment on mobile. Apologies.
And this, of course, is yet another terrific post - thank you.

I'm so delighted to have discovered your blog: I always feel decidedly perkier when I see something new from you on my blogroll.

Hope you get a better birthday dinner this evening, and a decent glass of wine or too.
x

Many thanks Madame Trefusis. Sadly there'll be no wine tonight, as I'm halfway through a ridiculously strict health regime, but the light at the end of the tunnel is a bottle of chilled Pouilly-Fumé.

Thanks for your kind words about the blog. I'm not surprised you don't leave comments if you're using Blackberrys and iPhones - I can't even send text messages without feeling a quiet rage.
These gadgets are designed for the fingers of very small children.

Happy Birthday for yesterday, which seemed to me to be the first day of the year when I had exactly 12 hours of daylight and dark - which must be a very good omen. Steerforth ushers in the Spring.

I so enjoy reading your posts, I couldn't not include you in a selection for a blog award. I'm sure you don't bother with them, but one of the rules is to let the awarded know about it!
Hope you find the time to do it.

Thank you Richard - that appeals to my inate pantheism. Spring is my favourite time of year.

Lewis - I'm very flattered to have have been mentioned, particularly by someone who (judging by your blog) is extremely discerning.