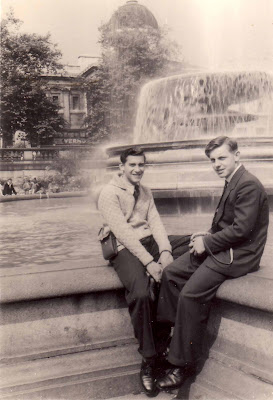 As regular readers of this blog may know, last month I came across a large box of personal journals, written by a former local government officer called Derek (left). If I hadn't been passing through the warehouse just after Derek's diaries arrived, I've no doubt that they would have been promptly binned. They are of no value.

I couldn't bring myself to throw four decades of a person's life into a bin and I am now stuck with the box, making excuses every time someone asks me what I'm going to do with it. I honestly have no idea.

I've now read several of Derek's diaries and although it feels rather voyeuristic, I hope I am that sympthetic, unknown reader that most of us hope for when we write.

It is hard not feel sympathy for Derek. He emerges from his writing as a compassionate, thoughtful person, with an unswerving loyalty to his faith, family and friends. But what makes Derek's journals so compelling is that he is a man plagued by passions and dark thoughts ("I am a laughing man with tears behind the smile.")

Derek dreams of behaving in an "improper" manner towards his female colleagues. He is also an incurable hypochondriac, plagued by an endless succession of minor complaints:

"I have a headache and I am tired. And flies, black flies, are killing my gladioli. They are laying their eggs inside the flowers as the devil lays temptation in a man's mind: both are destructive."

"Brenda came to me. For a while we lay upon the lawn, but decided to evacuate when a caterpilla crawled onto my hand. Brenda hates insects. So do I."

I also enjoy passages like these, which seem to appear at random:

"Satan came to me last night in the form of Edward Chave. When I brought up the question of him boring his children...he rose to his feet, put on his hat and stormed out of the house."

"Once the coach party was over, I asked Vic Lipppett to accompany me to the station as I was carrying about £200 worth of equipment and didn't fancy being mugged in the underground passage. As we were walking across, he opened his coat and showed how well-prepared he was; he had a revolver tucked into his trousers. Whether he had a licence for it I do not know."

"I looked at frilly nightdresses and underclothes today in a shop window. I had a strong urge to buy them all for Brenda."

In a telling entry, Derek writes that his journals "make me squirm when I read them. They are full of self-pity, mawkish sentiment, selfish opinions and abysmal writing. Were it not that I truly believe that the child is the father of the man, I would confine those journals to the fire."

In another passage, Derek talks about posterity. I'm glad he never knew what posterity had in store for his writing.

Outwardly, Derek led a fairly unremarkable life, but his diaries bear witness to the quiet heroism that pervades the lives of many ordinary people. I don't think I'll ever be able to throw them away.

N.B - I have tried to donate Derek's diaries to an archive, but so far haven't had any success.

Posted by Steerforth at 9:43 pm

It makes me think about our blogs which, though they are written with the public eye in mind, are like diaries or daybooks.

If I were hit by a bus tomorrow, I suppose my blog would be a ghost-blog, lingering in cyberspace until Blogger cleaned house or ceased to exist.

Do you archive your blog in some fashion?

No, I don't. I've always viewed it as ephemeral, but you're right, it will probably continue to exist in th ether of cyberspace.

I don't like the idea that someone could pull the plug on it without my consent, so perhaps I will archive the blog.

You know, I've wondered the same thing about online content... a friend of mine passed away and sometimes Facebook still brings him up in that sidebar telling me I should 'reconnect' with him. His profile is still up and I bet there are other tidbits lingering in a sort of virtual legacy.

Would highly recommend backing up your blog. It's pretty easy to do... there's something like bloggerbacker (think is the name) that will save it for you on your hard drive every time you tell it to.

I could WEEP for Derek. I really could. And in extension for myself (oops, there is that mawkish self pity - do you think it could be contagious, like the hypochondria that my doctor, alarmingly, says I suffer from so frequently?)

What a shame he never lived to blog.

Although it's almost more impressive that he kept up four decades' worth of diaries not knowing what would become of them or if anyone would ever read them.

I like his authenticity though and how he leads such a normal life, yet conversely you couldn't make it up!

Funny how he seemed to have it all in his life and yet was actually quite tormented.

Perhaps Brenda was a little inhibited, despite her evident love for him. Or perhaps they both laboured under the narrow religious belief that marital love was for the begetting of children only. How sad he he was too inhibited to even buy her a frilly nightie. I'm sure she would have been delighted and looked no saucier in it than Hattie Jacques.

Thanks for the tip Jessica, I'll try that.

Yes, if only Derek had blogged. If my typing speed was 80wpm and I had lots of time on my hands, I'd consider setting up a Derek blog.

Yes - magically and unwittingly parachuted into the future blogosphere. What an extraordinary reincarnation that would be for Derek. How astonished he would be - but perhaps also mortified? Did anyone read the 1st world war letters of Harry Lamin - now a blog? http://wwar1.blogspot.com/

Minnie said...
This comment has been removed by the author.
12:20 pm

Minnie said...
This comment has been removed by the author.
12:27 pm

Perhaps this could be the making of a book!?