The Perils of Novel Reading 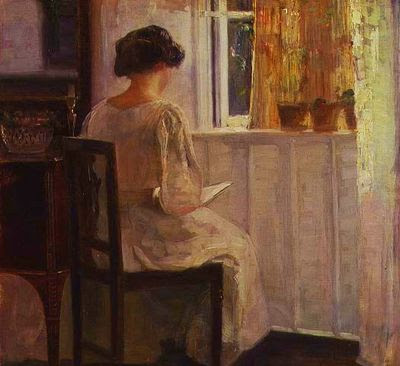 Yesterday I found a wonderful Victorian self-help guide called "The Young Woman's Book". Compiled and edited by Mrs Valentine, a well-known children's author in her day, the book contains advice and instruction on an astonishing variety of subjects, from employing domestic servants to choosing a pet bird.

Books of this kind are always amusing, but The Young Woman's Book puts its rivals into the shade, expressing opinions that make the Taliban look like a bunch of hippies. I'll be posting several extracts during the following week and will begin with one of the more moderate chapters:

"To sit over a foolish or even a wise novel when the daily duties of life demand our attention is absolutely wicked. We have seen, in our own life, the mother of a family devote herself to novel reading.

The father was at sea in the merchant service. A boy, a girl, and the house demanded the wife's attention. The children were neglected, dirty, ragged, untaught, running about the roads; the house was dirty beyound description, for there was but one servant, who naturally, followed her mistress's example.

The wife could not make her income suffice her, because no one watched against waste or dishonesty in the kitchen, and her husband, when he came home from sea, was arrested for her debts.

The son, utterly ruined, ran away from school, and finally disappeared in Australia. The daughter, trained only in the unreal folly of novels, married secretly a man much below her father's station - he was also an hereditary madman!

When the mother of the boy and girl married, she had been a lovely, clever girl. But novel reading, like intoxication, bought misery on her and on two following generations."

Wise words. I hope that you will heed the advice of Mrs Valentine, throw away your novels and attend to domestic duties, before it is too late.
Posted by Steerforth at 10:24 am

Oh, this explains SO much about many of my friends (not me, of course....)

What wise advice. I can't begin to tell you the trouble that novels have got me into.

Brian Busby said...
This comment has been removed by the author.
3:12 pm

It all sounds like the plot to a wonderfully foolish novel. I read it of and over again, then showed it to my housemaid. She so admires my taste.

at least the son was saved by going to Australia! And, this on the eve of Australia Day....a message.

I fancy a trip to Australia. I'm off to steal a loaf of bread...

Brian - you shouldn't be so familiar with the servants.

haha! I love this. It reminds me a little of Madame Bovary - a lot of her problems are down to her habit of lying about a reading romance novels, aren't they?

My house is a disgusting mess too, and my child is near-feral. At least now I know why.

I admire anyone that can read a novel while young children are running around.

I can barely read a short newspaper article without being distracted by either the noise or, even worse, the silence of a child that is up to no good.