When I woke up on Wednesday morning, something felt wrong. I made the usual perfunctory checks to confirm that I hadn't been kidnapped or had any organs removed under sedation, then listened carefully for any signs of life. Nothing. It was like 28 Days Later meets The Day of the Triffids.

After making the long, painful journey between thinking about getting up and actually doing it, I discovered that the world outside was covered in thick snow. There were no tyre tracks and when I looked at my car, half-buried at the bottom of a hill, it was clear that I wouldn't be going to work.

I was snowbound for five days. This could have been a good thing, but unfortunately my sons' school was cancelled and I ended up with an extended "Director's cut" version of the Christmas holidays, with extra scenes of temper tantrums and complaints of being bored. Also, the heating packed up. 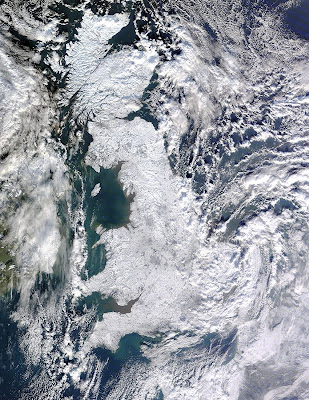 It's serious stuff - the worst winter for nearly 50 years, apparently. In spite of this, when I returned to work today, I found this email - from someone in England - about a book that was ordered on the 30th December:

"This book has not yet arrived, and I'm a bit concerned that it may have been lost in the post. Could you please let me know if you're aware of any delay?"

I enjoyed writing the reply.


After spending most of my working life in bookshops, it's a huge bonus not to have to deal directly with my customers. Working with the public is like Russian Roulette - 95% of the people may be fine, but you never know when the bullet's coming. Internet bookselling is a welcome change from bricks and mortar.

The one downside of internet retail is that some people feel free to send pompous, belligerent and occasionally downright rude emails, knowing it's unlikely that I'll ever have the opportunity to give them the punch in the face that they so clearly deserve. A simple typo prompted someone to send an email beginning "You idiots..." (I replied in a "forthright" manner and received a rather shamefaced response from someone who claimed that his email account had been "hacked into").

A few days later, a duplicate order problem prompted someone in New Zealand to send a long, bitter diatribe complaining that booksellers in Britain probably couldn't be bothered to post orders to the other side of the world. A chippy, pathetic and unwarranted whinge.

What a contrast to blogging where, so far, I have seen the best of humanity. My ambition for this year is to meet at least one person from the blogosphere. Ideally, I'd like to organise some sort of viral, flashmob-style meeting, but that probably contravenes the First Law of Blogging.

Posted by Steerforth at 8:39 pm

I was a little peeved not to be much troubled by the snow here in London, but reading your story reminded me that after 24 hours it's nothing but a horrible inconvenience. God knows it was hard enough entertaining the infants when it was too cold to go to the park. I don't think I'll ever get the cake mix off the terracotta tiling nor the glue off the table.
I've had very good experience of Internet book sellers & dealers via Abe Books. And once went to great lengths to collect more of my favourite books (Bunkle) by bidding on eBay. Again, rather better than a lot of the experience I've had of things in proper bookshops (don't start me on Hatchards.)
I met a number of bloggers this year: mothership (motherhood the final frontier) who commented recently on one of your posts, was one. There was a large and rumbuctuous Twitter party (also for bloggers) in south west London where I met some more: all the meetings were a great success. People tend to be very like they are on screen. I don't know why I think that might not necessarily be the case.

Mrs Trefusis is quite right, we are all far too accustomed to the instantness of 21st century life.

And if you meet any blogger, make it Mrs T, she is even lovelier and more charming than the screen would have you believe.

Yes, I have also noticed that blogs, apart from politically partisan ones, seem only to attract comments from people who find affinities with them. Different from e-mail, and even more from forums.

We had sleet last Friday, here in North Florida, which is unusual. My bird bath was frozen solid. We must let our exposed, uninsulated pipes drip, or they burst, at great expense.

I saw an article about tourists from the UK and Ireland who booked vacations in Central and South
Florida, only to land in the freezing temps they thought they were escaping from. It was 36° in Miami yesterday! Agricultural losses, citrus and vegetables, are staggering.

I made my first trip into Hastings yesterday, town was unusually busy - people had obviously been trapped indoors for 5 days and were so desperate to get out that they risked life and broken limb on the ice - most were parents with small children - they all looked tired and brimming with internalised rage, the children all seemed to have red glowing eyes.

As for blogging meet ups, I'll have a word with the warden - but I'm not due any day release this month.

Mrs T - Hatchards is, of course, owned by the Great Satan of bookselling, trading on a reputation it stopped deserving years ago, so I'm not surprised.

It's comforting to know that meetings like this have taken place successfully - I know that some parts of the internet attract people with "issues", but blogging seems to be an excellent filter.

Brett - I shouldn't laugh, but the image of UK tourists arriving in a frosty Florida is an amusing one. I didn't know Florida had weather like this!

Richard - Yes, it was hell. I have stood in freezing cold playgrounds with sleet accumulating on my head, just to avoid the terror of remaining indoors with small children. When I die, it won't be heavenly choirs I hear, but the theme tune of "Big Cook Little Cook".

well, I am relieved, fearing that after your Jan 07 post you had given up on life, if not blogs.
Ordering books online, as a customer, is so much better than driving miles to get to a big box store and not finding the book and then a 17-year old clerk with a nose ring telling me the order will take 4-6 weeks.
On December 23rd I ordered, through Amazon, the Historic Atlas of the Pacific Northwest and British Columbia, one copy of which was in Grafton Books in Victoria. Big notices everywhere saying that if you hadn't ordered by Dec 20 your book wouldn't arrive by Christmas, which was fine. It just coincidentally was Christmas. Staggeringly the book arrived the next day, Christmas Eve. How mortifying to think that with all the pre-Christmas rush they had taken the time to find, package up and post my book.
Nothing but good to say about such bookstores.
It would be nice to be snowbound for five days, however, we do winter well here and there is never such luck.

It's good to see a new name on site. I certainly hadn't given up on life - if anything I was embracing it, although my post was a bit maudlin, I'll admit.

We're pathetic at dealing with snow in Britain. I appreciate that this sort of weather only used to happen very occasionally, so it wasn't worth investing in the infrastructure, but it's embarrassing being snowed-in in Sussex.

My brother in Sweden sent me some video taken from the window of his apartment in Stockholm: 2 feet of snow. minus 8 degrees and public transport running as normal.