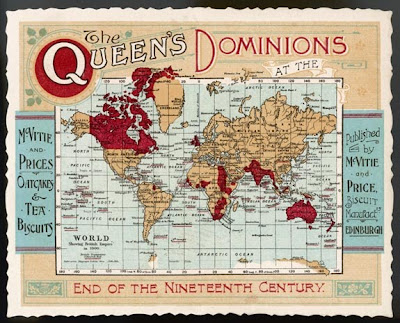 In my last post, Victorian author Mrs Valentine issued a stern warning about the dangers of reading novels. Today, we turn to the subject of Geography which, in spite of its breadth, has been successfully condensed by Mrs Valentine down to 12 pages.

After a brief preamble about the hemispheres, tropics and poles, Madam V gets down to the far meatier subject of foreigners. Here is a short selection of her opinions, written to instruct the young ladies of the British Empire:

INDIA
The people are a mixed race of many nations, very clever and ingenious, and generally gentle and kindly; but, like all heathen people, occasionally very cruel.

SUDAN
The people are black in complexion, rude and uncivilised.

GREECE
The people are clever, lively, and cunning - inclined to brigandage, or robbing in bands - but the upper classes make good merchants.

AUSTRALIA
The native Australians have nearly died out; they were a very inferior race of savages.

LAPLAND
The Lapps are a dwarfish, Mongolian race, seldom exceeding four feet in height. They are ignorant, superstitious, uncivilised and very dirty in their habits.

IRELAND
The People are very brave, passionate, witty, warm-hearted and impulsive. The women are renowned for their morality.

SPAIN
The people are brave, but rather ferocious; proud and jealous.

RUSSIA
The people are gentle and submissive, but untruthful and cruel.

WEST AFRICA
The people are savages, with no religion, but a superstition of fetishes, or charms.

ETHIOPIA
It is inhabited by a barbarous people who are always engaged in petty civil wars.

As far as northern Europe and the "colonies" are concerned, Mrs Valentine has nothing but good to say, praising the natives for their industriousness and honesty. However, she is very quiet on the subject of the United States, perhaps because they had the impudence to desert the Crown.

We can laugh now, but it's terrifying that Mrs Valentine's views were once considered quite normal.
Posted by Steerforth at 9:45 pm

Based on her astute assessment of the Irish, I can only assume she's right about all the others too.

Is it true about the women?

that's not what my mother told me!

Yes. Note she didn't say what kind of morality.

I'm Irish and yes, it's true about the women Steerforth! ;-)

But Mrs Valentine's opinion on the Russians is particularly amusing. How can they be both 'gentle' and 'cruel' simultanously...?