A tatty, leather-bound book on French grammar turned up yesterday: 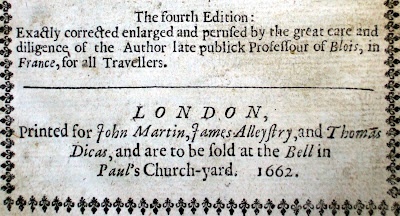 According to Bonham's it isn't worth auctioning as there are a few pages are missing at the back, but I'm sure I won't have any problem selling it.

When this book was published, there were people still alive who had met Shakespeare and future events, like the founding of the United States and the French Revolution, were at least 100 years away. Just holding the book gives me a strange, tingly feeling.

How strange to think that until last year, it would have ended up on a landfill site.
Posted by Steerforth at 10:24 pm

And if you ever need a home for some lost, lonely old book, I'm just on the other side of the Atlantic.

Thats not strange, a book like that, with all its associated history in landfill, is wicked.
Really enjoying these posts about treasure trove. Thank you

Art, I shall bear that in mind - you could be the New York office.

Titian Red - good to see a new name. I shall be visiting your blog regularly.