Another Day in Paradise...

I found a rather enigmatic book of photographs yesterday. It was called Mostecko and was entirely in Czech, with no publication date. At first I couldn't see the point of the book, but I gradually realised that that it was about the building of a new town.

The fashions clearly pointed to the late 1970s, but given that the setting was communist Czechoslovakia, it could have been as late as 1982. This was during a time when Czechoslovakia was one of the most hardline regimes in eastern Europe, so this book is not only a souvenir but also a work of propaganda.

Although my Czech is a little poor, the layout of the photographs created a fairly straightforward visual narrative and the book seemed to be heralding Mostecko as some sort of socialist utopia. Here are a few examples: 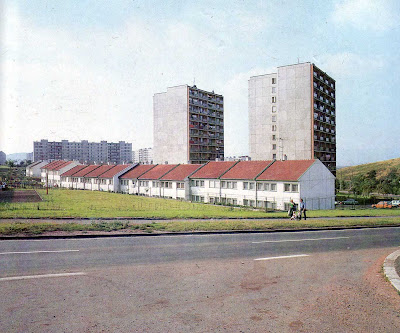 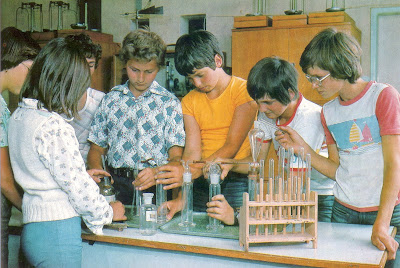 Making Polonium 210, to deal with the enemies of socialism 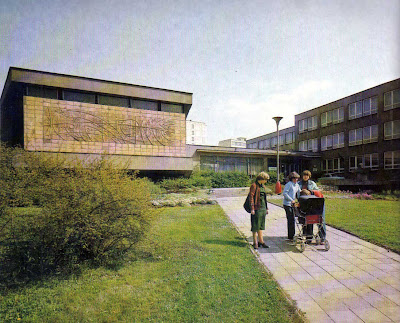 The bustling heart of the New Town district 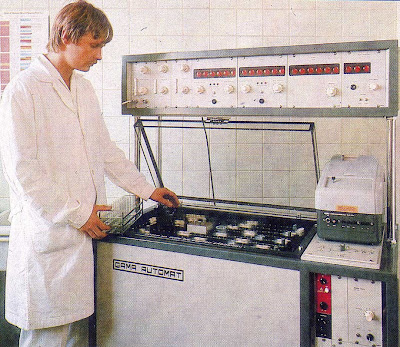 This man used to be Professor of Philosophy at Brno University, but following a slightly critical article he wrote about the 33rd Party Congress, he has been demoted to operating the sausage roll-making machine in Mostecko 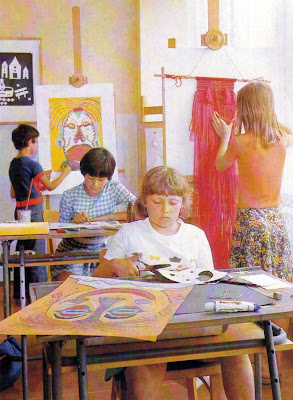 Didn't the book's editors notice that the boy in the background is painting some sort of psychotic, Munchesque face? 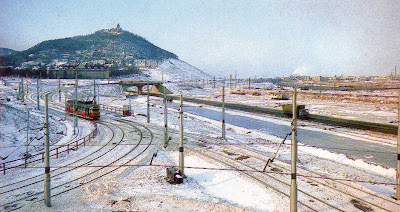 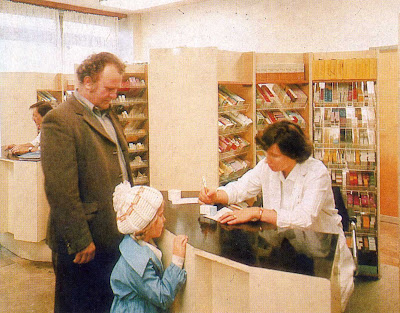 'I am sorry comrade, but the Central Committee have decided that Dr Seuss is an imperialist lackey. Your daughter must only read books that are on the new list.' 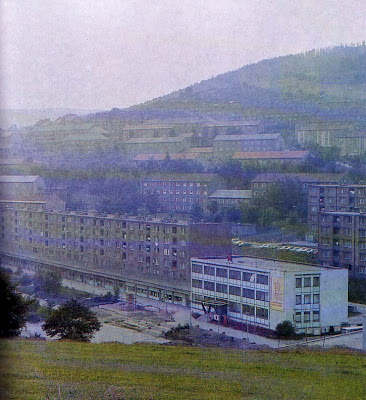 Perhaps I am doing Mostecko a disservice, but the overall effect is of a socialist Purgatory. Why is nobody smiling? The pictures may have been intended as propaganda, but they tell a different story.

If I lived in the Mostecko of the 1980s, I think I'd have to develop a serious drinking problem to cope with the excitement of living there. I wonder what it's like today?

Mostecko does have an Old Town district, which if this picture is anything to go by, isn't quite the bustling metropolis it might once have been: 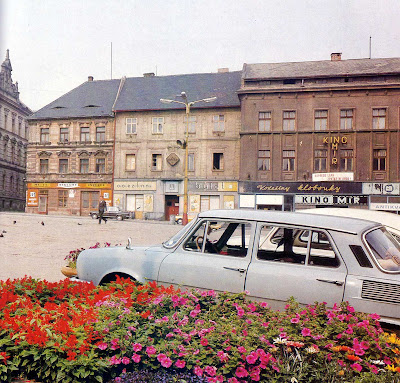 In fairness, there are some awful new towns in England and I'm told that the suburbs of Paris are an object lesson in how not to design a place for people to live. Why is it that planned towns are usually so vastly inferior to those that have evolved over time?
Posted by Steerforth at 8:21 pm

oh I do so enjoy your blog.

What a great find. I love odd old books like that. You're right about the smiling, I didn't notice.

I also think you're largely right about "natural" towns vs. planned ones. You can see a lot of capitalist planning here in the U.S. especially in the west. They do try for a hometown feel, but it ends up corporate logo land much of the time.

Brilliant stuff, Steerforth. Yes, designed towns are invariably soulless wastelands. A good example is Craigavon, new town in NI in the 1960s, now regarded as a failure and a hellhole.

Re the opening point about fashions in the late 70s and early 80s, I've found that our memory tends to set decades in stone when of course they weren't like that - even in 'modern' places, one can look back on photos of people with big hair and large glasses and think, "Oh, that's so 80s!" and it turns out to be 1992. Usually the reality of changing fashions in decades lag behind the retrospective perception by about 5 years.

You cannot 'create' communities on paper - they have to develop over time. When I was in Liverpool I was involved with the campaign to save the "Welsh" streets - rows of Victorian terraces that had been home to Welsh workers and their families brought in during the 1890's to work on the docks, that were earmarked for demolition because it was considered more appropriate to 'design' communities - oblivious to the concept that one already existed.

Yvette Cooper was interviewd on TV and insisted that the only way to create appropriate housing for a whole community was to trash everything that existed and start from scratch on paper....it's never worked in the past, and won't work in the future.

I actually really like that book and it's the sort of thing I would buy - although the girl in the background of the art class image seems to be making stage clothes for Girls Aloud.

Brilliant - great captions. Hate to say it but the bustling heart of the new town looks rather like the bottom end of Stevenage!

Funnily enough I've just finished watching Mon Uncle by Jaques Tati which is about much the same thing, contrasting the vibrant community of the old quarter with the sterile modern development.

or even Mon Oncle - tsk!

I shall have to watch Mon Oncle.

I'm glad to see that there's a consensus on this issue.

CB - I was particularly struck by this in Merced, where the streets really did have no name. At least the weather was nice, which is more than you can say for Mostecko (or Stevenage).

John - I agree up to a point and you only have to look at a crowd scene in a photo from 1967 to realise that most men still had short hair and wore ties. However, the limited range of clothes available to people in Czecholslovakia did exaggerate the time lag.

Richard - you're quite right - didn't Girls Aloud wear something like that when they sang 'Promise?'

The photos reminded me.

It was kind of fun in an ironic way. Love your caption for the child's visit to the Library.

Yes I wonder what socialist Utopia would look like, and would insist on written guarantees that it was better than the photographs before they got my vote!

Visionaries, architectural or otherwise, ache to make a "clean sweep".

My parents fled their fusty "organic" home towns for a new life in a rootless, newly built subdivision in central Florida among neighbors with no common history. Every school I attended was new, built for my young cohort of boomers.

Who are you, when you come from Dommerich Estates, as I do, (no idea who Dommerich was, probably the developer), or from "New Mostecko", Apartment Block B? It's by no means only a socialist dilemma.