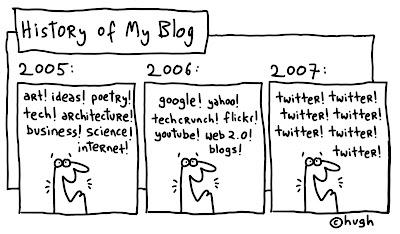 I am still trying to understand the whole Twitter phenomenon. So many of my fellow bloggers have started Tweeting that I feel I must be missing something. Is it the Haiku of blogging?

My objections are threefold. First, I hate the idea of being almost permanently connected to the internet wherever I go. That seems only a few steps away from having a chip inserted in the cerebral cortex and saying 'We are the Borg.' Second, isn't it just an upmarket version of texting? I loathe texting with a passion and whenever I receive a message, I'll phone the sender rather than spend an eternity typing a reply. Third, I don't want to know about the minutiae of someone's daily life.

For example, yesterday Scott Pack shared this little piece of information with the world:

'Think I might get an ice cream on the walk home along the river'.

Perhaps Oscar Wilde would have been a good Tweeter, but who knows, even he may have run out of aphorisms and found himself forced to tell us what Bosie had for lunch.

However I may be completely missing the point. Today, many of us no longer enjoy the feeling of communion with either God or our fellow neighbours and as the egocentricity of youth fades, the sense of isolation increases. Is Twitter a comfort blanket?

Let's go back to Scott Pack spending half a minute typing his ice cream message. I can imagine that there is a pleasure to be derived from sharing this experience with an unknown number of friends and strangers around the world. I certainly enjoy the sense of community that comes with blogging and get excited when I realise that my words have been read by someone in Mongolia (even if they were really just after an image). Is Tweeting any different?

Therfore, in the spirit of Twitter, I am going to tweet about my morning:
That is probably the nearest I'll ever get to Twittering, but it still holds a strange fascination for me, so I am prepared to eat my words.

P.S - I forgot to mention the new Twitter phenomenon, which was reported in the weekend papers - celebrities employing people to Tweet on their behalf. Madness.
Posted by Steerforth at 8:57 am

I'm with you. My wife joined yesterday to see what the fuss is all about and she's been reading me twitters (Is that the right word?) from Stephen Fry but they're really not up to his usual standard. He says he loves it but I really can't see how someone as loquacious as he is sticking with it. At the moment it's the in thing but I simply don't get it. I can suffer Facebook - just - but I cannot see why sensible people are wasting their time on this.

My wife did a search for me and did find one entry which said something like: "I read a poem by Jim Murdoch called Cinders today," and that was it, no link, no nothing. I mean, what's the point?

*shamefaced hangdog expression* Actually I secretly love it. Although not that many Big Celebs are that funny in real life. Rob Brydon and Jimmy Carr quite good value though...

Very low rent twittering on your blog page. But actually strangely fascinating - I had no idea you could mend crack in sinks. (No really!)

I'm not sure if you can. That's what worries me.

Jim, you're right about Stepehn Fry. He's not that interesting on Twitter, although I suspect that his loquacious style isn't at its best in this medium.

Sorry - I got converted a few weeks ago - and it is addictive.

I rather like some of the minutiae of people's lives - Best when given a witty or ironic touch though and a link where appropriate(hate to think what people think of my tweets but I see it as a strictly fun). Plus it's a good way of announcing things - your latest blog post for instance.

You find it taking up more and more time though - S.Fry is boring, Eddie Izzard only comments about the weather - but eventually you'll find some celeb tweeters on your wavelength, a lot of blog friends are out there too, and some people do respond - I got a reply from Gyles Brandreth the other day to a comment I made on one of his tweets! How sad it that?!?

I'll give you another week before you crack like the sink.

I joined Twitter, but now I wonder why. The one application I can see is if you were separated from a friend, or spouse, or whatever, and had an online connection. Since long-distance phone calls are expensive you could Tweet each other. But then, all the world could see what you wrote. Or at least those who follow you. On second thought ...

A man after my own heart. I would sooner die than tweet and also loathe texting with a vengeance even when the text feature on my phone deigns to work.

Still not 100% convinced but Twitter is oddly reassuring (so, not the only writer who spends day pootling with dog btwn periodic bursts of industrious activity), and occasionally hysterical. The trick is to vet who you follow closely to avoid spam/marketing and dull obsessive updaters.

With regard your finding yourself referenced on twitter, I think it might be one of my posts to which you refer. I thought your poem, Cinders, incredibly charming. Not foremost because I myself am called William, nor even for the fact my partner's nickname is Cinders, but more for its beautiful use of language. Your blog directed me, through a number of links, on to several websites, which I spent a great deal of time studying, especially that of Friedrich Schiller's On Naïve and Sentimental Poetry. I learnt a great deal and was greatly interested in the subject. For this I thank you and I'm very sorry I didn't link to your site. I thought by merely mentioning your name and poem, I would create a sense of mystery and intrigue that people might choose to investigate. I have since received proof that it worked! I will add a link in due course.

I don't believe you're the best judge of that which is novel and that which is dull.... It's clear from your rantings that there is much living for you to do. Perhaps you shouldn't write merely for the sake of stringing together words in order to clothe yourself in a particular garb.