The light at the end of the tunnel... 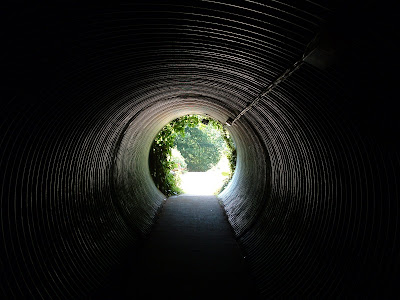 After a year of being unemployed I have a new job. I received the good news this morning and although I should feel elated, the whole thing feels quite unreal because the job is almost too good to be true.

I will be working with an internet bookseller, setting up a project to ensure that charities are not losing revenue from failing to identify rare and collectible titles that have been donated to their shops. In other words, I will be selling books for an ethical, carbon neutral company and raising money for charity.

There must be a catch somewhere.

After a year of being unemployed, this is a huge relief. When I walked out of Waterstone's I always hoped that I would find a better job reasonably quickly, but there was the nagging doubt that I might never find a decent job again. Suppose I was just crap? Maybe I'd never work again.

The financial hardships of being unemployed shouldn't be underestimated, but I agree with some recent research that was discussed on Radio Four a few weeks ago, which concluded that 80% of the stress of losing a job stemmed from the loss of status and sense of purpose. No matter what you have achieved in your working life, unless you have inexhaustible reserves of self-esteem, unemployment is an extremely demoralising experience. It is remarkable how quickly you can lose your confidence.

I tried to keep busy. In addition to having two young sons to preoccupy me, I did voluntary work as a magistrate and enrolled on a web-design course. These things helped, but none of them provided me with an answer to the dreaded question: 'What do you do?'. I felt a latent sense of guilt and shame, even though I knew it was irrational. I had paid taxes for years and was entitled to a state benefits, but I still felt uncomfortable about being one of the people who was taking.

Being unemployed was better than working for Waterstone's, but it was a Faustian pact that would have eventually ended in tears. If you are unemployed, the Government give you just about enough money to pay the bills and feed yourself, but no more. It is the death of hope.

Unfortunately, some people are so traumatised by their experiences of work that they would rather live in poverty than risk endangering their mental health. During the last year I met several who were intelligent and capable, but had been broken by their experiences. The Daily Mail would have labelled them 'dole scroungers', but they were courageous individuals who had been through the most awful experiences.

I met one young woman who had lived more in her 22 years than most people had in their entire lives. At the age of 14 she suffered from brain encephalitis and lost most of her motor functions. She had to relearn speech and at the age of 16, had the IQ of a ten-year-old. In spite of this she was sent to a tertiary college where she entered into a relationship with a man who abused her repeatedly. She eventually developed a pyschotic illness and was hospitalised for a long time.

I met her at a course that was designed to help people find work and was struck by her intelligence, humour and lack of self-pity. I have no doubt that she will find a job, but I met others who were, frankly, no-hopers. One woman was even sacked from an unpaid, voluntary job. I could see why, but on closer acquaintance she emerged as an unusual, interesting person. I couldn't help feeling that her inability to find work was an indictment of modern society which, for all its equal rights legislation and inclusivity, is less tolerant in some ways.

I have learned many things during the past year and feel richer for it, but I am extremely relieved to be back in work. More importantly, it is a job with huge potential and I think I will really enjoy it. It will be hard work, but exhilarating. Imagine: I'll spend every day rumaging through thousands of books looking for gold. Paradise.
Posted by Steerforth at 9:25 am

Congratulations. I've been unemployed for most of the past 18 months and this post really struck a chord with me. Best wishes for the new job.

Btw, have been enjoying your blog for a while now, although I'm not much of a commenter.

Thanks Tim. Good to hear from you.

So pleased for you. It sounds like a wonderful role and they are lucky to have found you to fill it.

As someone who's unhappily employed, congratulations on finding not only a job, but a job you want to do!

Oh what lovely news, congratulations. It sounds like the most perfect job for you. How does it work? Are all the books in one central location or do you see photos or...?

Thanks for your comments.

Sara - the books are in several huge piles and nobody knows what's there. My job will be to identify the key titles and develop systems for quickly uploading them onto a inventory and finding effective ways of selling them.

As for the charity aspect, it isn't like those Christmas cards that give 10p out of a retail price of £3. These books will be generating a significant income for charities, so that gives me a real incentive.

Many congratulations: all power to your slightly foxed flyleaves

Congrats, hope it works out well. I just hope it doesn't eat into your time to write excellent blog entries.

What fantastic news - well done. It sounds like a brilliant and interesting opportunity. I hope you'll be able to keep blogging, we'd love to hear how it's going.
Best wishes.

Congratulations. What a great thing to happen. I've been unemployed in the past and it is amazing how quickly you feel drained. It sounds like a great job doing something worthwhile and skilled. Good luck.

I've been reading your blog for years and this is the first time I've commented. Sorry.

Congratulations! That is brilliant news for you and your family. The new job sounds amazing!

WELL DONE! - and what a fantastic job - I'm really delighted for you, at a later date when the dust has settled I'll tell you a few of the things I've overheard in the local Oxfam shop - they are really throwing themselves into putting their books on ebay, and I have an old supplier who went to work for the British Heart Foundation trying to set up something similar with vinyl.

I just hope it does not impact on the quality of your blog - what with you having less time to roam the Sussex backwaters with a camera.

I'm pleased for you - it sounds an interesting job. Me, I'm still off and despite the fact I'm sick I still feel guilty and that is despite the fact that working myself into the ground for the best part of my life and ignoring three other breakdowns has been the primary cause of my condition and that is despite the fact that I get up every day and insist on going through the motions of work albeit in slow motion these days. And I'm actually starting to come around to the opinion that my inability to stop trying to work is what's stopping me getting better. Ironic, eh?

I've been brought up to believe that working is a fundamental part of who I am but my wife and I both agree that when I am fit I'm to look for part-time work because quality of life is far more important than money. I need to make room for my writing and if I don't it'll only be a matter of time before the cycle begins again.

Congratulations and good luck. I hail from the state with the highest unemployment in the U.S. - Michigan. I have numerous friends and relatives out of work now and it is mind-numbingly unfortunate. The majority of people who have been laid off were not because they didn't do their jobs but because corporate ceo's were not doing theirs.

Oh and: more charities need people like you to do a job like this. I give a lot of review copies of books to charity shops and am amazed at how most of them have a one-price-fits-all policy. I gave a new (actually pre-release) hardback of Penelope Fitzgerald's Letters, cover price £25, to a Marie Curie Cancer Care shop among other titles, and it was last seen on their ALL BOOKS 50p shelf. It could have made them at least a tenner.

Great stuff! Congratulations--be sure to let us know who the bookshop is, so that we can patronise them.

I enjoyed reading about your good news Steerforth - if I can add aswell,very well done -Alison

Steerforth - sorry to be the last to congratulate you (have been a bit out of the blogging world lately), but I am SO PLEASED for you!

This is fantastic news! I hope it is really is everything it's cracked up to be.

I remember when I was a volunteer in Oxfam Bookshop that there were one or two people behind the scenes who researched what looked to be rare books for internet auction and they struck it lucky a few times raising tidy sums with their discoveries and hitting the local papers once or twice (I think £35k was one of their best finds - a rare Graham Greene first ed as I recall).

Everything you say about unemployment is true. Although incredibly busy lately I have been finding that my self-confidence has been wavering and things seem to take me 2-3 times longer than they should. In addition a little of what I can only describe as 'post-traumatic stress disorder' seems to have caught up with me psychologically, determined as I am to try and not take things too personally.

Great news though - your news has really cheered me up! I am only sorry that you were unemployed for so long when you are so obviously highly intelligent, creative and capable.

I do hope you'll manage to keep up your splendid blog still, if only once a week.

It is truly one of the finest!