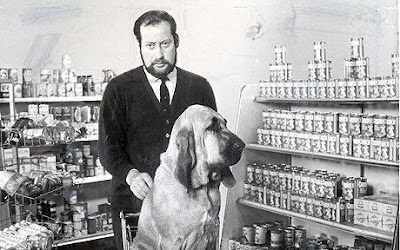 I was sorry to read that Sir Clement Freud has just died. I always enjoyed listening to his lugubrious voice and dry, acerbic wit. His autobiography, Freud Ego, is one of the most enjoyable memoirs I've read.

One of my favourite anecdotes from the book is from Freud's National Service days in the Royal Army, when Freud laboured under the misapprehension that a Private Young was actually Private Jung. It's a slight anecdote, but Freud makes the most of it and the soldier's baffled response to Freud's quip about the likelihood of having a Freud and a Jung in the same platoon is priceless.

To Freud's credit (and to the reader's frustration), he barely mentions his grandfather. Sigmund Freud is remembered fondly as a grandfather who never forgot Clement's birthday, but there are no earth-shattering anecdotes. Clement Freud lived a remarkable enough life without having to trade on his family connections.

Naturally, Freud Ego is out of print (although an optimistic dealer is selling a copy on Amazon for the eccentric price of £143.54). However, I wouldn't be too surprised if there is a reprint.
Posted by Steerforth at 9:32 pm

I rather liked his proposed headstone: 'Best Before ...' Sums up his glorious melancholy sense of humour - will be missed.

I have been a bookseller for many years and Clement Freud was hands down the rudest, most arrogant author that I ever had to deal with.
I doubt if there will be a reprint, they never even published a paperback.

Oh dear. Well, that's changed everything for me.

I remember authors (Jeffrey Archer and Terry Pratchett spring to mind) who could turn on the charm for the public, but weren't particularly popular with the staff.

What a pity that Clem wasn't such a gem after all.