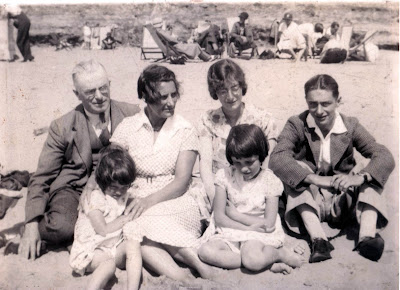 My mother has just been to stay. She is a 79-year-old pensioner who has very different ideas to me and I suspect that I am something of an enigma to her, however she is pleased that I have a 'nice speaking voice'.

It would be easy for me to sneer at her kitsch loo-roll holder with a doll on the top and her views about the 'coloureds', but she is a product of her time. She had a hard life and although she achieved one of the best Eleven Plus results in the borough, my mother never had the benefit of a good education. Since the days of my judgemental teens, I have learned to bite my tongue.

Also, if I'd lived my mum's life, I wouldn't have lasted five minutes.

She had me relatively late in life and there were times when I wished that my parents weren't so old. However, these days I feel fortunate to be able to listen to mother's accounts of growing up in the 1930s and her experiences of life in the Blitz.

I asked my mother to write down her childhood memories and initially she didn't seem too keen on the idea, but a few weeks later a letter arrived in the post containing several pages of spidery handwriting.

Here are a few extracts:

'We lived in a top floor flat and it was a squash. I was the youngest of four. We three girls were in a double bed in Mum and Dad's room. They had to sleep in a 3' 6" bed in the box room, so small you could just get a chest of drawers, a small chair and the bed in. My brother slept in the room only used for Christmas and company. There was no bathroom, so the tin bath came out every Friday night and we washed, checked our hair for fleas and had a dose of syrup of figs to clear the system. Our kitchen was tiny, but we lived in this room.

During the War we all had shelters and every night, for many nights, we had to get out of bed as the siren went and we'd hear the bombs dropping. The 'all-clear' would sound at about 6am and we'd go up to bed for a short sleep before going to school.

One night a bomb dropped on the railway line just yards away and we were woken up to get out of our houses immediately and get to a church hall at the end of the road. There were about 160 of us. We sat there all night and they came round with bread and marge in the morning. We went to my grandma's the next night. She wasn't very pleased, but there was nowhere else to go.

When the area was declared safe, a collection was made for the men who defused the bomb. It came to £2, which didn't seem much for the men who had saved our lives. These men were never recognised for their bravery.

One morning we went to school and found that my sister's best friend - Stella Danby - was killed with her mother and sisters. The father and little boy survived. My sister was inconsolable. It wasn't unusual to arrive in the classroom and see an empty desk.

We had our fair share of bombs and one night the local graveyard was hit. The next day we collected shrapnel and bits of tombstones as souvenirs. My mother was very religious and when she found my collection I was punished severely.

I didn't enjoy school. During the war there was a shortage of teachers and some old maids who had started when Queen Victoria was on the throne were bought out of retirement. They were very severe. Also, when the sirens kept going off, everything had to stop. My sister was in the middle of an exam and had to continue in the shelter.

Food was rationed during the War. We could not get fruit and vegetables were scarce. I was always hungry. We used to love the tins of Spam that came from America. It wasn't like the Spam they have today.

We had a prisoner of war camp for Italians near us. When Italy joined our side the prisoners were free to come and go as they pleased. Quite soon, there were a lot of dark haired babies being born. I remember my aunt looking at a baby and saying "You can tell 'es an Eytie - eyes as black as sloes".'

Last year I read a fascinating book called London at War. I was particularly struck by people's accounts of how hungry they were and how their malnourishment made them vulnerable to colds and flu. Did this tally with my mother's memories? She had never mentioned being terribly hungry. I phoned Mum and she seemed surprised by the question: of course she was always hungry. If she hadn't mentioned the hunger, that was because there was nothing extraordinary about it.

Hopefully, my mother may live for another ten or fifteen years, but just because she's relatively healthy at the moment, I'm not going to take her for granted. Over the years she has told me a lot of stories and I'm going to make sure that they aren't forgotten.
Posted by Steerforth at 6:23 pm

Good stuff. Everyone has interesting stories to tell, it just takes the right person to listen. Have you read Ronald Blythe's book of oral history, Akenfield, Steerforth? I don't know why I think you'd like it, but I do. (Of course I haven't read it myself, just the condensed version that was published recently as a Penguin 'English Journey' and which I think you saw on my blog.)

"She had me relatively late in life" - yes, for the times certainly. But unless I've done my sums wrong she was 34 when she had you - which wouldn't be at all young these days. My wife just had our first baby at the age of 36. Many of my female friends of similar ages are pregnant or new mums.

I remember when we were kids, my mum's best friend got pregnant by accident, and all the talk was about how old she was to be having a baby (her existing children were in their early teens) - so old that there were worries about whether the baby would be OK (actually he needed a kidney transplant at age 10 but that's another story). Recently I did a back calculation and worked out that her age at the time would have been... 36. Blimey.

I meant "wouldn't be at all old these days", of course. Tch.

Yes, times have changed. My parents always seemed old and on several occasions, people thought that my dad was my grandfather.

I became a father at 35, but as most of my son's friends had parents who were the same age or older, it felt perfectly natural.

Thanks for posting that - it was really interesting, both my parents are now dead - my father was very uncomunicative anyway but did tell me a few stories about the Spanish Civil War when I was very young, and likewise my mother told me some stories about the war in the North West - but hated talking about the past - I may blog them myself at some point - as it's only me that was ever interested in them, during the 1970's and 80's - nobody seemed interested in the past.

Both of my parents were also in their mid 30's when I was born ( the eldest of 3 ) and the stigma of having 'old' folks at school was very marked, I remember being really embarrassed at any school event when my parents would have to find their place among the young and trendy mum's and dads, my best friends mum and dad were in a band, my mum and dad came across as ancient - with very dated views and attitudes about society and people.

I teach students in their early twenties and I often wonder how they perceive me.

Really interesting stuff: my grandfather, now dead, was a self-taught multilinguist who worked as a translator for POWs kept in Australia. I wish I'd got more stories from him when alive.

I know what you mean about the sneering: my granny had the loo-roll cover AND the dodgy political views, but I only ever challenged her over the former. And *her* mother caught a German spy, but that's another story...

Richard - yes, I remember feeling acutely embarrassed when my parents turned up at school, with their 1950s clothes and hairstyles.

My dad made things even worse by driving a Morris Oxford - I desperately wanted him to buy a snazzy, Sweeney-style Ford Cortina.

Tim - A German spy? I have to know more.

James - What languages did your grandfather speak?

Fascinating. And she's a pretty good narrator for someone with little education too.

What a luxury a loo roll warmer with a dolly on the top must seem to someone who's endured such privation! It is easy to see why all these kitsch knick-knacks were like miracles when first acquired to adorn little palaces where everyone had their own room and own bed at last, cheap tat though they look to the rest of us.

Luckily I have taken the precaution of not having any children to find out what they think of me and my tat in thirtysomething years time ;-)

Very interesting post... I just finished reading Blythe's "Akenfield" and I second the recommendation, it is terrific. Also - he lives in the painter John Nash's house. I just read your post on Nash. Most of Blythe's books have Nash paintings on their covers, and b/w illustrations inside as well. Thought I would pass that along -

Thanks for that. Makes me think of Alan Sillitoe's "Key to the Door".

I knew a woman who lived through the Blitz. Margaret S. of Gravesend, who ended up here in N. Florida as a war bride. She couldn't endure the shelters, and always watched from outside.

One of the best accounts I've read is "Few Eggs and No Oranges: A diary showing how unimportant people in London and Birmingham lived through the war years", by Vere Hodgson.