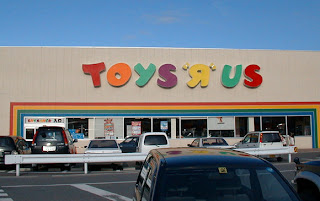 Yesterday I went to the irritatingly-named Toys "R" Us to buy some Christmas presents. I normally refuse point blank to visit shopping malls and superstores, but if I dared to allow selfishness to come between my children and the perfect Christmas, I knew that there would be consequences.

Toys "R" Us is bad enough at the best of times, but the last Thursday before Christmas promised to be hell on earth. The scene would be a Bruegellian nightmare, with crowds of people in flannellete tracksuits pushing and shoving each other. Hideous.

I walked through the door preparing myself for unarmed combat, but to my amazement the place was almost empty. At a glance, I'd say that the ratio of staff to customers was three to one.

The only shoppers I saw were a rather large couple who looked (and smelled) as if they hadn't bothered washing and dressing when they got up, a woman who was so busy texting that she lost her two-year-old son twice within five minutes, a man who looked uncannily like Max Clifford and a chav couple who stood on either side of me and shouted at each other, almost deafening me in the process.

If anyone needed tangible evidence of a recession, it was here.

Later, I visited Woolworths. They seemed to be selling an awful lot of electric fans, reduced from £5.99 to £3.49. I didn't buy anything.

Most of our Christmas presents have been ordered from Amazon, which wouldn't have bothered me until last Sunday, when I read this article in the Sunday Times. According to an investigation by undercover reporters, workers in Amazon's UK depots are being forced to work seven days in a row and are penalised for being off sick, even if they produce a doctor's note. I love Amazon, but this has really put me off them and I will try and find a more ethical way of buying books, like this supplier.

I don't really want anything for Christmas (unless you include a flat stomach and the ability to travel through time) but if I did have a Christmas list, it would include the following: 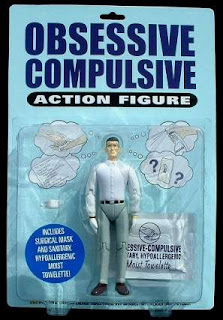 Action Man is boring. Obsessive-Compulsive Man is far more interesting, finding danger in the most incongruous situations. I have several friends with OCD and they'd love it.

I don't think that the above picture conveys the sheer genius of the Angry Mob Playset. As you can see below, they can angrily surround the most incongruous object and wave their torches and pitchforks in a thoroughly malevolent manner: 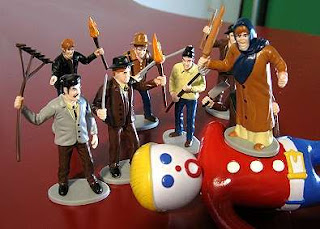 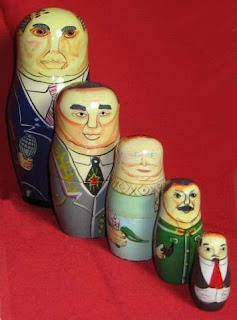 These Communist Russian dolls are a wonderful idea. It's a shame that Andropov and the other bloke (Chernyenko?) couldn't have been included, even if they were only chosen because they were terminally ill.

The Freud Action Figure would complement the OCD figure perfectly. The Freud figure could spend hours analysisng OCD Man, only to be superceeded by Cognitive Behavioural Therapy Man (this figure isn't available yet, but it's only a matter of time).

I'm not quite sure what the rational is behind the Flying Monkey: 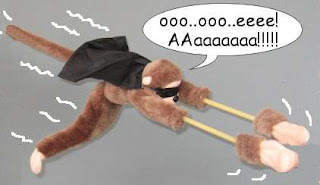 It is launched from the wrist, like a flying disc. I imagine that the joke would wear thin after a few minutes, unless you're like my late father-in-law, who continued to find his remote- controlled farting machine hilarious after several years.

I'd rather have something that would still give me pleasure in 20 years' time. This, perhaps: 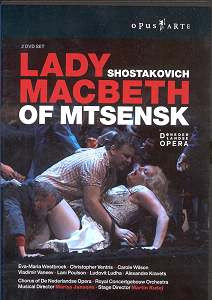 Posted by Steerforth at 5:48 pm

I bought one of my sons the flying monkey this year. It is "lost" now, o dear. That screechy monkey noise made me want to hurt people. Avoid at all costs.

Where does one get a Freud action figure? And can you get a Jung and make them fight?

Brilliant products Steerforth - I think you should open up an outlet selling them all!

I only ever buy stuff from Amazon/anywhere on line that I cannot find in a terrestrial shop - internet buying is annoying as it mostly charges postage on top, you're always out when the stuff is delivered and then they always want pesky 'feedback'. It will never supplant proper shops for me. Proper shops just have to be cleverer about what they sell and stop apeing each other/over-diversifying so that they do nothing well.