The Ladybird Book of the Recession 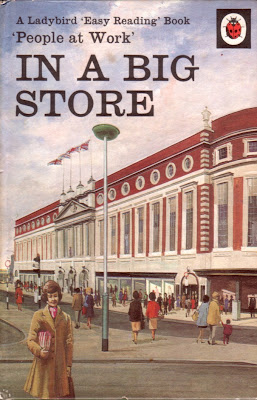 This is a department store. It sells clothes, electrical goods, furniture, food, books, records and toys.

Hundreds of people work in the store.

The store makes thousands of pounds every day, but it also costs a lot of money to run .
People like visiting the store, but they prefer to buy things elsewhere. 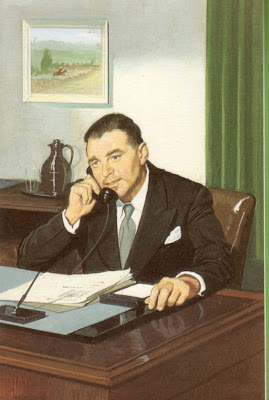 The man in charge of the store is called the General Manager.

He is being told that fewer people are buying things in the store than last year. 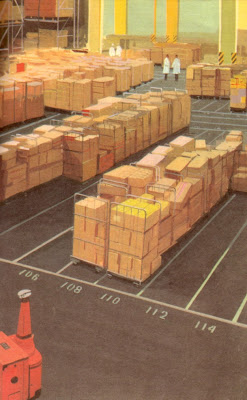 This building is a warehouse belonging to a new type of shop.

This shop has no branches, but sells things to people who have computers. When a customer buys something, it is put in a box and sent to their home.

This is called internet shopping.

Internet shopping is cheaper because there are no shops to pay for. 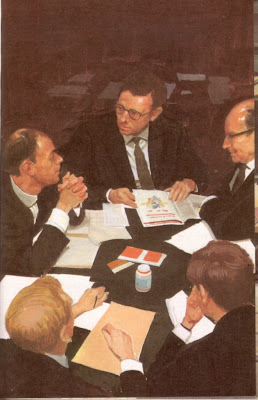 These men are very important. They are called directors and pay themselves a lot of money.

The directors are talking about how they can stop the store from closing.

They either need to sell more things or spend less money running the store. 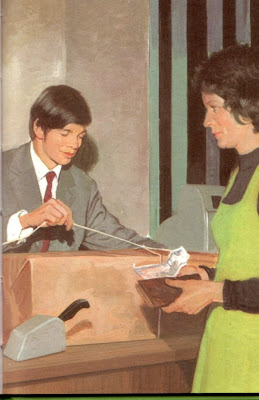 This is Colin. He is very polite and enjoys gift-wrapping things for customers, but he does it very slowly.

The store can save money if it gets rid of Colin. 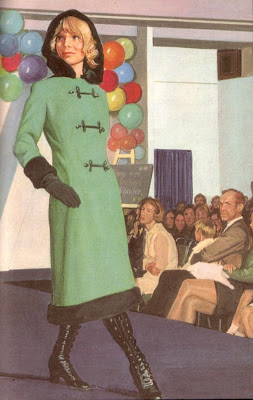 This is a fashion show, where customers can see new clothes.

The man in the front is very interested in the pretty lady's green coat, but he knows that it will be cheaper on the internet. 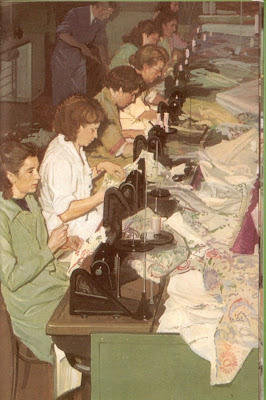 The lady's green coat costs £459. That is also how much each of these women are paid in a year.

This is called a sweat shop. In a sweat shop people work very hard to make clothes that can be sold for much more money than they cost to make.

The internet shop sells the green coat for £195. 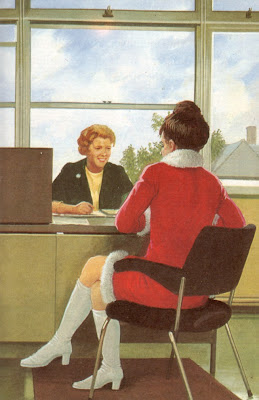 Miss Pettiman works in the Human Resources department. She is telling Pam that the store cannot afford to employ her any more.

Pam is very upset. She has just bought a house with her husband . 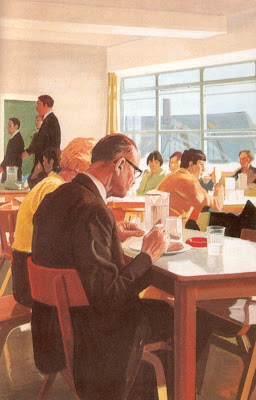 Stanley Meakins has worked in the store for 44 years.

He is unhappy because he is going to be replaced by a computer.

With fewer staff, the store will lose less money.

But unless it can sell things at the same price as the internet shop, the store may still have to close.
Posted by Steerforth at 12:25 am

I think you should sell this book on the internet!

Mind you the internet could well be in meltdown and fraud is rife as well, so it has its disadvantages.

In addition a bit like reading books online, there will always be those like you and I who prefer real books/do not wish to look at a screen 24/7 however good the resolution becomes. The human need for tactility and examining the goods/the social interaction of shopping should also not be underestimated.

The big store is now a boarded up wine bar and empty luxury flats, this is called progress.

First class post, thank you. A great way to start the New Year.

Brilliant. I do love those old Ladybird pictures as well, very evocative.

A very good book for the young ones to read, perhaps the little shop in the needlemakers might sell the new revised edition!

I dread to think how much money I've spent in the Needlemakers on Ladybird books.

After a while they started giving me a discount for bulk buying.

Brilliant and sad. You really could sell this as a real book, I'm sure.

I love it! I'm going now and telling all my friends!

I searched Amazon.com for hours but couldn't find this anywhere.

Wonderful post. I do love the Ladybird pictures. I'd really like to see one of the original books, too.

Thanks to the large print runs, Ladybird books are easy to find on eBay and similar sites and they're fairly cheap too.

Prints from this book (and all other Ladybirds) are available here.

I've just deleted a comment from a 'Ronnie Fairweather' only to discover that he is a real person who works for Penguin Books.

Brilliantly put.You should team up with Mary Portas!

Thanks. I expect the store is now a Poundland or Weatherspoons now.

this should be in every school, thank you

I was watching a documentary about Ladybird which in turn caused me to find this.
Excellent! A great pastiche. I would certainly buy this, from a bookshop of course!

Thanks Michael - It almost became a book, but sadly it wasn't to be as someone at the publisher didn't see the funny side of it. Oh well, never mind.