During a recent visit to Camilla's Bookshop in Eastbourne, I found this novel by Richard Condon: 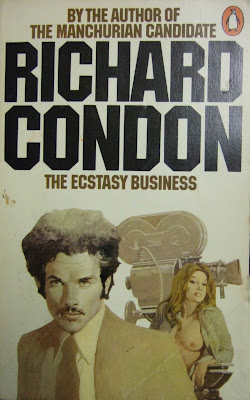 It reminded how much superfluous nudity there used to be on book covers, before feminism, AIDS and the new conservatism of the 80s changed the cultural climate.

When I was fourteen my parents booked a week at a holiday cottage in Somerset. The owners had a large bookcase of paperback fiction and to me, coming from a house without books, it was an object of great curiosity. I went through the whole collection of novels and was particularly excited by the sexy cover designs, which seemed to promise so much: 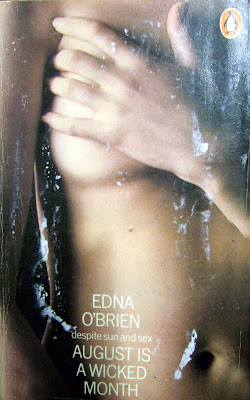 I flicked through all of the Edna O'Briens, hoping to find some naughty bits that would give me an insight into what adults were getting up to. The covers suggested that people were at it all of the time, but the contents were generally disappointing. Even the Dennis Wheatley horror novels were extremely chaste, compared to their salacious covers: 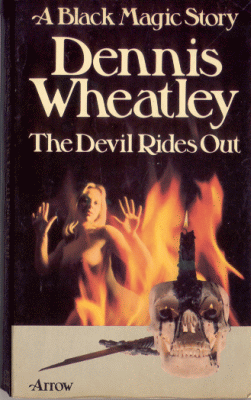 Like real life, these novels promised so much and delivered so little. Breasts occasionally heaved and manhoods throbbed, but I was still none the wiser about what would be expected of me. Men seemed to 'take' women who, after an initial attempt at resistance, succumbed with half-closed eyes. I was confused. Wasn't that called rape?

Films didn't make things any clearer. Men behaved like complete bastards, women slapped them in the face and then they had a snog. If it was a French film, these actions were accompanied by long, convoluted conversations and chain smoking. I compared these people to my parents, who liked going to garden centres and Brentford Nylons. Where did I fit into all this?

A few years later a bookshop opened at the end of my road. It was absurdly small, but had a stock that was chosen by someone who clearly knew what he was doing. I went in out of curiosity and, for reasons I can't remember, ended up buying Turgenev's Spring Torrents. I'd never read a novel before and had no idea who Turgenev was, but his descriptions of people falling in love seemed to make much more sense than the worlds of Sidney Sheldon and Jackie Collins.

The Richard Condon and Edna O'Brien novels look rather incongruous amongst the respectable orange Penguins in Camilla's. I wondered how long they'd been on the shelf and was almost tempted to buy them just for the covers, but I got distracted by this: 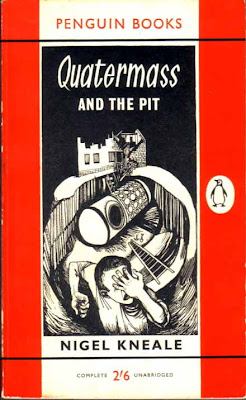 The complete original script, on sale for a mere £1.50. A superb cover too, without a nipple in sight.
Posted by Steerforth at 5:15 pm

Those Edna O'Brien covers are VERy nippley, and every second-hand bookshop in the world seems to have an extensive selection. Love that Kneale cover. I need to watch Quatermass.

I recall being embarassed at reading Edna O'Brien and the like in public because I wondered what the non-literary would think I was up to! I used to choose my 'book for the train' as much for its cover as its contents!
As for Quatermass - we didn't have a TV when Quatermass was all the rage and I felt really out of it at school because all my friends would spend ages discussing it. If only I had known there was a book!

I feel obliged to say for girls growing up in the 80's - our bible was 'Forever' by Judy Blume. '...and then she felt something hard against her and knew it wasn't his car keys. Ralph!' Really.

Tatty, was that the one with the sex/playground scene? In our high school library that was the most popular book, always falling open to that page.

I think I remember the jacket of Forever.Did it have a young man wearing a stripy top on it?

Ha, Yes I think the jacket maybe did have a man on it - don't remember bit about school - definitely was parking in it, but memory not fantastic now am old.
Can't remember what actual characters were called either...

Spit! I'm jealous of the Quatermas and the Pit Penguin.

Oh dear, I'm sure you were in therapy for years...

You're quite right about how confusing it all was though.