Old people aren't what they used to be

Old people are very fond of moaning about declining standards, but it's time they took a good look at themselves. In my day, old people wore hats and dressed smartly, even when they were just popping out to post a letter. Take my grandfather, for example. He was a proper Cockney and spent his working life as an unskilled labourer, but he wouldn't have dreamed of going out without a hat and tie: 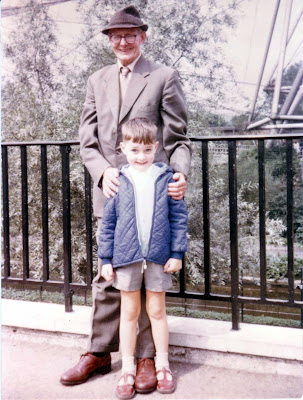 Compare him to today's old men and it is clear that sartorial standards have declined: 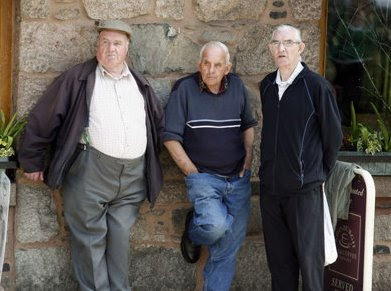 How can the young be expected to behave well when their elders are setting such a bad example? Something has to be done; but what?

I would like to see Britain's old men wearing tweeds, accompanied by appropriate hats and, perhaps, a meerschaum pipe. Obviously it would be wrong to force people to dress in this manner, but perhaps the Government could provide an incentive of some sort, like free Werther's Originals to anyone who conformed to the stipulated code.

I would also encourage facial hair, however it would have to be stressed that an unruly beard full of dried soup would be worse than no beard at all. Ideally, a neat, well-groomed moustache would complement the country casuals perfectly.

As for old ladies, I would like to see a return to sensible, muted tones and hats that looked slightly silly, in an endearing way. The garish coats with clashing colours, bought from mail order adverts in the Radio Times, would have to go. Facial hair, although common, would not be encouraged.

In return for adopting a more dignified countenance, I would ensure that our elders were given the respect that previous generations of retired people enjoyed. It's a win-win situation.

Apart from the death thing, I can't wait to be old. I would love to parade around town in a deerstalker and plus fours, spending my evenings reading by a log fire. 30 years seems an awfully long time to wait. Supposing I'm struck down by cancer before I even get a chance to pop down to the gentlemen's outfitters? I will feel cheated.
Posted by Steerforth at 5:11 pm

With me it's the trilby. It looks like your granddad has one on and my father always wore one. I just keep waiting patiently till I get to an age when I can carry one off without people looking at me. Of course it has to be the right kind of trilby, not too smart, lived in with the lip turned down slightly to give it a jaunty edge the way my dad always wore his. I have one of his old hats - actually his good hat - on the top of one of the bookcases in my office. It's too small for me but I keep it there as a constant reminder.

I'm polishing my twinset as we speak. Margaret Rutherford is my idol.

I believe The Idler magazine has many of the same aims in its manifesto directed at the sartorially-challenged. Sadly it is a boys-only club.

One of the few joys of flying is seeing old people on board in traveling clothes, or at least dressed properly to treat the miracle of flight with the respect it is due.

You're never too young to start wearing tweed.

I'm looking forward to being able to shout "You're a very rude young man!!!" at people, presumably mostly men, although with my declining eyesight who knows - I may be shouting at pillarboxes. Also to being able to talk to myself without having to pretend I am talking to the cat.

Old boy, I could not agree more.

The state of the some of the East Sussex oldies is beyond belief.

Moreover, why are they out in Waitrose or (whisper it) Tesco clad in tracksuit bottoms and old jumpers, not a tie or necklace in sight?

Standards are slipping. Too many pub lunches, too much water under the bridge, old bean. . .

Well, it seems that I'm not the only one who thinks that old age is wasted on the elderly.

Maybe I will get those plus fours after all.

I laughed right out loud! Great post. Perhaps you should send it, photos and all to The Oldie?!