A few days ago I finished David Karp's One - a novel about the role of an individual in a totalitarian society. It seemed to be heavily influenced by Nineteen Eighty-Four, but whether the author had read Orwell's book (which was published five years earlier) or not, I didn't feel that it diminished the integrity of Karp's vision. Why was this novel out of print?

I discovered that David Karp had written six novels, but in his mid-40s, switched to writing for television. Why did Karp abandon books? Also, why was it so hard to find any information about David Karp on the internet? The logical explanation was that One was an accomplished, but derivative first novel, which was never equalled by its successors. I decided to put my theory to the test and read another Karp novel. Once again, Camilla's Bookshop in Eastbourne came up trumps: 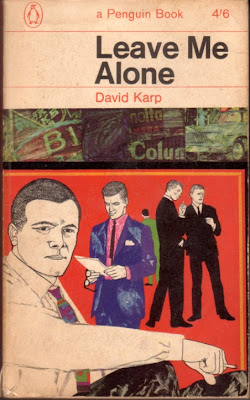 I am only a third of the way into Leave Me Alone, but so far it is excellent. Set in the world of publishing, this novel reminds me strongly of Richard Yates. Like Yates, David Karp has a gift for depicting the plight of the mildly talented, burdened with artistic sensibility and the painful, growing realisation of their own mediocrity.

I'm absolutely certain that if it was reissued, Leave Me Alone would appeal to a new generation of readers. The Richard Yates revival shows that there is an appetite for this sort of fiction and the popularity of Mad Men clearly demonstrates how fascinated people are by the New York of 50 years ago.

However, I'm not sure if any publishers read this blog. When I worked for Waterstone's I tried to keep a low profile in the book trade, as I knew that my employers were quite paranoid about blogs. Indeed, when one of my colleagues wrote a mildly critical comment on her blog about G.P.Taylor, she received a visit from the Waterstone's Human Resources department.

Now that I'm a free man, perhaps I should write some inflammatory posts about people in the book trade to attract attention and, hopefully, bring authors like David Karp and John Christopher to the attention of publishers. I could mention how grumpy Terry Pratchett is (or how offensive some people find G.P.Taylor) and point out that bestselling children's author Lucy Daniels is actually two gay men in Notting Hill. I wouldn't bother saying anything about how obnoxious Jeffrey Archer is, as that would be no surprise to anyone. However, fans of Emma Blair might be shocked to learn that the good lady is a burly, Glaswegian gentleman who used to serve in the British Army. I could also mention how one publisher tried to sell the latest John Francombe novel to me on the basis that they'd 'changed the ghostwriter'.

But would any of this make any difference?

In the meantime, I shall continue to read Leave Me Alone and I have also just received a copy of Sleepwalkers - a reasonable 4/- to all opponents of Base 10: 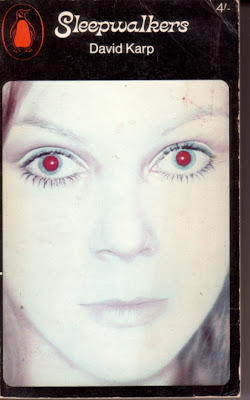 I apologise if I seem to have a monomania (I love that word) about David Karp. I just can't believe that such an accomplished author is so unjustly neglected. If anyone can provide me with an answer, I'd be interested to hear it. In the meantime, read One!
Posted by Steerforth at 6:22 pm

Why is 'derivative' such a bad thing to be? Everything derives from something even, as I never tire pointing out, Nineteen Eighty-Four.

Sounds interesting; I'll look Karp's work out. In the meantime, why not raise his profile- and your own - by dishing more dirt on the publishing world?

Yes, you're quite right Jim. What matters most is the end result. However, if 'One ' was written without being influenced by Orwell, then it makes it all the more remarkable.

Charles - I would gladly dish the dirt (my meetings with publishing reps were always 75% gossip and 25% books), although sadly the best anecdotes are, naturally, unrepeatble.

I'll try and think of a few more anecdotes.

I think Leave Me Alone appeals to me more than One, so I might try it. How have the second two-thirds gone, Steerforth?

From your description of the similarities between this and Yates, I'd recommend to you Sloan Wilson's The Man in the Gray Flannel Suit if you haven't read it. And it has been reissued by Penguin in their Modern Classics range!

Incidentally, as you probably know from the Wikipedia article, Karp also wrote books (crime fiction?) under the name Wallace Ware: titles include Charka Memorial and The Brotherhood of Velvet.

No, I haven't read it. Thanks for the recommendation.

I've read most of 'Leave Me Alone' and fortunately the novel lives up to its initial promise.

I've also got a 2nd-hand copy coming in the post, thanks to your recommendation.

Reading a review of 'Mad Men' this morning, the association between this film and Karp's 'Leave Me Alone' immediately occurred to me.

I was surprized to find so few references to David Karp on the web. The Wiki entry for Karp is pretty sparse, too. (It has hyperlinks to 'emphysema' and 'Manhattan', etc., but nothing about 'Leave Me Alone'- an expertly crafted novel calling out for a new edition). Someone needs to begin a stub entry for it on Wikipedia.

I think the remainder of Karp's oeuvre gives a clue as to why he disappeared into obscurity: novels about conspiracy theories and Stalin's death, retro TV series and other ephemeral stuff. Did Karp succumb to the kind of mediocrity he portrayed in 'I Want To Be Alone'?

Incidentally, fabulous
reproduction of the 60's minimalist cover for the Penguin edition of the novel.

I just finished reading 'one' after stumbling upon it accidentally and am stunned that it isn't a btter known work, it almost seems as if it has been deliberately put out of print because of it's message! I have just bough 'sleepwalkers' and now endeavor to read all his novels. Ps. I live in Eastbourne!

I just finished reading 'one' after stumbling upon it accidentally and am stunned that it isn't a btter known work, it almost seems as if it has been deliberately put out of print because of it's message! I have just bough 'sleepwalkers' and now endeavor to read all his novels. Ps. I live in Eastbourne!

I've read two of David Karp's novels : One and Day of the Monkey, both of which were televised on Brtish TV in the 1950s.

I can't make up my mind whether One was derived from 1984 or not. But quite frankly I don't care, as One is still the better novel!

I also am annoyed that there seems to be a lack of info on this great negleted American author on the Web, and also, although I own a dog=eared copy of One, I'm unable to obtain a copy of Day of the Monkey or any copy of David Karps other novels.

I have only recently read One and am also puzzled by how unknown both this book and the author seem to be. I'm sure Karp was influenced by 1984, however I don't feel that this detracts from One as a great piece of dystopian literature. I have just ordered some more of his books, which are relatively difficult to get hold of. I wish someone with the power would shake things up a bit and get these books back into print, or at least into some kind of Ebook format. Coincidentally, I had also just started reading/buying some of John Christopher's books and was also surprised I had not come across him before as his post-apocalyptic work is more than competent. What are these publishers doing allowing these and many other authors to fade into obscurity when we have the technology now for print-on-demand or Ebook formats, which should ensure any worthy writer lives on?

Unknown - Publishers are frantically digitising their backlists (some of them are even ordering their books from me, as they've lost their original copies), so I can only hope that it's just a matter of time before David Karp and John Christopher's backlists are fully available.

Luckily, John Christopher lived long enough to witness the revival of interest in his work and even posted a comment on this blog. But in over five years, I've had no comments from anyone connected with David Karp.

That seems odd, as if you Google his name, my blog entries are near the top of the list (a bad sign if an obscure blog is one of the main sources of information).

I looked at Leave Me Alone only the other week and once again, was struck by the quality of the writing. Not quite Stoner, but still pretty good.

As far as One is concerned, even if it is heavily influenced by Orwell, it's still a good novel. I like the fact that the oppression is more subtle and seemingly benign - far more menacing, in some ways.

Steerforth - I'm glad to hear publishers are in the process of digitising their backlists. I hope they do a thorough job.

It's a pity no-one related to David Karp has come forward to help revive his work - it deserves a much higher profile and really belongs up there with the works of Orwell, Huxley and Zamyatin.

Further to your mentioning the frantic digitisation of backlists occurring, yesterday I accidentally came across an option on Amazon, which you can click to alert publishers that you want a title to be made available on Kindle. I spent quite a while looking up currently unavailable titles, including several by David Karp, John Christopher and Helen Hoover, and clicking away.