Grey is the Colour of Hope?

I've been receiving some careers guidance recently and it has been very useful. Within four weeks I have gone from having no idea what to do with my life to being in a position where I am ready to start training for a new career. Best of all, this advice has been completely free.

During my first session I completed a detailed questionnaire on a computer, which then produced a report saying that I should do a job that involves writing. It also said that the job I was least suited to was working in a shop. Oh dear. Were all those years in bookselling a waste of time?

Today's session was meant to be in Lewes, but at the last minute it was changed to Newhaven. My heart sank.

Although it is only eight miles from Lewes, culturally, Newhaven is on another continent, with a landscape that is unremittingly bleak. Once a thriving port, it is now a depressed town full of charity shops, boarded-up buildings and retail parks. 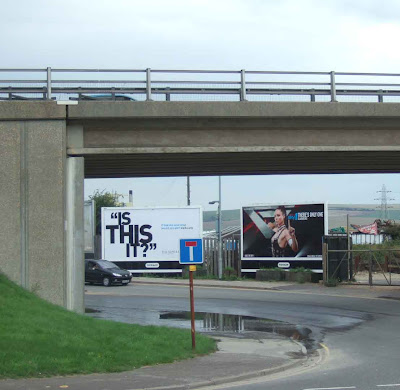 The billboard says 'IS THIS IT?'. The answer, I'm afraid, is yes. The poster is crying out for some wag to add a SH to the last word. 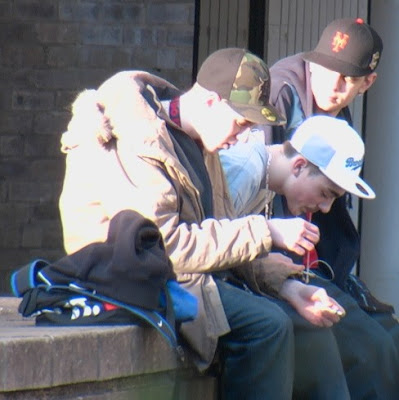 I arrived at midday. After parking my car I opened a door to a stairwell and was met by a stench of rancid urine. I decided to walk down the ramps instead and as I left the car park, was greeted by a dozen chavs sitting on a bench. I would have loved to photograph them, but I chickened out as I already have enough dental problems. They looked a lot rougher than the young men above and were busy playing with their pit bull terriers and drinking lager. One of them had a toddler in a pushchair.

The people in Newhaven wore strange, shoddy clothes and were either obese or had that gaunt, drawn look that accompanies substance abuse. I contrasted them with the affluent, attractive, well dressed denizens of Lewes and thought of some of my friends who claim that class isn't an issue any more. 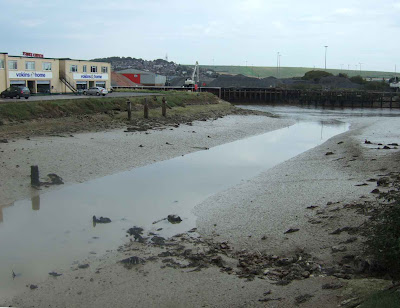 This is the River Ouse, which is actually very pleasant a few miles upstream. Here the scene is one of desolation and looks more like one of the more obscure former Soviet republics. The ferry service to France still operates and I can only wonder what the French must think as they catch their first glimpses of England, which include an abandoned warehouse with smashed windows. 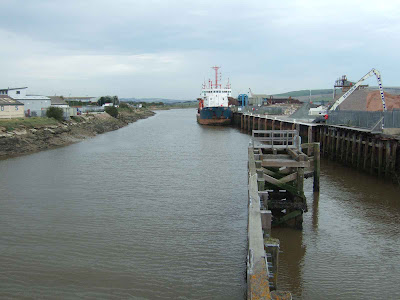 A few miles to the east, the Cuckmere estuary is one of the most scenic places on the south coast. Sadly this part of the coast has been completely ruined. The muddy river banks are littered with traffic ones, shopping trolleys and scrap metal and the atmosphere is one of decay. There is talk of regenerating Newhaven and a block of swanky 'apartments' have been built by the seafront, but the town is also shortly going to be graced with an incinerator, pumping toxic fumes into air. 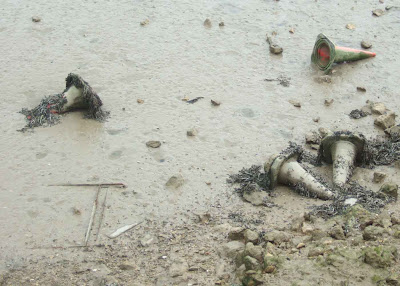 What could be done to improve Newhaven, short of using atomic weapons? I don't know. There are some nice Victorian houses tucked away and perhaps they would attract a better mix of people if the town was redeveloped, but it would cost a fortune to really improve Newhaven. Vast tracts of land would have to be flattened and replaced with a mixture of parks and leisure facilities. Also, to convert the seafront from a decayed port to a vibrant coastal town would take years.

But it would be worth it.

I wouldn't like to visit Newhaven on a Friday night. I didn't feel particularly comfortable being there on a Tuesday afternoon and saw several people glare at me (was it the pink cravat?). However, I did see one smiling face that cheered me up: 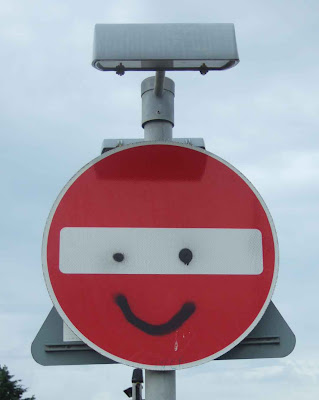 Posted by Steerforth at 3:10 pm

Hello - thank you, that's one place to cross off my 'to see' list househunting. Do like the no entry sign though - why don't they do that to all of them?

I did find one gem of culture in Newhaven, i worked with the Parker Pen company on a design project about 8 years ago - just before Gillette bought ( and ruined ) the company - and when design and marketing was still based at the Newhaven factory. They had a little museum of the Parker Pen and at one time kept all the spares for every Parker Pen that went into production - you could just send your trusty fountain pen in for repairs, it was magical.

I did read recently that there were some sea front developments at Newhaven, but I still couldn't bear the thought of living there.

You are right to appreciate living in Lewes...it's really NOT like everywhere else.

sic the careers advice, I think your 'Notes From Inside A Small Island' could be a runaway bestseller Steerforth! Look up Bill Bryson's agent/publisher as a first step.

And your booktrade knowledge surely the way forward re knowing exactly how to market it. Have you also heard of a group called 'Bloggers with Bookdeals'? I don't have the exact link to hand but I'm sure they will come up if you Google them.

Kate - I'm sure that if enough of us get together, the smiley face road sign could become a reality. Labour will do anything to get re-elected.

Richard - I had no idea that Newhaven had an association with Parker pens. In our wasteful, disposable age I love the idea of being able to send a pen in for repairs.

Laura - Thank you for your kind words. Unfortunately, all those years of bookselling have put me off writing a book, as I have seen too many books (most of which were better than anything I could write) end up being sent to the pulping machine. I shall try and be more positive.

I still harbour a secret desire to write something and looked up 'Bloggers with Bookdeals', but couldn't find a relevant link.

If you think Newhaven's dispiriting you should try Toxteth - I once had to give a cigarette to a feral 7-year-old with the wizened face of a tiny old man, because I feared that if I didn't, he'd stab me with the sharpened screwdriver he was waving. So unlike the home life of our own dear queen.

Gosh - I lived in Toxteth for a while, and some of my friends still do. It's 'like 28 Days later'.

There are some beautiful buildings and churches - some wonderful houses and a few really nice pubs - The Peter Kavanagh on Egerton Street is superb, but you really need to 'dress down'...if you know what I mean.

So are you going to tell us what the new career is?

And when oh when are we going to get a post from you on the Lewes pound, which frankly is the big Lewes issue agitating the national press at the minute? I am all ears...