Nun on the Run

I am trying not to buy books at the moment, as my house is sinking into the ground. The ground floor is already like a basement flat and it is only a matter of time before I have to leave via the upstairs window. However, when you see books like this it's impossible to resist: 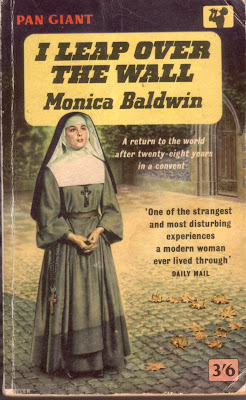 I saw this in a charity shop last week and would have bought it just for the gaudy, sensationalist 1950s cover. It's an added bonus that this is a well-written, fascinating memoir of an extraordinary woman.

Born in 1893, Monica Baldwin was the niece of the British Prime Minister, Stanley Baldwin. In 1914, at the age of 21, she entered a convent and for the next 27 years was completely cut off from the outside world, apart from the occasional visit from 'Uncle Stan' and other family members. Baldwin was barely aware of the First World War and monumental events like the General Strike and votes for women passed her by.

In 1941 she decided to leave her convent (sadly she doesn't say why) and this memoir is an account of her struggle to adapt to a society that had changed beyond all recognition. What makes it such a fascinating read is that Britain in the 1940s is almost as alien to her as is to us and she observes fascinating details that her contemporaries would probably regard as barely worth mentioning.

I studied my fellow travellers. There were some soldiers, rather red about the ears and smelling of beer and hot khaki, and two or three hatless young women with padded shoulders and purple nails. All had cigarettes between their lips. I had never seen a woman smoke in a railway carriage before. Their skirts were of a shortness which still shocked me a little; but then, my own were, after all, nothing to boast about, if it came to that.

Staying with her aunt in Sussex, Baldwin is determined to get to grips with the modern world and spends her days either listening to the wireless or reading. Evelyn Waugh's Put Out More Flags made her 'gasp and wonder what the world was coming to'.

But I Leap Over the Wall isn't just an outsider's account of Britain in the 1940s. It's also, in the author's words, an attempt to 'write accurately and fairly about life in an enclosed convent' and counter some of the 'fantastically wrong ideas about nuns and convents'.

Like too many good books, Baldwin's memoir is out of print (unless you include an expensive, hardback reprint). Fortunately, because this was a bestseller in its time, it's easy to obtain secondhand copies of I Leap Over the Wall from the usual sources. If you particularly want the wonderful Pan cover, look out for the 1957 paperback edition.
Posted by Steerforth at 8:53 am

Fantastic jacket indeed! I love the fiendish bookselling technique of the 1950's - make everything look like a salacious adventure, even if it's non-fiction! I wonder how that affected sales for both.

I have a similar paperback about the exploits of WWII navy diver/hero Buster Crabbe before he disappeared mysteriously (though there was definite true-life adventure there, so perhaps the marketing was spot-on in his case)

She sounds an interesting lady and it's always fascinating how there's nothing new under the sun re wondering 'what the world is coming to', whatever the era & how she had that unusual objectivity about life. Did she ever marry?

Yes, I've heard that 'The Spiral Staircase' is really good. I shall add nun memoirs to apocalyptic fiction on my list of interests.

Laura - I can't find out anything about Monica Baldwin, except that she moved to Alderney in the 60s (which is the next best thing to returning to a convent) and died of an overdose in a nursing home in 1975.

I would presume that the overdose was a medical error, rather than a Jimi Hendrix-style act on her part.

Love that cover!
EM Delafield ('Diary of a Provincial Lady') was an ex-nun, too. According to Wikipedia, one of the nuns Superior told her, about having a surgical operaton, "your Superiors will decide whether your life is of sufficient value to the community to justify the expense. If it is not, you will either get better without the operation or die. In either case you will be doing the will of God and nothing else matters." She fictionalised some of these experiences in 'Consequences', which Persephone have reprinted--I haven't read this yet, but intend to. One day!

Monican Baldwin wrote two other books, 'The Called and the Chosen' (a novel) and 'Goose in the Jungle', which is a second installment of her memoirs and picks up about 10 years after 'I Leap Over the Wall' leaves off.

She never married (as far as I can find out) - I think that her rather unusual way of looking at life might have precluded that. She is one of my favourite authors - I stumbled upon 'The Called and the Chosen' in a library clearance bin at age 14 and have loved her work ever since.

All 3 of her books are out of print but sometimes you can pick them up 2nd hand - I've spotted them on several 2nd hand bookshop shelves in the religious section.

Since reading "I Jumped over a Wall" I began poking about trying to find out how she faired later in life. Here is a newsletter which gives the most thorough details of Monica Baldwin's life that I have been able to find. It is under the article "THE SEARCH FOR MONICA BALDWIN":
http://www.stourporttown.co.uk/cs_NEWSLETTERapril2010.pdf

I also found the portrait of her in the National Portrait Gallery (UK) by Madame Yevonde, a well-known, society photographer: http://www.npg.org.uk/collections/search/portrait.php?mkey=mw143201

She walked to the beat of a different drummer.

Timken said...
This comment has been removed by the author.
10:07 pm

Matchless theme, it is interesting to me :)

Why ask if this former nun and author ever married? That obviously was not why she left the order...and why is it assumed that one has to marry? Maybe she was happy being single and with God, or maybe she never met the right man or maybe she had her heart broken. In any event, by writing three memorable books she has left a lasting and valuable legacy that has nothing to do with being married. And one must admire the strength of someone who lived out her life on her own, without her community.

Monica Baldwins' description of her tiny 'cottage in the clouds'hideaway in Lamorna Cove in Cornwall is magical reading. She didn't have a happy life there according to a resident and soon left.
Have been unable to find it on Google Earth???

Monica was married but I don't know who was her husband. She used to visit a bookshop in Plymouth in the1960s, and the assistant told me she had married.

Thanks Jan - I'd always wondered if she got married in the end. The Wkipedia entry on her isn't terribly informative.

I bought and read the very book pictured above in London, where I was at school, in 1962. I was living in London and attending school at a Convent at Cavendish Square, Convent of the Holy Child Jesus. No longer there. I was fascinated by Monica Baldwin's account. We were all thinking of joining a convent and becoming nuns back then. But even though I returned to Buenos Aires, Argentina, my home since 1965, I have always been fascinated by this type of book and knowing how a nun coped. I also have her other book: The Called and The Chosen. I should re-read them. Finding this article prompts me to dive into my library and look for my old copies for a good read. Glad to know that she married. I, not long ago, learned that one of the nuns at Cavendish Square had left the Convent for secular life. Interesting. Thank you so much for posting this!!! Am a big fan of hers!

She was most probably a lesbian shame. Never came out. Never could. Some nuns were and still are closeted lesbians. She probably decided she had no sin. Or maybe she was bisexual but too old for sex. Lovely picture of her, lovely lady. I wonder how she got her book published? Lots of writers lived in some sort of mystery further on. Lots of scandals of the catholic church still need to be told, and lots have been told. Still, sometimes a life in a cloister sounds blissful... like a retreat... as far as their vegetable gardens go and loads of books to read... or do they still only read the stupid bible. I read this book long ago, but forgot it in totality, except the marvelous title. Interesting the Sourport on Severne's account of her later life. Long live lady Monica.
https://dawnandstarwind.wordpress.com/