Until I found this novel in the cavernous basement of Camilla's Bookshop in Eastbourne, I had never heard of David Karp. I can't remember why One caught my eye, but as soon as I read the blurb on the inside front cover, I was intrigued:

'The publishers have bracketed this novel with Darkness at Noon, Nineteen Eighty-Four and Brave New World, which I at first thought presumptuous; but now, after reading it, I am inclined to agree.' - Cyril Connolly 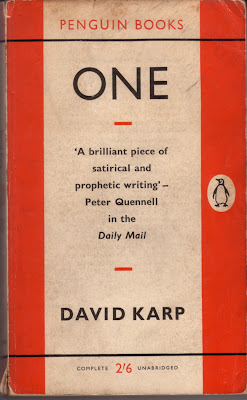 The rather worn copy on the shelf was priced £1, so I decided to trust Cyril Connolly and take a chance. I had reservations. If David Karp was that good, then why had I never come across his name in nearly twenty years of bookselling? I added One to my pile of unread books, only half expecting to ever get round to reading it.

I have just finished reading One and although I wouldn't rate it as highly as Nineteen Eighty-Four, I was surprised at how good it was.

I think it would be safe to assume that Karp had read Orwell's novel and was heavily influenced by it, as certain scenes in the book are strongly reminiscent of Winston Smith's encounters with O'Brien. If that it is the case, it doesn't diminish Karp's narrative. However, if Karp hadn't read Nineteen Eighty-Four, then it makes One even more remarkable.

To give you an idea of the novel, here is a brief extract:

'Do you know how long you must stay here now?'

'Only until you rid yourself of your heresies'

Never. Never. I can never do it.

'You will or you will die here.'

Then let me die soon.

'You will die when you must. But not for a long time.'

I will die sooner.

'You will not. You will live out your life.'

I can't do what you ask.

'You must. Who told you you were brighter than your friends?'

My father, my mother, my brother, my teachers, everyone.

No they were right. I could see that.

'They used the wrong measure of intelligence.'

They didn't. They used the correct measure.

'An intelligent man is a happy man, is he not?'

No, he is not. My father was intelligent, but he was not happy.

'Your father was not intelligent. The aim of life is happiness. Without happiness a life is without meaning.'

The aim of life is reason. Without reason life is without meaning.

'Would you rather be happy than rational?'

A lunatic can be happy without being rational. You are all lunatics. The moon will change its phase and your madness will pass as happiness will pass. The dark side of the moon is coming and with it your unhappiness.

David Karp was born in New York City in 1922. In 1942 he joined the US Army and served in the Far East until 1946, when he left to continue his education. Karp wrote six novels in his 30s, but abandoned books for a screenwriting career, writiing scripts for series including The Untouchables. Karp's work in television was very successful and he won two Emmys.

Other than this brief outline, and a short obituary published in the NY Times after his death in 1999, there is very little information on the internet about David Karp. I find this baffling. 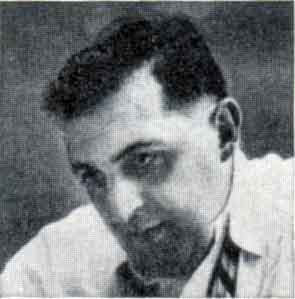 One is a very accomplished work of dystopian fiction and however derivative it may (or may not) be, it is far superior to many novels that are currently in print. Secondhand copies aren't difficult to get hold of, but I would love to see this reissued by Penguin, in their Modern Classics series.
Posted by Steerforth at 5:44 pm

Good extract. Never heard of him. What else did her write? Most of my time I spend crossing writer/books/films off my list. Here is one I want to add.
Thanks
OF

I read the novel years ago and I still have my copy and I agree totally. Nineteen Eighty-Four gets all the praise and because it is such a great work - despite the debt it owes to Zamyatin's We - people think it's the only dystopian novel ever written. No, I'm a great fan of One. It's been a while since I reread it. I think I might just dig that copy out and add it to my reading pile.

I'm glad to hear you're a fan Jim and I now feel vindicated. I wonder why so few people have heard of 'One'? I think it's superior to Philip K Dick's 'Man in the High Castle' (which I really enjoyed) and I'm sure that a new generation of readers would respond to it.

I, too, have never come across him. Yet another under-rated author.

Are you a Ford Madox Ford fan, Steerforth?

Indeed I am, although I've only read 'The Good Soldier'.

A most intelligent financial investment for £1 Steerforth.

Perhaps like records, it is time to start re-releasing forgotten classics. Not that I can ever advocate a cover version obviously.

unfortunately i cannot find this book in any bookstore

do you happen to have any suggestions as to where i can obtain a copy?

it is indeed sad that it is out of print

They're selling quite a few copies at good prices.

Thank you for this. I edit readme.cc, an EU-funded virtual library, which is aiming to assemble a comprehensive collection of reviews of published books. One of my tasks is to go through the reviews and add author details to each review. A user recently uploaded a review of One and this was the only site that I could find referring to Karp. I was beginning to wonder if he'd been made up...

I know what you mean. It's odd that there's so little information available about Karp on the internet, particularly as he was a successful writer for television and won awards.