Today I went with my wonderful children's bookseller to sell some William Nicholson books at a local school where he had been asked to talk about writing to a hundred 12-13 year-olds. We were warned in advance that the school was in an area that wasn't very 'bookish' and when we optimistically arrived with 20 copies of each of his five novels for children, but I soon realised that there was no point in unpacking most of the boxes.

The talk took place in the school gym and it had that smell - the odour of sawdust, sweat and stale polish. We set up our stall on a table at the back and watched nervously as the children filed noisily into the hall. A teacher tried to silence the din of chattering children and scraping chairs, but the noise continued until the head teacher arrived and did what must have been her scary look - a disapproving frown which implied that names would be taken and punishments allotted to the guilty parties. The noise diminished until the hall was almost silent. 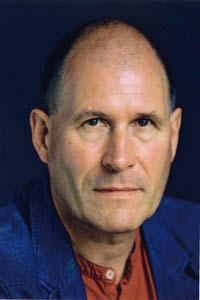 'We are very lucky to have a writer...' the head teacher paused. She had no idea who she was introducing. William Nicholson smiled and told her who he was. She continued and I could tell that the words writer and author were not going to impress this audience. They shuffled in their seats, spoke in loud whispers and I began to worry, but William Nicholson knew exactly what to do.

First he explained that he was a little jet-lagged as he had just flown back from Hollywood where he was negotiating a film deal. Yes, he wrote children's books, but he also wrote screenplays for films. Had anyone seen Gladiator? From that moment there was a tangible change in the audience and apart from a small core of dysfunctional boys at the back, he had the children in the palm of his hand. They listened.

At the end of the talk we only sold 10 books and several people apologised to us. However, I'm a great believer in the little acorns...mighty oaks approach to life. 80% of the pupils were interested in what Nicholson had to say and perhaps even a few of them will remember this day for the rest of their lives.
Posted by Steerforth at 7:15 pm

I thought Society of Others was wonderful. Great to hear he's out there speaking to young people that might actually enjoy it but possibly wouldn't have come into contact with his writing otherwise.