My fellow booksellers Crockatt and Powell recently published an excellent post about self-publishing, the gist of which was don't do it. I couldn't agree more. There are some instances where a book that would be of no interest to a mainstream publisher can find a successful niche market. Many local history books thrive without the support of a proper publisher and end up selling more than the Booker Prize shortlist. However, when it comes to fiction, poetry or autobiography, you can forget it.

I have lost count of the number of times that I've been told that 'there's someone downstairs who wants to see the manager' only to find myself confronted with someone waving a volume that looks as if it was printed in Albania, circa 1975.

When I first started in bookselling I used to take every self-published book I was shown because I wanted to support local authors, but when it came to weeding-out the unsold books from sections I gradually realised that self-published fiction and poetry never sold, unless the author was able to badger their friends and family into buying a copy. Sometimes this added-up to a loss of several thousand pounds a year. The books were always sold on a sale or return basis, but when it came to sending the unsold copy back to the author and getting credit, they were usually quite elusive, so gradually I became hardened by my experiences and learned to say no.

I always try to remain open-minded about self-published books. Every now and then I see one which is genuinely good and deserves to be supported, but nine times out of ten they are rubbish and I find that the author's ego is inversely proportional to their talent. Quite often I have self-published authors who march into my shop and announced that they've come to arrange a signing session.

I'm also astounded by the number of people who publish a book without doing any research into how the book trade works. They present books without barcodes, have no distributor and haven't arranged any publicity and yet they still manage to look wounded or incredulous when I am less than enthusiastic.

During the last few years I have had to tactfully deal with the following self-published books:

I realise that I probably sound a little lacking in compassion, but it's a reaction to the arrogance and/or self-delusion of the authors. Show me a good self-published book and I'll support it all the way: 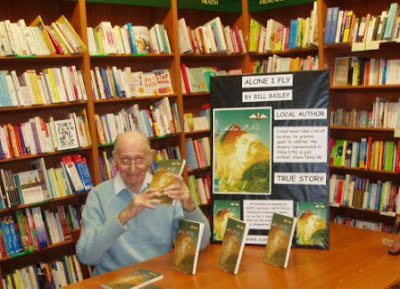 Here's the author, whose son-in-law presented me with a self-published book that had a good story that was well told. I gave it pride of place in the front of the shop.

Publishers aren't infallible and occasionally a really good book slips through the net, for example Jill Paton Walsh's Knowledge of Angels. However, on the whole, if a book is really good it will eventually get the recognition it deserves. JK Rowling was a struggling author who had to cope with several rejections, but someone eventually spotted her talent. Self-publishing offers an opportunity to jump the queue, but it's an illusory one because booksellers rarely take a self-published book seriously.

Posted by Steerforth at 6:03 pm

Not all self-published books are poorly produced. I recently attended a book launch of a friend, Sade Adeniran. She's been down the traditional publishing route with no joy. She decided to go it alone, not because she has an ego the size of Ukraine, but because she has a story to tell and it's a great story. Even though she's a friend and I may be slightly biased, judging from the feedback and the amount of books she sold on the night, I know others agree with my assessment. Even the likes of Scott Pack reckon she's worth a good look. Check out her website www.ImagineThisTheNovel.com.

I agree. Some self-published books are very good and deserve to succeed. I'm naturally inclined to support the underdog and if an author approaches me with a self-published book that is well-produced and they've arranged some local marketing, then I'm right behind them.

I thought of your post when I saw this today. These two authors originally published a children's novel, and now they've just been picked up by J.K. Rowling's publisher. They're calling it the next Harry Potter.

Yes, there's quite a big buzz going around the book trade about this novel. I shall make sure I buy a first edition!