I will shortly be watching The People's Quiz, a lamentable programme that professes to find the cleverest people in Britain but is in fact a general knowledge contest with moronically easy questions like 'In what country do they eat sushi?' The worst thing is the look of pained concentration on the contestants' faces. The second worst is the exultant applause that they receive for knowing something that anyone who hasn't been abducted and kept in a cellar for twenty years should know as a matter of course. Are we becoming more stupid?

As if in answer to this question, I found a book from 1972 called the Top of the Form Quiz Book, based on a contest for schoolchildren between the ages of 14-16. Even a cursory glance confirmed that the questions were much harder than today's quiz show for adults. They wouldn't just ask which king had six wives, but expect the contestant to list them in chronological order. 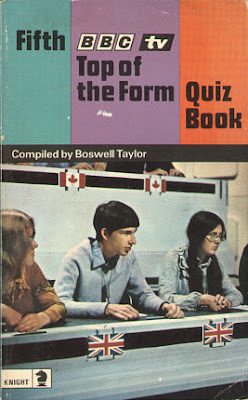 So there we have it - conclusive evidence that we are more ignorant than we were in 1972. But is it true? I think that the answer is more a reflection on the programme making today, rather than the knowledge or ignorance of the general public. The People's Quiz is broadcast in the prime time pre-Doctor Who slot on Saturday evening, with the promise of top twenty ratings. I suspect that the BBC want an inclusive programme that makes the ordinary viewer feel clever. If they had a proper quiz show with genuinely tough questions, many viewers might feel demoralised and turn over. And although the BBC isn't a commercial station, its remit is justified by viewing figures.

The multi-channel age has completely changed television in Britain. Programme makers are usually too timid to experiment with challenging formats that demand concentration and the traditional 13-part serial has been replaced by attention-deficit-friendly two-parters. I'm not sure why this is the case. In America there have been a number of series that have bucked the trend and dared to present an innovative story spanning a 26-episode arc. They have a post-modern Tarantinoesque narrative structure and are packed full of obscure references that would require a Classics degree to deconstruct them.

But the ratings are nearly always good.

Perhaps it isn't the public who have dumbed down, but the programme makers, afraid of alienating viewers with anything challenging or innovative. They're wrong. The public aren't as stupid as they look.
Posted by Steerforth at 5:11 pm