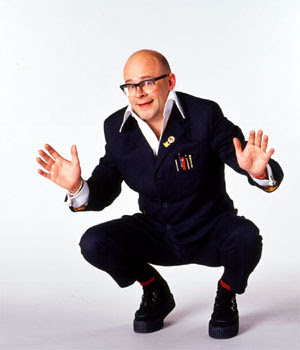 One wet and windy afternoon in Clapham, the comedian Harry Hill popped into our staff room to sign copies of his latest book. I was impressed by how swiftly he worked his way through the pile, but he did have the advantage of possessing a short name. 'Well that was quick.' I said, thanking him. 'It's a good job you're not Greek.'

'Well...if your name was Ariana Stasinopolous...' I started to explain, wishing that I hadn't broken the golden rule, which states that you shouldn't try and be funny when you meet a professional comedian.

'Oh I see.' He replied politely, but unsmilingly. 'Yes, the long names.'

It was tumbleweed time.

Six months later I watched the Harry Hill show. As the opening credits finished, he bounded onto the stage and began his opening monologue. 'Hmmm? Hmmm? Book signings! Imagine what they must be like if you're Greek. Hmmm? I heard that Ariana Stasinopolous did a book signing. She only did 15 books but she was there all day!' The audience roared with laughter at my joke which, now I'm retelling it, isn't very funny.
Posted by Steerforth at 6:58 pm

Lol! Well, at least it didn't happen to you what happen to an acquaintance of mine: he is a poet and he sent some of his poems to this now famous Portuguese writer and poem (one of the big sensations of the moment) only to meet with a silence from him. Two years after he finds out that this poet has used his poems on his new book! For some reason I decided never to read this new sensation!

It would be funny if you bought all the seats in the house one night and sat alone in the audience. After that joke you could tut loudly and walk out shaking your head in disapproval.

In fairness to Mr Hill, I expect he forgot my joke within seconds and it sank down into the murky depths of his subconscious, emerging as an original thought six months later.