Last night I went to my first opera. It was a spur of the moment thing, prompted by a glowing review in the Sunday Times of Richard Jones' award-winning production of Shostakovich's opera 'Lady MacBeth of Mtsensk District'. The review mentioned that there were only two performances left before the end of its run and I was suddenly seized by the irrational fear that I might die without ever seeing an opera, even though I am relatively young and healthy. I logged onto the Royal Opera House's web site and booked a ticket for last night.

I was not a complete stranger to Shostakovich. I first discovered his music when I was 17 and have been a keen fan ever since, but I have always had a problem with opera. In the 19th century some argued that opera was the highest art form, containing a sythesis of the musical, visual and dramatic arts, but as far as I was concerned it was a lot of fat Italians singing in wobbly voices, pretending that they were lovestruck teenagers. If I was going to see an opera, I was determined that it would be a modern one.

To give a brief background to Lady Macbeth, Shostakovich wrote it when he was 26 and it proved to be such a success that there were three productions running concurrently in Moscow. Then, one night in 1936, Stalin and his cronies attended. Stalin hated the savage satirical wit and seedy decadence of the plot and stormed out before the last act. A few days later an article appeared in Pravda entitled 'Muddle Instead of Music' and the opera was withdrawn from public performance. Shostakovich spent several months waiting for a knock on the door from the secret police, but luckily he survived.

I arrived at the Royal Opera House feeling slightly anxious about the prospect of sitting through three and a half hours of Russian opera, but I needn't have worried. From the very first moment I was gripped. Seventy years on, the music still had the power to shock and I was bowled over by the fantastic performances and beautiful stage design. I always imagined that there would be a stuffy atmosphere at an opera, but the audience often roared with laughter at the outrageous, bawdy humour in the libretto. I'm so glad that I overcame my prejudices and went to the opera. I can now see what all the fuss is about. 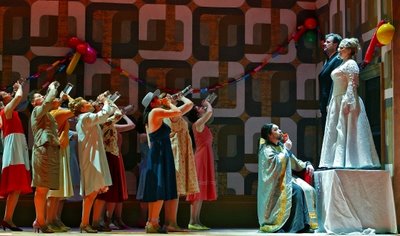 That first paragraph joke was hillarious! I've never been to an opera. This post made me curious and I'll pay more attention to when there's a next one being held here.