Mr and Mrs Clark and Percy 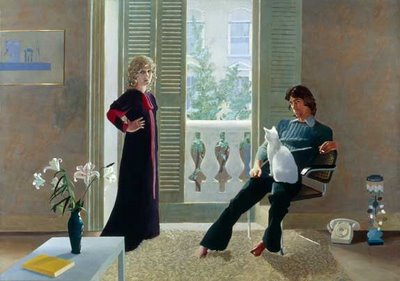 When I was a teenager I had an obsession with David Hockney's painting Mr and Mrs Clark and Percy. I can't remember why I liked it so much, as it no longer has the same appeal. Perhaps the picture's realism made it more attractive to my untrained mind, but I also wonder if I felt attracted to the subjects, Celia and Ossie Clark. At the time I had no idea who they were, I just saw a successful, young couple who seemed stylish and confident. Adding a cat (whose real name was Blanche) on Ossie Clark's lap was a masterstroke. I liked the way that 'Percy' showed no interest in the artist and prefered to look out of the window.

Some years later I picked up a newspaper and read that a fashion designer called Ossie Clark had been stabbed to death by his gay lover. I almost didn't bother reading the full article until I realised that this was the Mr Clark depicted in Hockney's famous painting. I had often wondered who Mr and Mrs Clark were and discovered that they were both celebrated fashion designers in the 1960s, on a par with Mary Quant. Married in 1969, the Clarks seemed the epitome of success but their marriage only lasted four years and in 1983, Ossie Clark was bankrupt. The story of how Ossie Clark's life went off the rails was long and convoluted and I won't relate it here, but it was sobering to realise what happened to the confident young man in the painting with the insoucient expression on his face.

Mr and Mrs Clark and Percy was voted one of the top ten favourite British paintings in a poll several years ago and whilst that doesn't mean it has any artistic merit, it is interesting that this picture has captured the imagination of so many people. I expect that the National Portrait Gallery's new Hockney retrospective will be be very popular.

Ossie Clark may no longer be with us, but 36 years after the portrait was painted Mrs Clark is alive and well. Last week Celia Birtwell appeared with Hockney for a photo session and even managed to wear the same dress... 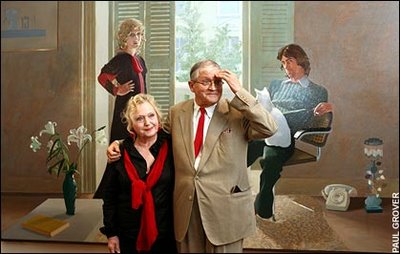 I, too, liked this painting a great deal when I was young, but feel pretty nonplussed about it nowadays.

Isn't it supposed to be formally structured as an ironic comment on The Arnolfini Wedding by Van Eyk - or was that one of my hangover mornings in Hist Of Art?

I didn't know that, but it certainly makes sense. Thanks for that and good luck with the shop!

I too insanely remember this painting in an coffee table art book as a kid, I think I was captivated by the subjects, their faces and the juxpoition of the indifferent feline... Years later seeing a television special on the artist I excitedly "googled" the information and was off to purchase a print of this beloved image I used to remember as my personal favorite in that huge book....then I changed my mind as I became more disenchanted with staring at the image again for the first time in over 30 years, Im not sure why....I guess time can have that effect....

I loved the painting from the start - when I was a kid living in England - and 20 years later I still love it. Knowing what happened to the subjects just makes the painting that much more powerful.