On Monday morning I arrived at work and found a copy of the News of the World in the staff room! I have just employed several new Sunday people and they all seemed intelligent and well-adjusted, but there was obviously a cuckoo in the nest.

I trawled through the employee handbook to see whether there were legal grounds for sacking someone on the basis of what newspaper they read, but it was unclear what I should do. Then I noticed that there had been a free DVD of a George A Romero film and it all made sense. Johnny. I breathed a sigh of relief, sat down and spent the next hour reading the newspaper, where I found this particularly depressing article... 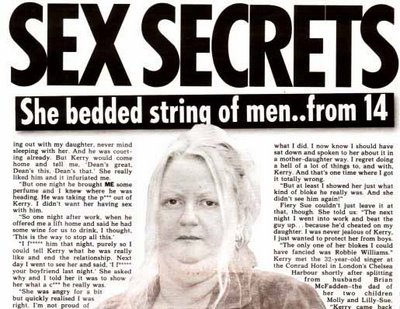 Interviewed by a News of the World journalist, Kerry Katona's mother Sue gives a life-affirming account of the mother-daughter relationship. After describing how Kerry lost her virginity at 14, Sue recounts an episode that took place three years later when Kerry was sleeping with Sue's employer.

'The bloke was 25, a cheeky Scouser called Dean, and I was absolutely furious. I knew he was a bastard and I didn't want a man like that going with my daughter, never mind sleeping with her. And he was courting someone.'

Fair enough, but what was Sue's novel solution to the problem?

'One night after work...he offered me a lift home and said he has some wine for us to drink. I f***** him that night, purely so I could tell Kerry what he was really like and end the relationship. Next day I went to see her and said that I'd f***** your boyfriend last night. She asked why and I told her it was to show her what a total c*** he was.'

The next day, Sue went into work and 'beat the guy up...because he'd cheated on my daughter.'

Yes, with YOU Sue!

Sue then goes on to relate an incident when Kerry, still a schoolgirl, asked how mother about oral sex. 'I told her to get a carrot out of the fridge and I showed her. It may not be conventional , but that's the way I did it.'

'I've been out with some bad men and Kerry saw things as a kid she shouldn't have. And when I lived with a woman called Tina she got bullied at school because her mum was a lesbian. I beat up the teacher because he did nothing about it. Tina and I finally split because she beat me up - then I knifed her and she needed 17 stitches.'

Later, 'fame-hungry' Kerry sneaked off to have topless photos taken. As she was still legally underage this action prompted a call from social services. A social worker turned up at the Katona household and his gay persona prompted Sue to comment 'You wouldn't have a problem if she had a dick, would you!'

Next to this article there is a short interview with Sue's sister Josie who claims that Kerry and Sue snort coke together.

By this point I felt totally depressed by what I'd read. I'd like to think that the whole thing was a tabloid fabrication, but it's horribly plausible. There is an underclass in this country that seem to inhabit a different universe and I don't know why this is. Once we would have cited poverty as the cause, but it is more complicated than that.

My mother grew up in relative poverty: a family of six occupying the upstairs floor of a small, semi-detached house, three sisters sharing a bed and the parents sleeping in a large cupboard. However, like many people in her class, her family had a strong moral framework and would have rather starved to death than take something that didn't belong to them.

How have people like Sue Katona come to exist? Why have things changed? Is it the collapse of organised religion, the breakdown of local communities, the influence of American film and television, the benefits culture, the consumer culture, post-modernism or all of these that have created a climate in which Kerry Katona is now described as a 'role model'?

Posted by Steerforth at 8:16 pm

That's some story... Moral consciousness at its primary stage...

Ok, call me crazy but I just remembered and found something that is interesting for all that the comprehension of morality is worth.

I posted a comment on this book on my blog (http://goncaloveiga.blogspot.com/2006/09/twenty-cases-suggestive-of.html) from which I encountered the most interesting hypothesis on the deviation from morality. I am aware that phenomena are multi-prompted and it is not wise to reduce an explanation to one argument. Therefore, in order to fully understand how this woman, Sue, thinks it would be necessary to study her childhood and early relationships (parents, friends, colleagues) along her early memories, dreams, fantasies and phantasies and ghosts.

Having all these in account, I cannot resist to quote this book, mentioned in Ian Stevenon's Twenty Cases Suggestive of Reencarnation(1966/1980), called A Critical History of the Doctrine of a Future Life, published in 1860, by a learned Unitarian clergyman, the Rev. W. R. Alger. There the author wrote:

"The theory of the transmigration of souls* is marvellously adapted to explain the seeming chaos of moral inequality, injustice, and manifold even presented in the world of human life" (pag.475)

*check Plato's Fedon for the concept

So, according to this author, someone who would have previously lived in a tribe for all her/his life (for instance on the Amazon), where promiscuity was normal and even morality accepted and promoted, would carry within her/himself these values on to the next life. If this next life would happen to be lived in a different globe region or, simplier, at a society with another type of instituted morality conduct, the individual would always have these past impressions at his (paralife-unconscious - this is my term, it doesn't "exist" academically, yet...) unconscious. And, lest society moulds, in a perfect fashion, the individual to act accordingly to its rules, the individual will always be driven by his unconscious impressions and pulsions.

Then again, it should be interesting to study individuals like Sue...

Interesting idea. I'm not sure about the concept of transmigration of the souls, but it could be argued that our DNA (about which we still have a lot to learn) does the same thing, transmitting personality types across generations, making free will a spurious concept.

This is why some people want to create a national DNA database, not just to identify criminals but also to isolate any individuals with a genetic predisposition towards violence. It's all heading towards a scary 'Brave New World' scenario.

Having looked again at what I wrote, I didn't make my point very well. I'm not sure if Sue Katona is an aberration. It has been argued that the moral behaviour of the average educated person is at odds with the history of human nature, which is governed by darker impulses (Lyall Watson's excellent book 'Dark Nature' explores this theme) and that neurosis is the product of a clash between nature and nuture. To some extent I agree.

What depresses me about Sue Katona is not so much about her - every age has its Sue Katona's - but the degree to which society now tolerates (or is indifferent towards) behaviour like hers and values self-gratification over self-sacrifice.