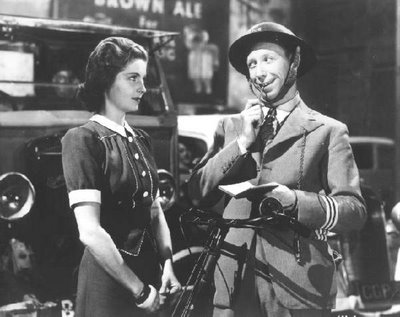 I have just discovered this little-known fact about George Formby ( for non-British readers, George Formby was a famous, ukelele-playing singer and film star during the 1930s and 40s, whose greatest fan was Stalin). In 1946 Formby flew to South Africa to begin a tour and was warned by Daniel Malan, the head of the National Party, that it would be unwise to perform to 'coloured' audiences.

Formby ignored the warning and outraged the founders of Apartheid by performing 20 shows to black audiences without charging a fee. To add insult to injury, he kissed a black child on stage. The next day a group of National Party members visited Formby and his wife at their hotel, only to have the door slammed in their faces. Daniel Malan phoned Beryl Formby and began to complain, but she interupted him saying 'Oh piss off, you horrible little man.'

This anecdote came as something of a surprise as I'd always associated Formby with the Mr Wu songs and the joke about 'If you've got a chink in your window, you'll have another one at your door'. However, it is clear that Formby and his wife are unsung heroes of the anti-Apartheid movement and deserve some credit for their stance, unlike 'Queen', who played Sun City 30 years later.
Posted by Steerforth at 10:55 pm