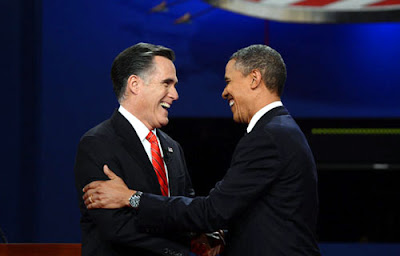 One thing I've noticed about Mitt Romney and Barrack Obama during the last two months has been their desperate attempts to seem like 'regular guys'. Both have been dropping their 'gs' and talkin' about folks and bucks, rather than people and dollars.

Obama has been thinkin' and hopin', whilst Romney has complained about folks bein'  tired of payin' nearly four bucks for a gallon of gas.

What is it that makes a multi-millionaire and an aloof academic start adopting the speech patterns of a truck driver? Is it a cultural meme in the American psyche that associates a patrician accent with ancient forces of oppression? It didn't seem to do FDR any harm:


But could any American politician get away with an accent like Roosevelt's today? I doubt it. One of the last politicians to speak with a distinct New England accent - Edward Kennedy - has been mercilessly lampooned through the figure of Mayor Quimby in the Simpsons.

In England, perhaps the most powerful linguistic meme goes back to 1066, when the William of Normandy defeated King Harold and French became the language of the ruling class for nearly three centuries, whilst English went underground.

I suspect that similar forces have been at work in the Presidential election, with both candidates trying to out-normal each other by adopting the speech patterns of a mid-western everyman.

I was particularly impressed by Mitt Romney, who was a genuinely charismatic figure. Unlike Ronald Reagan, who died his hair black, Romney used the 'Just For Men' approach, carefully allowing a little grey at the sideburns to give the illusion of a natural colour. It was a useful metaphor for Romney's policies which seemed to change hue a little too often.

I'd like to think that Romney was rumbled for having no coherent policies, but I think the result was ultimately more about the changing demographic make-up of America. Romney was a 1984 candidate. The USA has changed and cheesy, handsome WASPs can no longer rely on empty rhetoric and a bottomless pit of corporate donors to guarantee victory.

I can only assume that the Republicans will now do a lot of soul-searching and, if they have any sense, find a Hispanic candidate to upset the apple cart in 2016. Instead of folks and talkin', the meme will look further south.

In the meantime, I was relieved to see that in Barack Obama's victory speech, he was once again hoping. So am I. Good luck, Mr President.
Posted by Steerforth at 8:35 pm

Wasn't Tony Blair notorious for (among other things) a kind of put-on "Estuary" accent?

His accent was a bit of a hybrid of posh Newcastle, RP and Estuary glottal stops (but minus the hideous nasal twang).

Now that I've thought about the subject a little more, some Labour leaders used to do the same thing as American presidential candidates. Harold Wilson definitely sounded more northern when he addressed the TUC.

I also hear lots of middle class men use glottal stops and use "mate" when they want to seem more approachable.

Sadly, when I heard my voice played back on a radio interview, I sounded like someone from the 1940s.

I seem to remember reading that Wilson's pipe was also a bit of an affectation.

Nothing wrong with sounding like a refugee from the 1940s - at least people can tell what you're saying.

Whar happened to the huntin', shootin' and fishin' types? They certainly weren't truck (or lorry) drivers.

Ah, very good point. Now I did read something about this years ago - I wish I could remember it properly - but the gist was that class accents are a relatively modern phenomenon and that a 16th century London aristocrat would have sounded a bit like Del Boy (experts have arrived at this conclusion because some contemporary documents were spelled more phonetically).

But the point about Romney and Obama is that they consciously changed their accents just for the duration of the campaign.

I shouldn't have said 'truck driver', as millions of people from all sorts of backgrounds in Britan and the US say 'in' rather than 'ing'.