The Art of Seeing


I've been feeling a little stale recently, so yesterday morning I set off on a walk through Lewes, trying to regain the sense of novelty and wonder I felt when I first moved here, 11 years ago. I had no idea where I was going or how long it would take, but knew that my journey should include some unfamiliar roads.

In a town the size of Lewes, it could be a challenge to find a different route. But like the human circulatory system, if you unravelled the streets and twittens of Lewes, they would probably extend for hundreds of miles. Everywhere you go in the town, there are narrow passageways that have defied the best attempts of Google to comprehensively map the local area. It is a medieval town that was built for people, not cars.

Here, in no particular order, are some of the things that caught my eye: 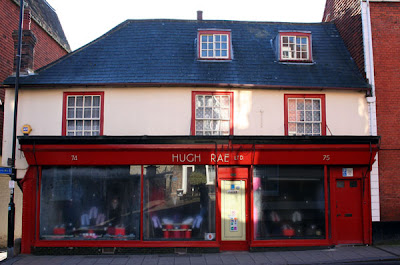 However, the frontage belies the fact that the actual building is more 1330s than 1930s: 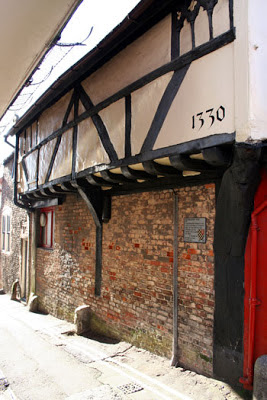 In 20 years' time, I shall be coming to Hugh Rae for my Harris tweed suits, if they're still around. Sadly, with the sartorial standards of the older generation in rapid decline (only yesterday I saw a man in his 70s wearing a fleece and trainers) I sometimes wonder if the Hugh Raes of this world will survive.

Perhaps the Government should offer additional pension credits for the wearing of cravats and ties. 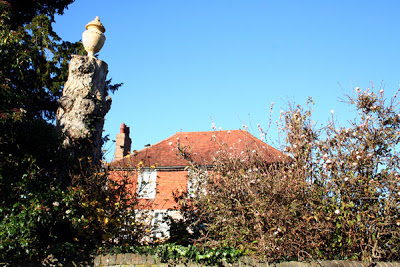 During the walk, I kept reminding myself to look up as well as ahead and was rewarded with the sight of an urn placed on a 15-foot-high tree stump. Maybe it's someone's ashes. 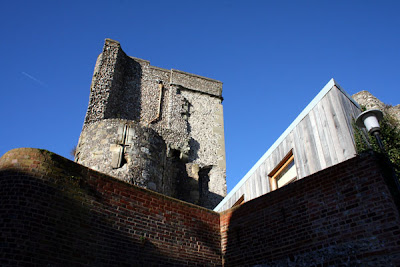 This unusual view, taken at the end of Castle Ditch Lane, shows the town's oldest building (circa 1069), next to one of its newest. 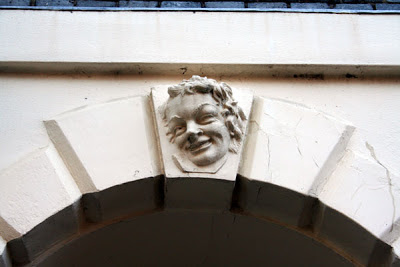 I must have walked past Gideon Mantell's house hundreds of times without noticing this curious keystone. 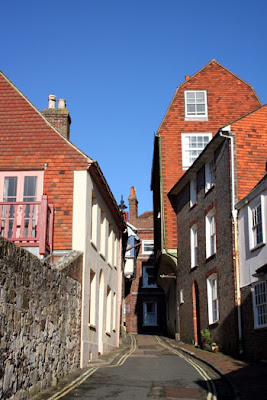 Another view of the 1330 building, as seen from St Martin's Lane. This lane takes you down a steep hill to an area called Southover: 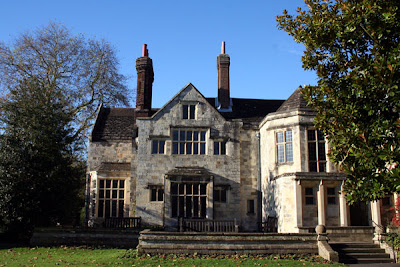 This is Southover Grange, which was built in the 16th century out of the stones from the recently-dissolved Lewes Priory of St Pancras. The diarist John Evelyn spent most of his childhood here. Today it's owned by the local council, who maintain one of the most beautiful public gardens I've come across.

In the spring, a small cafe opens and the gardens suddenly fill with young families and teenagers on their way home from school. I made this short film about Southover Grange a couple of years ago. 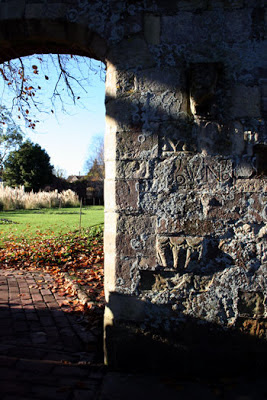 The gardens used to have a tree that was on the verge of collapsing and an area with a sheer drop into a fast-flowing watercourse. These were both a huge hit with the local children, but the local health and safety spoilsports have erected some ugly, cheap wooden fencing. It's a great pity.

My son won't go there any more, now that the threat of being swept away into an subterranean network of rivers has been removed. 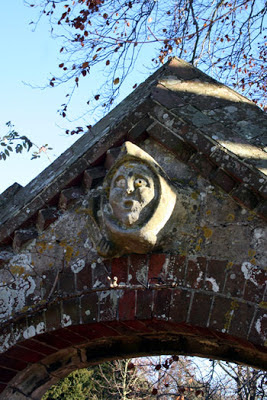 This wall betrays Southover Grange's origins.Like Gideon Mantell's house, I'd never noticed this feature before. I need to make a habit of looking up more often. 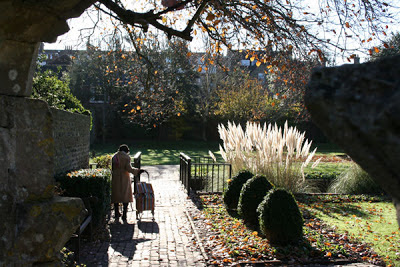 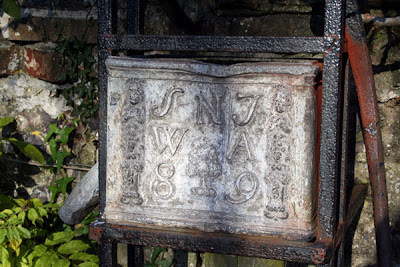 This rusted pump sits on top of a well. I've always liked 'street furniture' of this kind. 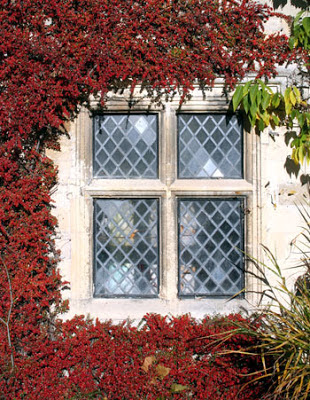 A Tudor window, where people probably film clips of fake ghosts to entertain the gullible on YouTube.

On the subject of fake ghosts, I once held a book signing session with Derek Acorah and before he arrived, I spoke to his publisher's sales rep:

"There's just one thing you need to know about Derek. He never, ever drinks anything except sparkling spring water, so just get several bottles of that and he'll be perefectly happy."

I dutifully went out and bought three bottles of Tŷ Nant, which I placed in a tasteful arrangement on the signing table. Two hours later, he arrived: "Hello Derek. Nice to meet you. Before you begin, can I get you anything to drink?"

"Oh yeah, thanks very much Phil. I've have a coffee. White with one sugar."

We didn't have any milk. Perhaps he was psychic after all. 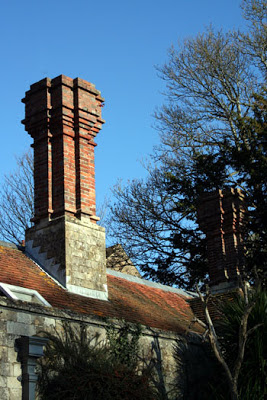 At Southover Grange, even the chimneys are interesting. 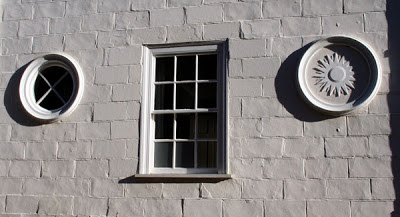 This is in Keere Street, which connects Southover Grange with the High Street, via a steep climb that finishes at the famous 15th Century Bookshop. It's one of Lewes's most attractive streets and if you're lucky, you might catch a glimpse of Lord Briggs working in his study. 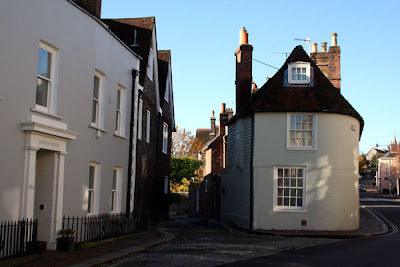 At this point, I was almost home and could have switched off, but my walk had taught me to look again at buildings that I hadn't noticed for years. The doorway below is surrounded by 'mathematical tiles': 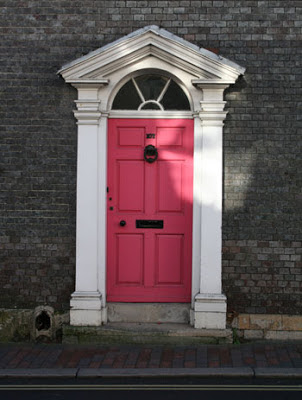 Many of us travel thousands of miles in search of novelty, but perhaps the real challenge lies in finding it on your doorstep.
Posted by Steerforth at 12:33 am

Love your posts - always interesting and thought provoking. Your final sentence Many of us travel thousands of miles in search of novelty, but perhaps the real challenge lies in finding it on your doorstep, reminded me of one of Canadian photographer Freeman Patterson's workshops held at his New Brunswick property quite a few years ago. The students were instructed to shoot an entire roll of film on a single subject. Freeman's incredible talent is in sharing (and teaching) what he sees ... often right under his very nose. http://www.freemanpatterson.com/books.htm
Thanks for reminding me : )

It certainly is a challenge, one I'm faced with every day!
I happened to be watching one of those daytime shows...maybe Bargain Hunt (I promise it is a rare occurrence) recently; Lewes was the location. I was disappointed to note that two of the contestants were the types that are 'ten a penny' in Pontypridd. I was expecting eccentric charming old boys.

'Looking up' is good advice for the weary observer, you'll always see something new. And I wouldn't fret about a cheap wooden fence, if that's one of the few things which spoiled the views, you're very lucky to live where you do!

I enjoyed walking around Lewes with you, Steerforth. And I'm led to wonder if the Flaneur Society's 'Guidebook to Getting Lost' might serve you well?

Fabulous tour - not a Poundland or WH Smiths or Boots in sight!

I bet there's a few Hugh Rae Henries though.....

What a great tour. I do think walking is both a great energizing (as well as calorie burning) activity. And you are so right about looking up...sometimes what you see is quite amazing.

For example, on the London Road near my sister-in-law's house in Leigh-on-Sea, there's a beautiful old row of shops with a number above -- something like 1530 -- can't remember for sure -- which is the cause of much local merriment. It's the address, not the year the building was built!

There's also a lovely Tudor house built right on the edge of the road into Billericay, which looks as if it's been there for hundreds of years. The year on the upper wall is 1997 -- not a misprint -- the owner was an historical nut who spent about five years replicating the exterior of a Tudor house. And did a fine job too, right down to the crooked beams.

Take care and have a great week, xox Carol

Gill - Thanks for the link. I liked Patterson's statement "I believe our species is no more special, in nature's scheme of things, than any other, and that all life and life habitats should be treated with the same care, respect, and dignity that we, in our best moments, treat our fellow human beings.

Lucy - I think Lewes is all the better for being a bit of a mixed bag and, as Ali G would say, "keepin' it real". When towns become too 'charming' the houses prices rocket and they turn into open air museums. Lewes is still a working town, with surprisingly few tourists. That's one of the things I love about it.

Judith - I see that you're thinking of abandoning your blog. It would be a great pity if you stopped writing, as people are far more interested in what you have to say than you might think - have you considered starting a new blog? That might give you a fresh impetus.

Martin - I used to do things like this with friends when I lived in London. We'd buy Travelcards and end up in places like Perivale or Harrow. I loved it; particularly when we found ourselves in slightly threatnening pubs. I'd forgotten how much fun it was, so thanks for reminding me.

zmkc - Thanks. I've always enjoyed your posts of buildings.

Rog - I've never seen a Hugh Rae Henry entering or leaving the shop, but I think they all turn out for the Boxing Day Hunt.

Carol - Essex is a much-malingned place, isn't it, but I've discovered some wonderful old buildings there.

I can't see the point of spending so much money building a fake Tudor house. My wife's family home was a huge, genuine Tudor farmhouse and went on the market for a surprisingly low price. However, I admire their dedication and old-style homes - real or fake - are usually much nicer places to live in.

Lewes is a lovely town - I enjoyed your perambulations very much.

Wonderful - and closer to my heart than you might think.

I suupose the real challenge would be to do a post like this in a 'crap town'.

I agree that Essex often gets a bad rap. But then so do a lot of other places that people fail to appreciate. We've traveled a fair amount in Great Britain over the years and Essex and Suffolk remain two of my favourite counties. I think John Constable was on to something here!

Today is Thanksgiving in the US, and so I want to wish you a happy Thanksgiving day. One of the many things for which I am grateful are the wonderful posts (like yours) that I enjoy reading on the net.

Have a great day -- and a great weekend. Cheers!

Oh yes! That would be interesting...

There's always the opposite approach too.

Thank you for this brief but enjoyable bit of armchair travel. My current view is of 20cm of snow, so it's ever so pleasant to see parts of the world still green(ish.) Also, no architecture in Edmonton, Alberta, Canada is more than 200 years old.
Donna

Here's something up your alley. As long as you're strolling around alleys...

Carol - I hope you had a great Thanksgiving. I agree about Essex and Suffolk - they're both growing on me, but I think Sussex knocks the spots off them.

Sam - Crawley would be a real challenge, but I'm tempted to do it.

Donna - I used to envy people who had real snow, but three bad winters in a row have shown me that the novelty can wear off!

Séamus - Thanks for the link to the wonderful photos. I was particularly interested to see the ones of Rochester, as I'd just read an article about how the present-day city is really suffering as a result of the demise of Kodak.

The quality of the colour made them particularly evocative - both immediate and remote at the same time.