Walking home from school yesterday, I watched my two sons skipping ahead, earnestly discussing a computer game called Minecraft whilst jumping onto low garden walls and racing each other to the next lamp post. They could have been friends in the same class - one slightly taller than the other. When I tell people that the age gap between them is six years, they are always shocked.

My oldest son increasingly reminds me of Oskar Mazerath in The Tin Drum - a boy who consciously decides to stop growing as a rejection of the adult world that awaits him. I've no idea why my son isn't growing, but I can only hope that when puberty eventually arrives, it will empower him. 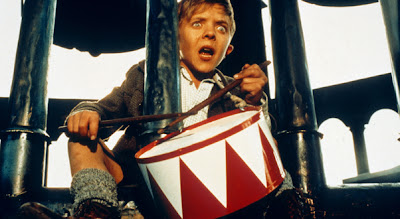 As today is my younger son's seventh birthday. I've been thinking about the Jesuit motto "Give me a child until he is seven and I will give you the man" and wondering how true it is. My life up until the age of 14 seems like a nebulous, badly-written play in which I had a largely non-speaking part. However, the moment my voice broke, I felt as if I had become a clearly-defined person.

I've no idea why a surge in testosterone should result in a new passion for Beethoven, Radio 4 and Ingmar Bergman films, but almost overnight, things that had once baffled and bored me were now utterly fascinating. I became interested in current affairs, bombarding the London embassies of various nations with requests for information about their countries. I also started avidly watching Newsnight.

Since then, my tastes have changed remarkably little. There are some things that I can no longer stomach - Mahler symphonies, Radio 4 comedies and Constable - but I still enjoy many of the things that appealed to me 30 years ago. It's odd how a one-year growth spurt can seal a person's destiny.

I hope that my older son's testicles are limbering up for a similar transformation. Some people look back on their childhood with fondness, but for me, life began at 14.
Posted by Steerforth at 10:53 pm

I predict (a limited array of reasons lead me to believe) that your eldest will have a difficult year once puberty arrives, and after that he will have a new and improved lease of life.

At fourteen, I became sullen, angry, detached and fearful. Each to their own, but sadly; nothing much has changed for.me either in 20 years.
A midlife crisis is my only hope.

Minecraft - I don't understand the appeal, but it seems a good team building game in some respects.

I'm not sure when I realized who I was. Not trying to be flip, but I'm not sure it's happened yet. Though I suppose the Fates better get a move on before I die of old age ...

14 was a major turning point in my life too, she was called Suzanne.

Me too - I learned to play the guitar, which gave me a sense of self previously lacking, not sure why. Which in turn led to my first proper girlfriend...

Radio 4 comedy is no longer funny, no mystery there. The rot set in when the Beeb got rid of my friend, the late, much lamented Jonathan James-Moore. His official title was Head of Light Entertainment, but he called himself Head of Jokes. Gave us, among many others, League of Gentlemen, The Day Today and Knowing Me, Knowing You.

Lucy - I hope that will be the case with my son. He is very immature for his age, which creates a lot of anxiety. As he gets older, this will matter less.

As far as midlife goes, it's swings and roundabouts!

Carol - Your attitude betrays the wisdom of experience. I'm always suspspicious of people who say "I am..." a certain type of person.

Martin - Ah well, there's another aspect of puberty. The best of times, the worst of times...

Mike - I've just Googled his name. They got rid of him? That's ridiculous, given the programmes he was responsible for.

I wonder why Radio 4 comedy has become so utterly awful these days?

My daughter (12) is nearly in the full rush of pubertal hormones, and the moodiness and being up for an argument at any time over anything however little is coming to the fore. Add to that, she's still angry at me and my ex for getting divorced (it's been 18 months since that all kicked off), and it's a bit difficult chez nous. I know it won't last forever though, and am trying hard to pick my battles and bolster her confidence.

I hope your son, when it happens, doesn't have too hard a time.

Annabel - I think you're right to pick your battles. In time I'm sure she'll understand and respect the decisions you've made, but I suppose she feels very insecure at the moment. Most of the children I know hate change of any sort and would rather stay on a sinking ship than move to a lifeboat (I know, it's a rubbish metaphor).

Thanks Steerforth - I often seem to get confessional in comments on your blog as your excellent posts cause me to think and reflect on my own life! Hope you don't mind being my sounding board.

Not at all - I'm always curious about other people's lives.

I always knew exactly who I was. But aged 12, I found teenage parties baffling. What was going on? Why did they turn the lights off? Still like Mahler and Constable.

Never worry about a boys height! I have four sons who came in various sizes none of which really predicted their final height - the one who seemed to be tiniest is now over 6 feet tall and didn't grow much until aged about 16.
Regarding problems other than size - it's a lifelong minefield. Be brave!

I'm still interested today in the things I developed a taste for as a boy: comics, books, toys (reacquiring ones I had as a kid), etc. Interestingly, a lot of my peers from childhood who were into drink and drugs and misbehaving, nowadays seem to spend most of their time in the pub or the bookies, or congregate in underpasses, drinking cheap wine or lager and smoking joints.

You are hilarious as usual. Maybe Mahler 3 could draw you back...?

Thomas - I agree that Mahler's 3rd is beautiful - in places, sublime. I bought the Klaus Tennstedt recording when I was 17 and became obsessed with the music. But as a symphony, I'm not sure how much substance it has compared to, say, Sibelius's 3rd, which is less than a third of the length, but seems to have the same amount of musical material in it, densely compressed, as if inside a black hole.

Having said that, the Mahler 3rd and 4th are the two that I still listen to and enjoy.

Kid - I feel the same way about children's television. For some reason, I can't reread comics as they bring back so many mixed emotions. I used to be so completely obsessed with Marvel that I didn't think of anything else, then one day I just stopped. I wish I could remember why.

Richmonde - I never went to teenage parties until I was 'of age', so I've been spared that pleasure, but my wife has vividly conveyed the horror of being stuck at someone's house at 13, surrounded by bitchy girls, knowing that she wasn't due to be collected for another two hours.