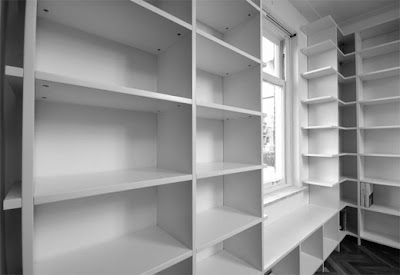 I'm still getting used to the randomness of self-employment. After years of working regular hours for a set number of days per week, it feels strange to not know what you're doing from one day to the next.

On Monday I received a text from someone that read:
"Hi Phil, I'm in the process of designing a bookshop and could use some helpful input. I think you're probably the man - what do you reckon?"

24 hours later I was wandering around a huge, deserted haberdashery shop, trying to imagine how it would work as a bookshop. I wasn't sure whether I'd be much use, but I'd forgotten how much I'd learned. Years of opening shops, ordering stock and trawling through spreadsheets of sales data had given me a good overview of the priorities.

I made a few suggestions, including moving the till point closer to the entrance, putting the children's books nearer the back and reducing the opening stock order by 80%, but I couldn't bring myself to make the most obvious recommendation. Don't do it!

According to an article published in today's Bookseller, "Four in ten shops will shut and property portfolios will reduce by 30-40% in the next five years as customers increasingly turn to online shopping over bricks and mortar, according to a report released this morning".

It's not a good time to open a shop.

I'm fairly confident that the best independent bookshops will survive if they have a good catchment area, but sadly this shop wasn't in one of those towns. Indeed, when I looked at the shabbily-dressed locals, slowly hobbling past the window, it reminded me of an episode of The Walking Dead.

Luckily the rent is very low, so the shop will only have to sell a few books a day to be profitable. Also, the owner is a very talented bookseller with several successful businesses, so he knows exactly what he's doing. But I still think that it takes a tremendous amount of courage to open a shop in today's economic climate.

According to Hugo Clark from Deloitte's, "The role of stores is changing but that does not mean they will be less important. The store of the future will be less about driving product sales and more about a holistic brand experience."

I think if my name was Hugo, I'd refrain from using phrases like 'holistic brand experience' as people will think that you're a bit of a ponce. But he's right. I think that the retail chains of the future will make most of their money online and only need a small number of stores as showcases for their 'brand'.

It all sounds a bit depressing, but with fewer chain stores around we could be about to enter a new golden age of small businesses and independent shops.

I'll come clean; I want to see Britain end up like an episode of Chigley and if the recession brings us any closer to the promised land, then I welcome the retail meltdown. Let's bring back steam, tweed, cravats and tiffin:

Posted by Steerforth at 7:46 pm

Ah yes, you get the feeling that an independent bookshop would do very nicely in Chigley. Of course, the railway, there, had already discovered the advantages of being on line.

My home town is full of zombie types. Happy to spend £4 at Greggs, or £6 on coffee and a 'fancy' panini. Spending a similar amount on a book which would last forever, provide mental stimulation and teach them something - no way. I wonder if it's a confidence thing for some because they wouldn't feel comfortable going into a book shop. I suppose that's where the celebrity autobiography comes into its own.
As for children's books, as long as they feature tv or film characters the parents recognize, they sell. I don't see that as a bad thing.
Maybe pumping out euro dance music would draw the crowds. Seems to work here anyway!

The "holistic brand experience" is surely all the things that bookshops can offer but online shopping can't. Your chum just needs to fill the space with the smell of mildew and wood polish and ask a few mad people to wonder up and down the aisles, mumbling. At the till there should be someone who is ONLY WORKING THERE UNTIL SHE FINISHES WRITING HER NOVEL, OK?

The books themselves are an unnecessary distraction.

Is he planning on having a café in the shop? That can bring in extra custom especially if the cakes are really good.

Lucewoman - My own mother used to feel uncomfortable visiting me when I worked at Waterstone's, as if we'd throw her out for wearing too much nylon. When I took over a shop in Crawley (which was a solid, working class town), I comletely changed the windows and front of shop, so that there were more children's books - particularly film tie-ins - and celebrity biograhies. I also added a 'Billy Bass' singing fish at the till point that children could press while they were waiting. The shop was colourful and inviting and our sales went up so much that we had regular visits from Waterstone's management! But in spite of all that, it still barely made a profit.

If I opened a bookshop I'd only do it in a town where all the men were called Hugo and the dogs were called Fenton.

Tim - Yes, you can't replicate the smell of stale urine online can you?

I always hated the people who were 'helping out' for pin money while they were doing something far more important with their lives, because this was my life.

Sarah - No he isn't, but he has a large space that could be converted into a cafe. I've worked in a shop with a cafe and found it a mixed blessing - I seemed to spend a lot of my time cleaning the loo!

The more people tell me the future is online shopping the more time I find I spend in actual shops. Internet shopping is great, delivery is a pain in the neck, I think the high street has a future - hopefully one that looks a bit different to the current version.

The Deloitte report (and similar speculations, such as Ms Portas's) seem to imagine a future where the shops/ businesses that still survive are those that offer an "experience" ie things that can't go online - coffee shops, fitness centres, creches and so on. People will still want to "go out shopping" (or at least go out) and they'll be attracted to places like that (because there's nowhere else left).

Personally, I should have thought that a bookshop fitted the bill very well: when I go anywhere I count it a failure if I don't find a bookshop to nose around (we visited Westfield in the summer and I have to say I think there's a lot of wasted space there - all those outlets selling vulgar overpriced tat, and only one tiny bookshop). It baffles me there are so many shops selling clothes - after you can get anything you need at M&S in 15 minutes then do something interesting with the rest of the day.

However, I understand most people don't think like that (people are weird aren't they?) so perhaps the answer would be to attach your bookshop to a coffee shop/ fitness centre/ museum/ whatever and catch the customers flocking there.

I never heard of Chigley before. But that's a lovely song.

I used to be in a band called Steel Bill and the Buffaloes, and we used to finish our set with a hyped up version of 'Time Flies By' - the students loved it.

Also, I saw this today - http://www.flickr.com/photos/kazjones/7011555767/ - I'm assuming it isn't you as I can't imagine you would willingly want to drive from Lewes to the glory that is Aldershot ever day....

I bet they loved it - I would have been in seventh heaven!

So, you've rumbled my secret Aldershot operation. I don't drive from Lewes, but I have a team of illegal immigrants - all between the ages of 8 to 14 - who work for 47p per hour, adding Victorian novels to my growing sales inventory. As you can see, there are no proper windows, so that no-one can see what I'm up to (although if they saw a lot of children with books, I'd say that I was running a private school).

If you promise not to grass me up, I'll cut you in on the profits.