In a Russian Mood 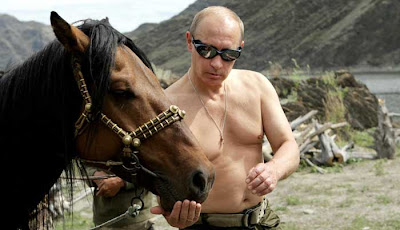 After reading about the return of Vladimir Putin, I've been in a distinctly Russian mood. I was going to listen to Shostakovich and eat borsch, but ended up getting waylaid by some Soviet disco hits from the late 1970s, including this gem:

I had no idea that disco fever spread beyond the Iron Curtain, but you'd never get bands this big in the West (with the possible exception of the Love Unlimited Orchestra). It's overmanning. No wonder the Soviet economy collapsed.

Beyond the wah-wah guitars and dodgy afros, it's a good old-fashioned gloomy Russian ballad. I can't see the Bee Gees covering this track.

It's strange to think that a whole generation have been born and reached adulthood since the collapse of the Soviet Union. The USSR, with its Mayday parades, geriatric politicians and five-year plans feels recent to me, but I've read that many Russian teenagers and children are woefully ignorant about the period.

This will tell them all they need to know:

Maybe now's the time to watch 4

It's a film which stays with you, the landscapes and moonshine madness have a powerful effect.

Really enjoyed this. Reminded me of a CD I have by the fabulous Kremlinaires.

I love Elena's voice too, and that gloomy ballad is quite catchy really.

I think our Vlad should put away his moobs though. Enough, Vlad, please...

Thanks Lucy - I'll look out for it.

Martin - That looks like a great evening out! I love the music.

Sarah - Vlad would probably fix you with a steely glare and insist that they're pecs, not moobs.

What are those singers wearing!! Times have certainly changed, but as Putin ably demonstrates in the first picture, the Russian flair for dubious taste is undiminished.

Well done with the Russian text, by the way

I loved the way all the band members kept swapping roles. It was like a demo reel of their music talents. Annoyingly catchy I thought. The haunting Elena reminded me of Sade; that same smoky note to it. Very enjoyable.

BTW as you expressed a wish for some vicarious Lanzarote enjoyment, you could pop over to my latest post when you have a minute to spare,

Oh dear. When I saw your the title of the post I was expecting endless train journeys, fur hats and cavalry. Which is even more outdated. I think I am obsolete.

Apart from the cavalry, I don't think much has changed. The Russian Soul endures.

That is by a long long way the most beautiful looking horse I have ever seen.