It's been one of those weeks. It started well enough and I was going to write a blog post about a very enjoyable pub crawl along some of the historic riverside inns that lie east of the Tower Bridge, including the Mayflower in Rotherhithe and the Prospect of Whitby in Wapping.

I would have probably included these photos: 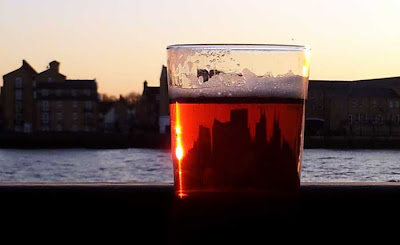 London, through a glass, darkly 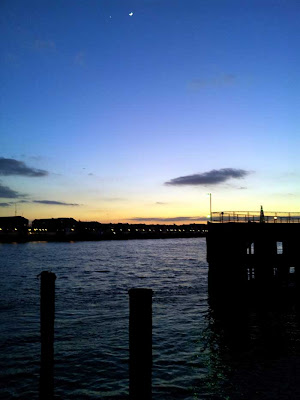 I might also have mentioned the Prospect of Whitby's literary and artistic associations - Pepys, Turner, Dickens, Whistler and Daniel Farson - along with an incident there in 1996 that wasn't my finest hour.

But the week unravelled and by Wednesday, it felt as if several months had gone by. Perhaps I'll write about it one day.

In the meantime, some readers may remember this clipping from a couple of years ago, featuring the most 'mature' 13-year-old I've ever seen: 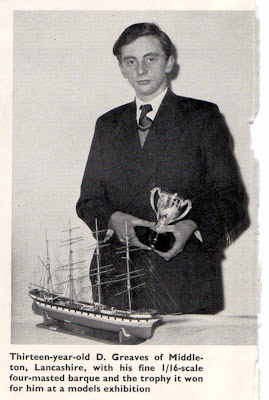 I've reposted it because I have a strong feeling that D. Greaves of Middleton is also featured on the cover of this book, which I found last week: 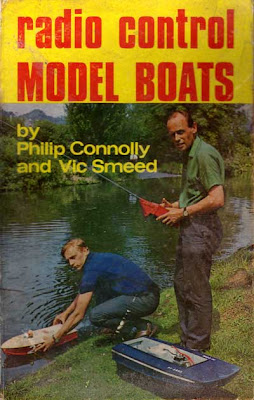 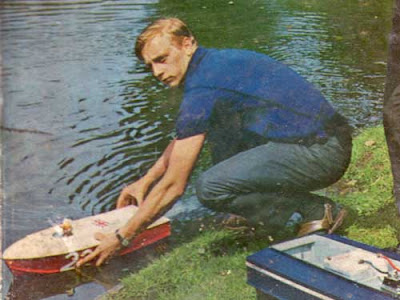 I wonder what happened to D. Greaves? I tried finding him on Google, but the word 'model' yielded some results that had very little to do with the radio-controlled boat world. It didn't help that he came from a place called Middleton either.

It will probably remain a mystery.

I wish that I could be one of those people who play with radio-controlled boats at the weekend. Perhaps I'd belong to a local club and talk to fellow enthusiasts and every December we'd have our annual Christmas dinner, during which guest speakers would regale us with amusing anecdotes of exploding boats, lost signals and aggressive swans.

I'd sleep soundly at night. I wouldn't worry about my son and I wouldn't give a second thought to Iran's uranium enrichment programme, the continuing economic crisis or any of the other things that flitter through my mind at four o'clock in the morning.

But my mind has already raced ahead to the broken marriage caused by an excessive devotion to radio-controlled boats, the unsatisfactory friendship with Vic Smeed and the loneliness of the annual Christmas dinner.

Perhaps I'll buy a dog instead.
Posted by Steerforth at 6:31 pm

That Vic Smeed. He's a wrong 'un, you just know it.

It's him or Vladimir Putin...I used to love watching the radio-controlled boats in the park when I was a kid, and yearned to own one. Not one of the waterborne bathtubs featured on the cover here, but an accurate scale model of, say, Ark Royal complete with aircraft, or possibly the Bismarck. The smell, of oil and goodness knows what else, was very evocative.

Definitely a socks with sandals sort of world, though, isn't it?

Oh dear, Steerforth, you seem low in spirit. I hope this week is an improvement on your previous one. Chin up!

Tim - Yes, although I've heard that he does a lot of work with the local boys' clubs.

Mike - Good God! Yes, it's 'Action Man' Putin, possibly when he was a KGB agent, infiltrating the model boat world in Britain.

Martin - Thanks. It was a rather harrowing week - several meetings with people about my oldest son, who has stopped going to school (and won't even venture out of the front door). It isn't stuff I can (or should) blog about, but it casts a long shadow over everything.

On the plus side, I had some good news on the bookselling front, so the week ended on a more positive note.

Smeed is rather over-compensating with the whip aerial.

Think about a remote-controlled dog as an interim stage - they have less attitude.

The dog idea sounds good. I recommend a beagle, especially one of the smaller 13" varieties. Lovely friendly animals, and once they get used to their new home don't bark as much as people think. They are also very loyal. And they like to walk which means I have an excuse to go on rambles with ours.

Chickadee - I think I'll go with Rog's recommendation for the time being. A radio-controlled dog is an excellent idea.

Children, who'd have them: but it will be all right, even though that seems unbelievable when you wake at three in the morning. I like the Prospect of Whitby.

Sorry to hear about the difficulties you and your family are facing. There are no worse worries than those involving your children.
I'm sure you and your wife are in touch with many families facing similar challenges, but I'd still like to point you to Deb, whose blog focusses heavily on the issues surrounding her son and daughter's refusal to attend school, and the ensuing battle with the authorities:

I really hope you all get the support and respite you need. I'm so glad you're able to continue to blog.

My sympathies over the meetings. I assume they are the sort that you go to clutching your file of assorted pieces of paper and a written list of important points and questions to be asked. And when you get home there is always one heading that you forgot to raise, and a couple of things where you feel your point did not get picked up. But that is life! I do reckon that is important not to expect people to have read the notes or to have remembered what they did read. And sadly their notes probably only contain the reasons for taking whatever action they did, and don't have a full picture of what went before.

A dog sounds great. Go for it. And if you can train it to operate a radio-controlled boat, that's £250 from 'You've Been Framed' for starters.

Animals can be a good means of reaching tricky children too and instilling in them a sense of responsibility for another.

That is definitely the Greaves child grown up and looking exactly the same. I went to school with a girl like that. She now looks exactly as she did when she was 14 - rectangular.

Sorry to hear about the school/child issues. My son knows a couple of kids his age who refuse to go to school. It used to be called school phobia when I was that age, and a girl in my class had it for a year. She took lessons at home, kept and went to university as though nothing had happened.

Lucy - Thanks for the link. I've just read this post -
http://www.aspieinthefamily.com/2011/09/update-on-my-son-anxiety-sensory-overload-and-autism/ - and it's horribly familiar. My son isn't autistic, but her story still rings lots of bells.

Anonymous - It sounds as if you're speaking from experience. It is frustrating to come away from a meeting realising that everything's still up in the air and the next appointment is months away. But at least each meeting amkes me wiser.

Laura - Mrs Steerforth isn't at all keen, so I think it will be a radio-controlled dog for the time being. Perhaps we could help out at an animal rescue centre.

Sarah - Thanks. It seems to be Everything Phobia at the moment, apart from a particular computer game that he plays online with a friend.

I can understand someone not wanting to go to school, but when they turn down days out to their favourite places, that's when I start worrying.

Fortunately, the school have been great, so there's no pressure from them.

"The loneliness of the annual Christmas dinner"

So sorry to hear about the difficulties your son is having with the school. It won't be any comfort to you, but from our own experiences I've concluded that the system is simply broken for many/ most children with special needs or even difficulties short of SEN (and I also apologise for lapsing into jargon). You have to struggle so hard for the slightest accommodation.

Wow, D. Greaves grew up kinda hunky, didn't expect that after the original post! I always enjoyed the unexpected handsomeness of Derek too.

So sorry to hear about your rough week, thank you for still having the generosity of spirit to share light-hearted things that make people smile. Sending you warmest wishes from Glasgow :o)

I'm assuming that you watched the Poliakoff masterpiece 'Shooting The Past" - I think you may have just had a 'moment' that corresponds to the final scene, where Liam Cunningham had his whole, lost and forgtten personal history revealed to him by a picture researcher from a photographic archive. D Greaves... he must be out there, somewhere - in dozens of snaps - family photo's and works dinners records. It's also horribly familiar to anyone who remembers a specific episode of sapphire and Steel... the one with the faceless monster who lived in photographs.

Having had a truly awful week myself ( and it's barely Tuesday ) - you have my sympathies, and ah! how I miss living in the East End and drinking in the Prospect...

David - I'm coming to the same conclusions. Some of the people I've dealt with have been very helpful, but the system as a whole doesn't seem to work as well as it should.

Richard - I missed 'Shooting the Past', but I remember Poliakoff's 'Hidden City' which also touched on similar themes. As for 'Saphire and Steel', that was a chilling story that overcame the limitations of the dodgy Anglia TV treatment.

Actually I did before it became clear what an absolute bawbag (forgive my language but really, that awful man!) he is. No amount of bare chested bear wrestling photographs are going to make up for that.

But a version of him that wore natty blue polo shirts and posed gracefully yet intensely by a river even in socks and sandals...what can I say, he floats my boat ;o)