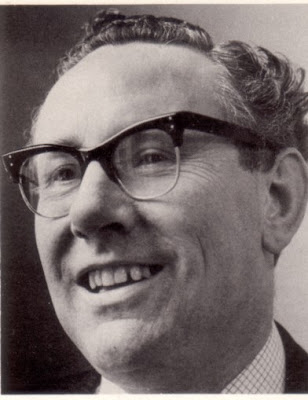 "What was your idea of what's happened? Who do you think survived? Just the teachers and bank clerks and local government officers, with some nice honest policemen, and perhaps the chief constable of the county as President? That's the way it ought to have been. But things weren't done nearly as neatly as that. What did you expect, for God's sake? The orderly people, the people who could plan more than a few days ahead, have always been in a minority."

From 'A Wrinkle in the Skin'.

Samuel Youd, known to many readers as John Christopher, died last Friday. He would have been 90 in April.

I'm sure that there will be a growing number of obituaries appearing over the coming weeks, but in the meantime this enjoyable interview gives a good overview of Youd's career.

A very enjoyable interview, indeed, Steerforth. Thanks for the link. I've never been a great fan of SF, but this is a good read for anyone interested in writers and/or writing.

John Christopher was a much underrated writer who I discovered in my late teens, although it was some years before I discovered that his real name was Sam Youd (or Christopher Samuel Youd, to be precise) and a master of many genres.

I had just finished devouring all that John Wyndham seemingly had to offer and stumbled upon a Penguin edition of The Death of Grass, drawn to its cover of a bleached bovine skull, crawling with ants. The book had brought him acclaim when it first appeared in the mid-50s and was possibly only bettered by A Wrinkle In The Skin (my favourite at least). In terms of SF and the post-apocalyptic disaster novel, he was Wyndham’s natural successor and every bit as good but the literary world had already let one SF gatecrasher sneak into the fold and they seemingly weren’t about to embrace another.

His output was also prodigious, with 59 novels and short story collections appearing from 1949 to 2000 and the standard of writing was generally very high, irrespective of the genre. I believe that Colin Brockhurst’s piece was the last in-depth interview that Sam gave. Anybody seeking further insight would have to seek out the March 2001 issue of Interzone, which was something of a belated “John Christopher” special and featured a lengthy 13-page in-depth interview.

I've only read The Death of Grass, and it was fabulous.

Martin - I'm not a fan of SF books either, but I don't think Youd was a true science fiction writer. Like John Wyndham, or his neighbour Christopher Priest, the fantastical plots were simply a vehicle for exploring the human condition.

Peter - Thanks for reminding me about the Interzone interview. I read it a couple of years ago and tried unsuccessfully to remember what it was called to include a link in today's post.

Quite why he has been so eclipsed by Wyndham is a mystery. But I have faith that if we all keep plugging away, the balance will be redressed.

Annabel - I remember reading your excellent post and feeling heartened that somone who has read so widely rated The Death of Grass.