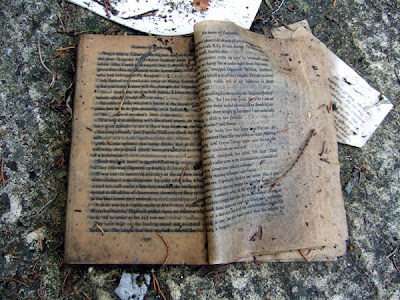 I left my job on Friday. I had been dreading my last day there for a number of reasons and it proved to be a far more emotional experience than I had anticipated, thanks to some very strange behaviour on the part of my managing director, who overruled his colleagues’ earlier offer to sell me some stock.

When asked why, he explained that I was now a competitor. I suppose I should be flattered, but it seemed unnecessarily petty and mean-spirited.

For a few minutes I felt like walking out. It would have been so easy to get in the car and drive away, but I decided to hang around just in case there was a surprise presentation with a succession of heartfelt eulogies. It’s just as well, as there was.

Also, I would have missed this: 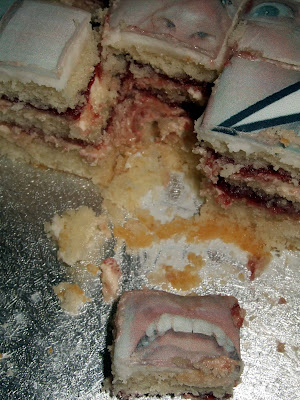 It's a cake with my face on it (printed with edible ink). I was really touched that someone had gone to such lengths, but slightly disappointed to see that nobody wanted my tongue in their mouth. Nothing changes. In the end, I had to eat my own mouth.

By the end of the day my mood had lifted. Several directors thanked me for everything I'd done for the business and, for the first time in my working life, I really felt as if I had accomplished something. Managing a bookshop was always a work in progress, unresolved and incomplete, in which leaving felt more like absconding. Here, I could go with my head held high. Sort of.

My official reason for resigning was the errant politician's favourite: to spend more time with my family. But, of course, that was only half of the story.

The simple fact is that I'd had enough of it all: commuting, working nine to five, managing people, going to meetings, filling in spreadsheets, worrying about sales targets and having to pretend to be a certain type of person. I think that the recent stresses of family life had simply reduced my ability to tolerate the intolerable. As much I liked some of the people I worked with (and for), I felt like a round peg in a square hole.

I value time more than money. I also value intellectual curiosity, a sense of the absurd, integrity and kindness. These enduring values are far more important than the ephemeral trappings of worldly success (not that I had many ephemeral trappings to worry about).

Several years ago, when I was unemployed for a while, I read Tom Hodgkinson's exhilarating manifesto 'How To Be Free' and recognised a kindred spirit. It strengthened my resolve to avoid being a wage slave, so it was apposite that in today's Independent, he wrote this:

The point is that if you yearn to escape the stifling restrictions of the nine-to-five in the corporate or state bureaucracy, your only alternative is small business. Every artist is an entrepreneur because you have to do your own tax and invoicing. In my talk I quoted GK Chesterton's famous quip, "Too much capitalism does not mean too many capitalists, but too few capitalists." Most of us are working for the megamachine when we should be creating our own mini-machines. This is why, in order to escape slavery and embrace liberty, we need to face up to taking responsibility for our own lives as traders.'

I couldn't agree more. Steerforth Books may end up being a complete disaster, but I have to try.
Posted by Steerforth at 3:50 pm