October is the Cruelest Month 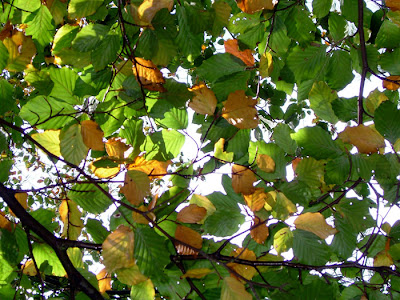 It's ironic that now I have all the time in the world to write, my blogging has almost ground to a halt. This wasn't supposed to happen. I'd imagined writing posts about the progress of 'Steerforth Books' and my first steps in the precarious world of self-employment.

Sadly, the last four weeks have been a bit of a disaster. Within 24 hours of leaving my job, everyone in the Steerforth household succumbed to the horrible Norovirus, which had the one redeeming feature of rapid weight loss.

At times I felt as if I'd made a terrible mistake. Lying in bed, surrounded by people making zombie-like groaning noises, I couldn't help looking back fondly to the ordered world of my last job. Perhaps I had just made one of the most stupid decisions of my life.

In the end I wrote a list of the positives and negatives of my last job. There were two positives: the books and some of the people. The negatives were everything else. Suddenly everything seemed much clearer.

It's just as well that I felt reasonably sure about my move, as the month didn't get any better. Bits of the house collapsed, someone died and both of my sons succumbed to further illnesses.

As for Steerforth Books, it was just a name. I had no stock to sell, thanks to my former managing director's last minute intervention.

It would be easy to become despondent, but I'm fairly sanguine. There are times when it pays to be a pessimist and before I handed my notice in, I made sure that my business plan could survive a number of setbacks (including a mean-spirited former employer). I knew that it could take months to get Steerforth Books off the ground and planned accordingly, so it's not over yet.

I will be glad to see the back of October, but it hasn't been completely dreadful. I've been enjoying Vasily Grossman's epic masterpiece 'Life and Fate', watching some long-forgotten British films of the 1960s and trying to become a domestic god, with mixed results. I also had a very pleasant evening out at the Lewes Arms with two fellow bloggers.

In some ways it's not a bad life, but even if I could afford to never work again, I don't think I'd change my plans. I really miss working with books.

I particularly love being surrounded by old books and sometimes feel as if I am in the literary equivalent of a telephone exchange, connected by invisible skeins to the lives of strangers. However great or absurd the titles are, they have furnished both rooms and minds. My passion, I suppose, is to try and find them new owners.

So the plan for the rest of the year is simple: fix the ceiling and get some books. Now that I've come clean about my lack of progress, perhaps I'll also write some more blog posts - there are recent discoveries that I want to share.
Posted by Steerforth at 3:34 pm

Email ThisBlogThis!Share to TwitterShare to FacebookShare to Pinterest
Labels: self employment, steerforth books

I hope the family Steerforth are all now fully recovered; best of luck with the ceiling and I am sure you will soon have some stock and will get the business up and running.

It's almost November, you can put the last month behind you and get onwards and upwards. With your obvious passion and experience there's every chance of success.

Illness, death and crumbling house aside, I think letting go of an old routine has a big effect.

You have to follow your passion, so you're on the right track. You only left your job a few weeks ago, so don't be hard on yourself.

Do keep blogging, it doesn't have to be an update, I, for one, could happily read your descriptions of a trip to the shop.

We were struck with the dignity-stripping Norovirus in December 2009, an unforgettable Christmas that year, for all wrong reasons.

I hope you all feel better soon.
November will be kinder.

Good grief! And there was me thinking you were busy...hope everything is getting back on track at least.

I've given your contact details to a couple of friends who've recently moved to Lewes from N London and are looking to move some books on. No idea what, but there should be some quality stuff there.

I hope you're all feeling much better by now, and that you can soon attend to the essentials (ceiling, books) and perhaps also do some blogging. It still sounds like you've made a great move, and I also predict success. Be kind to yourself!

Hmmm. Looking on the bright side, I suppose if you hadn't left your job you'd still have been hit by all those crises - but with Mean Spirited Boss (isn't he a character out of Dilbert?) breathing down your neck.

I'm looking forward to being a customer of Steerforth Books, but happy to wait as long as it takes. KBO, as Churchill used to say.

Thanks - I really value these comments and the generosity of spirit behind them.

The "destruction" of the home, the revelation that those "in charge" were trying to hold you back (the old boss), the symbolic death and rebirth of going through a great sickness. Sir, you are on an epic quest. Soon you shall meet a kindly old wise man bearing great advice or a magical box of books.

You know, I think all epic quests have more bouts diarrhea than the tales tell us, so don't feel so bad. Godspeed young mortal.

Hi Steerforth,
I'd say that everything going upside down at the very moment of transition is a rite of passage, or a test of your commitment, not an indication of the future, not a reason to give up. So I'm glad you're not.
Your two positives are the only two I've been able to identify when I've left a bookselling job also.
Having always worked with new books, I've recently got a job in second-hand bookselling, and I'm enjoying it hugely - partly because I get to delve back into the past, and not just have to deal with whatever's hot today. Cheers, Faisal.

Ryan, you're absolutely right. There is a noticeable absence of diarrhoea in our epic literature. Now that I have passed through Tod und Verklärung, I feel that it is only a matter of time before a kindly stranger gives me the opportunity to change my life.

It's market day next Saturday. I'll look out for a man with magic beans.

"There is a noticeable absence of diarrhoea in our epic literature"

This is clearly a big omission. Doesn't that fellow in Into The Wild die from poo? Can't think of any more.

More importantly, I hope things get better soon. Sounds like a miserable month. I look forward to reading about Steerforth books prospering...

Just as Desperate Reader said, November means a fresh start... You have so many people rooting for you and so many good wishes beamed towards you, that it will all come good quite soon. AnnaC

Faisal - I prefer your philosophical explanation to my deep-seated fear that I may just have got it wrong. Thanks for the good wishes.

Likewise Anna. I feel like Apollo 13 - in trouble, but with lots of people crossing their fingers for me.

Sam - Yes, I think he got into a trap that some of Sir John Franklin's men fell into (shortly before they ate their shoes) - the only food he could find gave him diarrohea. I haven't faced that predicament since I lived in a hall of residence.

By the way, thanks for passing the details on. I'm glad that the North London to Lewes portal is still active.

I can only echo the encouragement and good wishes, already offered by others. Doing your own 'thing' can be both exhilarating and confusing at first. Stick with it, you're on the right track.

Glad you’re getting over the sickness bug. We had it last year and you really do think you are dying.

Now that all that is behind you, and you’ve started restoring the house, and the family, to former glory, the only way can be up!

Your eventual success will only feel all the sweeter for the hurdles you are currently having to leap (or crawl) over.
I felt so hopeful after a bout with gastric flu in August: hopeful that the weight might actually stay off. It didn't. It never does. But my books don't care. They're such understanding things!

Forgive me for going off on a spiritual tangent here, but I think that there is something to the notion that when one surrenders one's old beliefs (ie for you, the thought that you need the safety of the old job and its accompanying negatives) one will be immediately rewarded with the anticipated positives of the bold new venture. But what often seems to happen instead is that, as a gift for the newfound show of strength, one gets a massive kick up the arse instead. Like some sort of cosmic test/reward of the "You don't get sent anything that you can't handle & you've just gone up to the next level. Well done!" variety. Then right after that it gets a LOT better. So you're likely in for a much nicer November. Keep courage! We're all rooting for you. xo

P.S. Very sorry about the death. Hope you're not grieving too horribly.

Steerforth - Sorry to hear of your recent bad patch. Maybe the illness was a metaphoric cleansing of all that has gone before, and now you can begin again.

One of my very favourite welsh words is Ymlaen.

I promise to buy as many books as possible when Steerforth Books is up and running, by the way. Any bookseller that is as passionate as you are about books has already made the sale to me.

Very sorry to hear about your awful October. That virus is HORRIBLE. We had it late last year - it was the most ghastly few days I can ever remember having.

Here's to a much better November, on all fronts! Good luck with your book hunt. I'm very curious to hear if the wise person selling beans (or biographies) shows up on Saturday ...