I've always been very dismissive of camera phones and could never understand why they became so popular. The picture quality was consistently awful and transfering the images to a computer was tedious, but in spite of this many people still chose to record some of the most important moments of their life with photos that made the Kodak Instamatic look like the Hubble Telescope. Why?

However, I have now discovered a phone that has a half-decent camera: 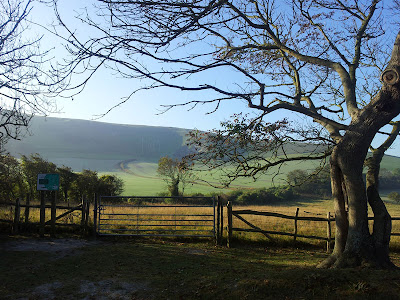 This morning I was driving back from a particularly awful car boot sale that would have made a street market in Burkina Faso look luxuriantly decadent. I don't what I hated most: the piles of used shoes that looked like something out of 'Schindler's List', or the dew-soaked DVDs of low budget horror films like 'Satan's Little Helper'.

After such a depressing experience, I decided to lift the spirits with a visit to the Long Man of Wilmington. It was a beautiful morning and as I got out of the car, I regreted not bring a camera with me.

Then I remembered my new phone: 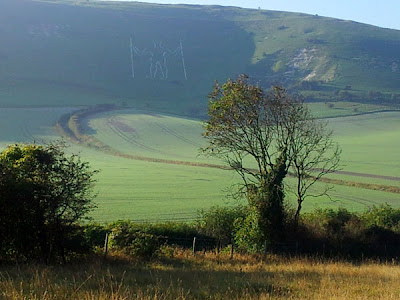 It's not a great photo. The saturation's not right and the zoom has affected the sharpness, but compared to the old VGA images that I was used to, this was a revelation. It's almost good.

This image was taken without the zoom function: 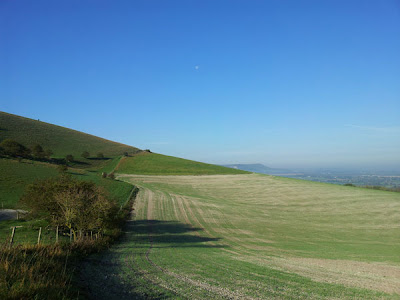 Not great, but not bad either. 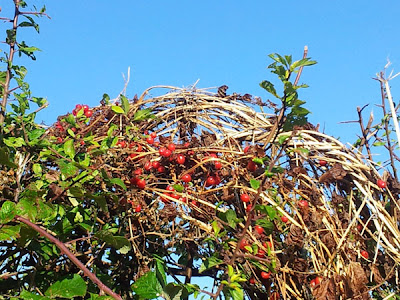 This lacks sharpness, but the colours are far richer than the washed-out, grainy sub-CCTV images on my old phone. 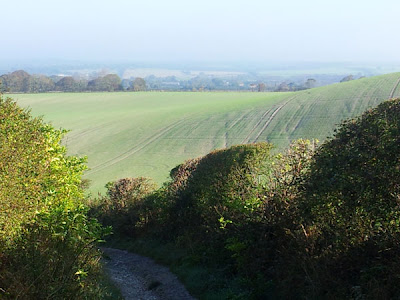 A decent camera would have been able to cope more effectively with the contrasts of light and dark, but it's still perfectly acceptable.

As I fiddled with the phone's touch screen, The Long Man looked on impassively. He'd seen it all: Roman centurions, Saxon thanes, medieval pilgrims, Victorian farmers and, today, people in garish fleeces walking their oversexed dogs along public footpaths.

I shall be seeing a lot more of the Long Man in the future. I think we're going to get along very well.
Posted by Steerforth at 8:23 pm

I remember when I first saw someone using a camera phone, it seemed incredible. Hard to believe we used to wait a week to get 24 grainy images processed, at least half going straight in the bin.

I've just finished a post about being in church; parents were snapping away on their camera-phones and sending them instantly to the absent family members. 'Harvest - LOL'.

Use your camera phone to document your new venture, it'll be a good way to look back diary-like on all the changes and developments. They are exceptional quality for a phone.

Cameras have come a long way, the reason we use them hasn't changed much.

Very reasonable photographs, indeed. Sometimes we are still surprised that technology has advanced for the good. I like the idea that the Long Man looks over Steerforth's Books.

Great photos for a phone. My phone isn't very new so the photos are a bit hit and miss, and it is a pain to download. Still, they'll do in an emergency...

Nice photos! And good to see a post in your blog this morning - I was wondering how Steerforth Books was doing. Are you getting off the ground okay?

I also like that the Long Man is watching over your enterprise. :D

The pictures look fine to me!

Hope things are going well for you.....

These pictures capture your 'moment in time' perfectly. You don’t have to worry about shades of light and dark if you are preserving a memory which otherwise would be lost. They tell a story perfectly. The hedgerow with the red berries seemed very Autumnal.

Isn't there a saying that the best camera is the one you have with you... I find myself taking more interesting pictures (not necessarily good pictures) just because I have a camera on my phone

I think they were staggeringly good photos Steerforth, considering they came from a phone. It wouldn't happen to be a 'Jesus phone' by any chance?

Isn't it odd how some car boot sales are utterly depressing, and yet others are almost joyous, people talking, bartering, the smell of high fat, illicitly delicious food being cooked. The pile of used shoes sounds horrible.

Your part of the world looks great, by the way. Must visit the South Downs properly one day, I've only skirted the edges in the past.

I like your photos very much! I felt as if I'd been on a wee excursion myself. I agree with Martin, it's nice to know the Long Man looks over Steerforth Books. And good to hear you are both getting along well. All the best!

Thanks - I'm glad that the photos have gone down well. I'm still sticking to cameras, but it's good to have a decent back-up.

Just catching up on my blog reading. I'm so excited that you are going to open your own store!I know it will be great. Wish I could send you some of the 10,000or books hanging around my house! I'm sure I'll be buying from you soon!
Good luck,
Libby in West Texas
salsgirl@att.net

This reminds me of an article I read a while back about Joel Grey, the actor from 'Cabaret', who's also a keen photographer. He snapped some really great shots with his phone when he found himself out without a camera and made a whole book out of them.

I like the idea of trying to work with the limitations of the equipment to get an interesting result, but haven't had much luck with my own phone. The picture quality is excellent but the lag between pressing the button and it actually taking the damn picture rather sucks the spontanaeity out of things.

Great to read your blog again. I've missed you in the past couple of weeks. Love the comment about the modern day walkers with their polar fleece and over-sexed dogs gamboling along the lanes.

Hope all is going well with settling in at the new digs for your business,

Onward and upward and may the Long Man continue to smile upon your efforts!