The 1920s might have roared for some people, but probably not for the subjects of a photo album I found yesterday: 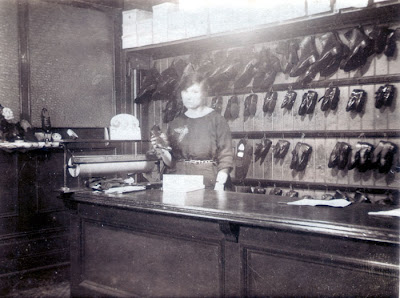 Although I was born in the 1960s, this image feels very familiar to me. When I was a boy, there was a shoe shop in the road next to mine that had been opened by two brothers in the 1930s. It occupied the ground floors of two adjacent houses. One half contained a shoe repair workshop, where the brothers could usually be found; the other contained a showroom with countless boxes of shoes. I used to buy my Clarks Commandos there.

The workshop was like a time capsule. Nothing had been changed for 50 years and the fixture and fittings were all painted in a shade of brown that had probably become obsolete in 1949.

Even when the brothers were in their seventies, they continued to work, buffing leather shoes over ancient lathes. They finally retired in the early 1990s. 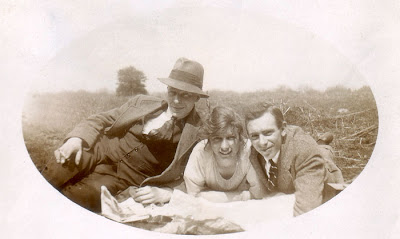 I love this idyllic photograph for so many reasons. It was about to be binned, so I'm very glad that it will now be seen by more people than ever. 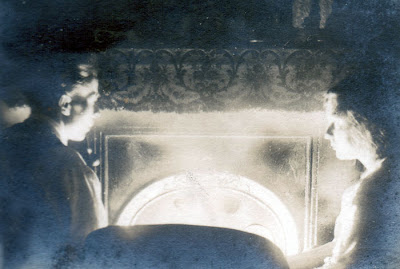 I receive lots of old photograph albums at work. Many contain nothing more than snapshots which are of little interest to anyone; but the best have images that are either historically or artistically appealing. This photo may just be the work of an amateur who was having an 'artistic moment', but it doesn't deserve to be consigned to oblivion. 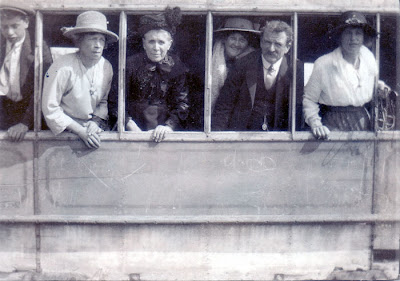 Is that graffiti? So much for the good old days. 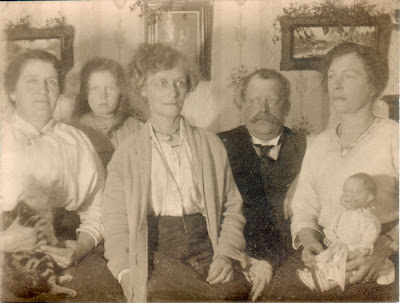 This is a slightly creepy photograph: a man who looks like a waxwork dummy and a woman holding a doll. Very odd. 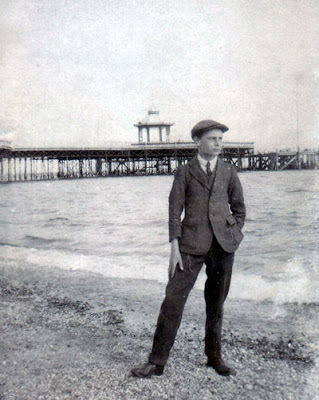 This is a bit of a Caspar David Friedrich scene, with the protagonist squaring up against the forces of nature. 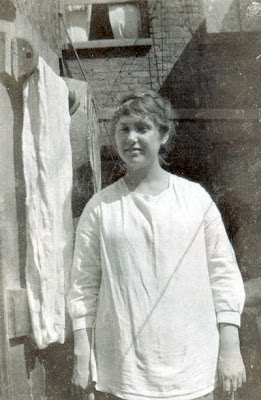 This is a rare, naturalistic 'Monday is washday' scene. No Sunday best here. 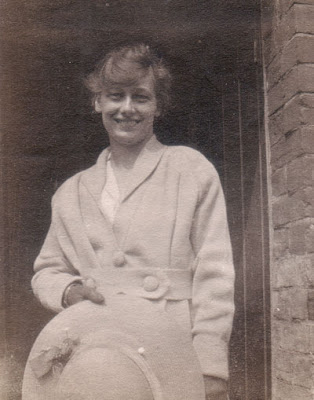 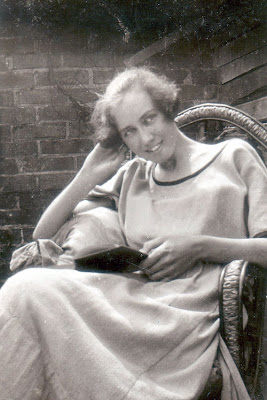 The first recorded sighting of a Kindle. 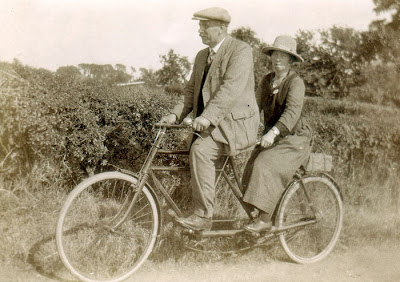 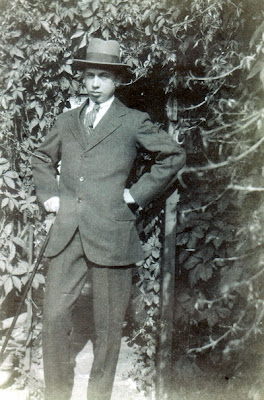 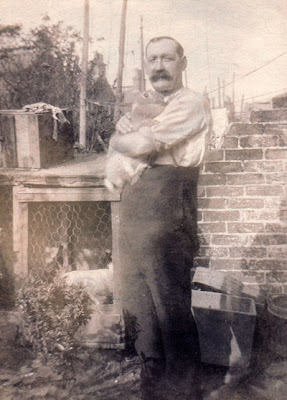 This is a very touching photo (assuming that rabbit stew was not on the menu). 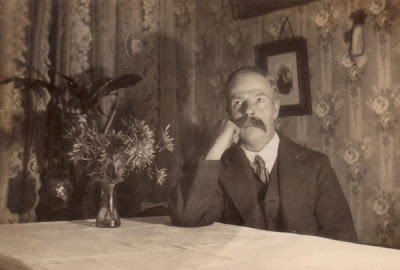 This pensive pose is an early example of flash photography (look at the shadow in the background). 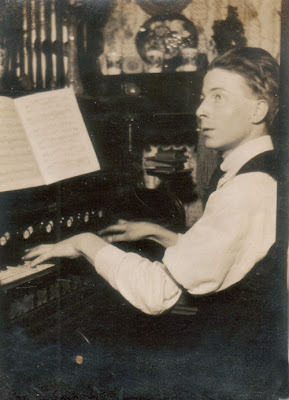 This Danny Kaye lookalike would have loved a full-blown Hammond organ. Perhaps he lived long enough to see one. 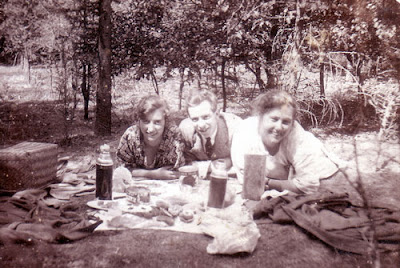 Finally, a picnic scene. The location and identity of these people will always be a mystery - I wish that I could transport myself back there, as they look as if they're having fun.

When I was 20, I met an elderly Welsh farmer on the outskirts of Lampeter. He looked at me and said "Ydych yn siarad Cymraeg?"I replied that I knew a little (I'd worked in a Welsh-speaking pub during the National Eisteddfod of Wales), but it would be a very limited conversation. He immediately switched to English and, like a man possessed, told me that I must sort out my photos:

"Write the names and dates on the back of all of your photographs. I've got albums and I don't know who they are. It's gone. Forgotten. I can't tell my sons who these people are. They're strangers. You need to write everything down."

I promised him that I wouldn't forget and I'm glad that the internet has given me the opportunity to repeat this man's sage advice.

Posted by Steerforth at 5:39 pm

I have loads of old photos of my family like that from the 1920s and 30s; I wish my grandmother had written the names and dates on the reverse. We have been trying to identify people but my mother and her big sister don't recognise all of them.

The young man at the beach seems to have grown out of his jacket!

I love these photos. So much smilier than the Victorians, except for those featuring leftover Victorians!

Yes my mother has a large stock of photographs from this era with no identifying details. And yet our ancestors were so meticulous about other things in life - why not their photographs?

I love "Kindle Woman". She is so thoroughly modern, with her bobbed hair and informal pose.

When my father was working on a book about our family, a lot of his work involved asking relatives to show him their photographs and identify the people in them.

Some interesting photos here, Steerforth. Are my eyes deceiving me, or does the chap in the last photo also appear in the second of the sequence? If so, he could be a serial picnicker!

Yep, what Martin H said. The two picnic photos have the same two people in it. They obviously REALLY liked picnics and, frankly, who doesn't? This is a fabulous selection of pics and I particularly like the lady with the big hat, she's got an incredibly modern face.

I love imagining a story to match the photographs you share. I also enjoy their mystery and have no desire to know the names/dates. My parents own some fascinating photographs, some with dates and other information on the back. I usually prefer my own story , the true tale will be either heartbreakingly sad or boring.
The pensive chap with the shadowy photographer lurking behind him - he's about to explode with rage because his rabbit stew isn't on the table.

As usual I found them all really interesting. The slightly creepy one probably has a story behind it. As Lucewoman says we can only imagine, but I bet we’d get some really good results from a creative writing class in any school!

I have a theory about the doll. The small girl wanted it in the photo but placed where the child was Dolly wouldn’t have been very visible. She probably insisted that Mama allowed the doll to sit on her lap, otherwise she’d have a tantrum. This could also account for some of the expressions. We have a family group shot which my mother nicknamed 'The Glums’ for a very similar reason.

Can't help it. The woman with the large hat is beautiful.

That shoe shop photo makes me think, of course, of poor Dickens....

No, the twenties weren't great. Neither were the thirties, till Roosevelt came along.

Though unrelated to this, I thought you and your readers may find this post quite interesting/funny:
http://goo.gl/yGV5p

The shoe shop photo and your recollections are fascinating. A friend of my Dad's worked as a clicker (someone who works the leather and then feels for the best bit to cut out for the shoe) from the late 50s right up to the late 1990s. He was one of the last of his kind.

I can picture the farmer so clearly. You have captured just right the cadence that he would have spoken with (I grew up in west wales). Reminds me of Iago Prytherch as described by RS Thomas, but perhaps not quite so vacant.

By the way, I don't know if you are aware that there is a link to your Stephen Fry post in the Guardian's Guide this week (On the Internet Page)? It put a smile on my face.

Yes Genius, I spotted it yesterday on the visitor stats. I read the Guide yesterday morning, including the page with the link, but didn't notice it.

I'm glad you think I captured the farmer's intonation correctly.

Thanks for the link Lucewoman - definitely worth a visit.

Thanks also to everyone who commented and made me saw these pictures from a new perspective, from serial picnickers to rabbit stew rage!

Your Welsh farmer's advice sounds like something from a Penelope Lively novel. She seems to have lots of old folks worried about memory and historical context. Also, for some reason (maybe your mention of the Eisteddfod) it puts me in mind of the famous lines from Voices from Akenfield where the 81-year old horseman talks about the role of singing in his life: "There was such a lot of singing in the village then, and this was my pleasure, too. Boys sang in the fields, and at night we all met at the Forge and sang. The chapels were full of singing. When the first war came, it was singing, singing all the time. So I lie; I have had pleasure. I have had singing."

I hesitated, because I'm starting to feel my behaviour is edging towards 'crazed stalker', but something just caught my eye and again, I was reminded of your blog:

The blog is craft-centred and the twenties photographs a one-off addition.

There are names and dates on most of the photographs, so it fits nicely with your post.

I'm so fond of the Perfect Husband and Perfect Wife poems, I wonder if times have changed that much?

Lucewoman - Please keep stalking ;) I love getting comments and you've posted some great links which I really appreciate.

Thomas - Thank you so much for quoting that passage - it bought tears to my eyes.