I must admit I'd been having sleepless nights about handing my notice in. How would my employers react? I knew that they regarded me as a permanent fixture and had planned accordingly. Would they be angry, indifferent or sympathetic?

So far, everyone has been brilliant. Indeed, they've even offered to help me find a way of setting-up in Lewes and I've been told that if my circumstances change, I can go back. I couldn't ask for more.

Now comes the hard bit. I have to find a unit in Lewes that's large enough to store a few thousand books. It doesn't matter what state of repair the building's in as long as it's dry. It also needs to be accessible for lorries and vans. Finally, I need a short lease in case I turn out to be utterly useless at running my own business.

In the meantime, I will be in my current job for at least another month, paving the way for my successor, so I'll continue to share the latest discoveries: 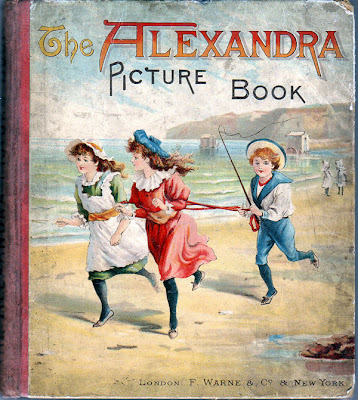 This book appears to be very rare. I can't find any other copies of it on sale. The flyleaf has a Guernsey bookseller's name blind-stamped in the corner, whilst the front endpaper has this bookplate: 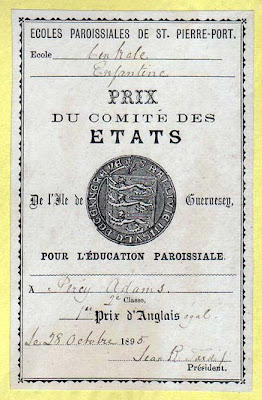 I was surprised to find a bookplate for an English prize in French, but later realised that it was actually in Guernésiais - a Norman French dialect that remained the island's official language until 1972. Today, only 2% of the population speak it fluently, but when Victor Hugo was in exile on Guernsey, writing Les Miserables, Guernésiais was commonly spoken.

The language declined for the usual reasons, but was accelerated when many of the island's children were evacuated to the British mainland at the beginning of World War two.

As for the book, it has some beautiful colour illustrations accompanying a military-themed ABC: 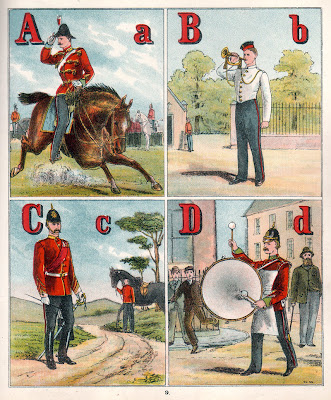 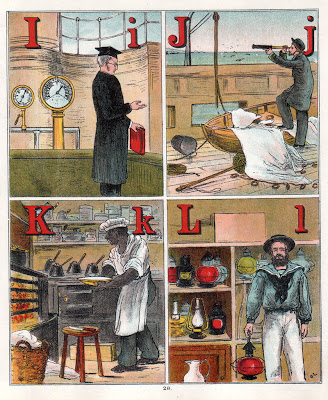 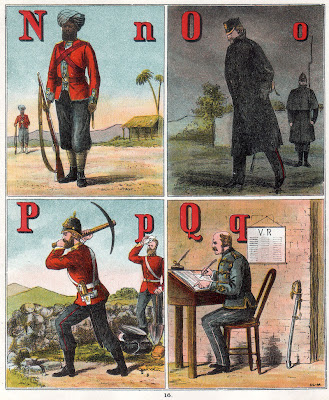 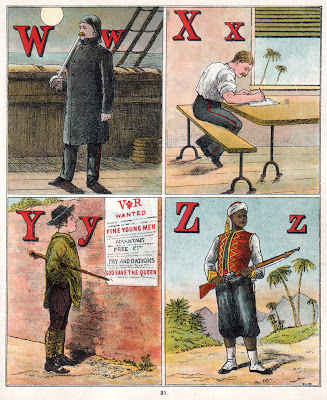 Can you guess what each letter stands for? I've already thought of some (which are unrepeatable).

In addition to the ABC illustrations, there are also some full colour plates: 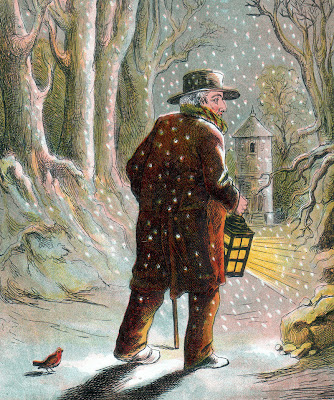 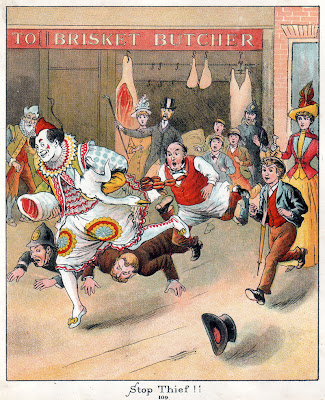 The final scene clearly shows that rioting isn't a modern phenomenon, but in the Victorian age they disguised themselves with clown suits instead of hoodies. The police response doesn't appear to have changed very much.

That's the nearest I get to writing about the riots. I have very strong opinions about why they happened and what could be done to prevent future unrest, but like most of the UK population I didn't witness any of these disturbances. I've lived in thoroughly middle-class Lewes for ten years and London feels a world away.

Maybe it's time for me to go to Tottenham and get down with the kids.
Posted by Steerforth at 10:09 am

"I must admit I'd been having sleepless nights about handing my notice in. How would my employers react? I knew that they regarded me as a permanent fixture and had planned accordingly. Would they be angry, indifferent or sympathetic?"

Perhaps they already knew from your blog!

Forgot to add: you'll probably find getting storage space is your biggest difficulty.

Well it's Z for Zouave, but beyond that and the obvious ones (B for Bugler, D for Drummer)...

Roger - perhaps they did, although I'm not sure if they're aware of this blog's existence.

Yes, finding storage space will be a challenge, but the recession will probably help, with more vacant units than usual.

Does "A" stand for "A man going in the opposite direction from his horse"?

Some are obvious as lapsang says. I’m assuming q for quartermaster, but others are a wee bit obscure. I hope the x isn’t the poor illiterate chap ‘making his mark’! The clerical looking gent would be a padre or chaplain so why is it ‘i’?

The book is beautifully coloured and looks in good condition; someone obviously treasured it.

Hi Steerforth, I haven't read your blog for over a week and just caught up with your posts about starting your own business. Best of luck with it! I am sure it is scary but it sounds like an excellent idea, you certainly seem to have the expertise to make it work.

Change is scary, but you can't ever escape it. Being proactive about it, actively making choices and making it happen is much better than passively waiting for change to be forced on you. Hurrah for being so brave, especially as your personal life hasn't been so easy the last few months. I suspect all of us who follow your blog will be rooting for you :-)

I've no idea what the letters stand for, but I wanted to wish you all the best with your new business. And I do like the pictures.

I'm afraid all of my A-Z suggestions are either immature or in poor taste.
Very impressed with the clown disguise, far more cunning than a hooded sports top. I just hope he had some good quality make-up remover at home.
The fact you were worried about handing your notice in is further proof that you were a loyal and valuable employee. Handing in my notice when I was a live-in nanny was the same, I didn't sleep a wink for a fortnight before.
You won't need to go back, you've been building up to this change for years, probably.
Your next move will be poaching former colleagues - that'll be the final nail in the coffin.

Lucewoman - I won't be poaching anyone, ever. I just want to work on my own from now on, as managing people is exhausting.

I'm certainly not interested in setting up a rival business. I just want to be like Lovejoy, minus the mullet. I'll do a bit of this and a bit of that. And I'd quite happily do the odd job for my current employer.

I just need enough money to pay the bills, put food on the table and cover a simple holiday at a luxury hotel in the Maldives ;)

You're right - I think I have been building up to this change, without even being aware of it. Recent events pushed me over the edge.

Thank you C.B - I suppose I should have added the text, but I like the mystery.

Pinky - I agree; it's better to effect change than be affected by it. I might be making a mistake but the stakes aren't high, so I'd be crazy not to try. Thanks for your words of support.

Little Nell - The book's quite knackered - it's clearly been enjoyed by a lot of people - but the pages are thankfully clean.

The X is for Exile!

Tim - I hadn't noticed that, but you're right!

I'd like to join in the chorus of congratulations over starting out on your own. i did the same over a decade ago and have never looked back.

I must admit, I have two mainly selfish concerns about this career move, though. One is what will happen to all the books, diaries and albums you have been saving from oblivion. Will anyone similarly concerned and eloquent be able to rescue the life of another Derek from obscurity?

Which leads onto my second concern: whether you'll still be ferreting out enough old books to be able to keep them coming on this blog. You have created something which people have a hunger for, you know - a dangerous and wonderful thing! Not that I'm putting you under any pressure, you understand ;-)

If it doesn't work out, by the way, I think you should write a book. Seriously.

Thank you Paul. I shall do my best to ensure that the ephemera still ends up in my hands if it has no financial value.

I fully intend to continue doing what I do now, minus the current constraints of being expected to work X number of hours per day.

I'd love to write a book, but 20 years in the trade has left me feeling rather jaded. I've seen too many first novels pulped to have any delusions about being a writer. But I still might do it anyway, if I have something to say.

Reading about your recent decision to leave your current employment and start your own business, I couldn't help but be reminded of at least 2 quotes by Joseph Campbell that I hope will be encouraging. The first is "We must be willing to let go of the life we planned so as to have the life that is waiting for us." and the second:

"If you do follow your bliss you put yourself on a kind of track that has been there all the while, waiting for you, and the life that you ought to be living is the one you are living. Follow your bliss and don't be afraid, and doors will open where you didn't know they were going to be." I have a feeling that you will be better than fine :-)

Thanks Kim - those quotes echo exactly how I feel. I'll write them down.

Steerforth, I want to add my wishes to everyone else's for your new venture. Good for you to take the leap. I hope it works out very well. Thanks also for the introduction to Guernesiais!

Wow, I take a few days off and what happens? The clown takes off with the brisket and the goose.
And you found another book, too!

Lykke til with the new business. A sense of irony and a sense of humor and a dry storage area. Two out of three so far isn't so bad...

I love the cover illustration. Having an older sister myself, I am guessing one of the girls prevailed upon little brother to play teamster so she and her friend could pretend to be ponies together.

I too am late to your news - but I wish you every success. The idea of being a bookish Lovejoy sans mullet sounds wonderful fun, I hope it makes you enough money too!

Very late with my good wishes, but here they are anyway.

Y could be yeoman, which is probably obvious. I looks like a customs inspector, but I don't know about the mortarboard.