My wife has taken our sons to her mother's house on an island off the coast of Essex. For the first time in ages, I can hear nothing but the sound of death watch beetles and the floorboards expanding and contracting as the sun rises and falls. It is a guilty pleasure.

When I first met my wife, I refused to believe that there was an island off the coast of Essex. It all sounded too Enid Blyton. Then I went to stay with her and visited her grandparents' vast Tudor farmhouse. I'd never been to a home with a grand piano before, let alone two (the second one was in the nursery) and felt as if I'd been sent to live in a novel.

My wife's grandparents' heyday was in the 1940s and 50s. Fifty years on, the men still wore pencil-thin moustaches and drank double whiskies, before staggering into their Rovers for the drive home at a steady 23mph. It seemed such a solid world and I felt overwhelmed by it. But within only a few years they were all dead and the Tudor farmhouse, which echoed with the sound of glasses clinking, risqué jokes and druken renditions of 'A Nightingale Sang in Berkeley Square', was silent. 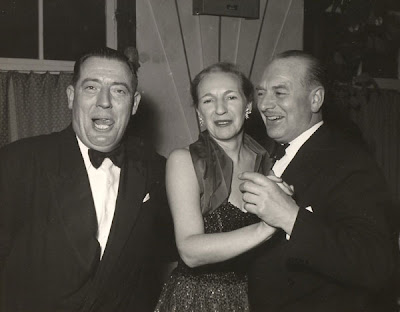 It was a world of certainties and a sense of belonging: the yacht club, the Masons, the Conservatives and the golf club. If there was a dinner dance, Nanny looked after the children. Later, boarding school ensured that the social calendar went ahead without any disruptions.

I wonder what my wife's grandparents made of me, with my strange boots and long black coats, all bought from charity shops: 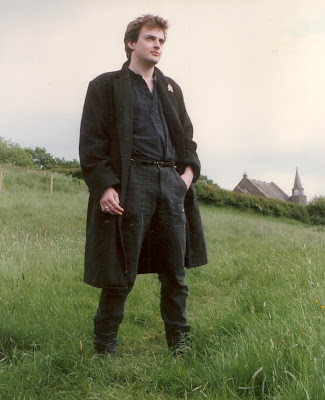 I looked a total prat. But to their credit, my wife's grandparents were never anything less than charming. I suppose they'd seen it all before.

My wife's grandfather once took her to one side and asked what my 'prospects' were. She roared with laughter. I'm not sure if she's laughing now, living in a house that's less than a fifth of the size of the one she grew up in, but luckily she still feels relieved that she didn't end up with a nice young man from the yacht club.

My prospects are still uncertain. I hope that 'Steerforth Books' will at least pay the bills and put bread on the table, but there is still a lot of work to be done. I have 39 days left before I leave the security of salaried employment for the terra incognita of running a business.

Oddly enough, I don't feel at all worried.

Posted by Steerforth at 6:41 pm

Email ThisBlogThis!Share to TwitterShare to FacebookShare to Pinterest
Labels: running a business

Nothing odd about not being worried. Paying bills and putting bread on the table are things you'll always manage, it's time for more than that.
Don't be afraid to display your self-belief, we're not going to shoot you down for it (that Steerforth has changed) .
Time to roll out the cliches; failure is NOT an option, I was BORN to do this, I am the master of my OWN destiny (quite enough?).
Books are not going out of fashion any time soon, unlike the Robert Smith-esque garb...

Has anyone ever told you you looked like Mike Oldfield?


Yes, that was me, too. Had we the money, we would have had the same tailor.

You're right, of course, that your wife's grandparents had seen it all before. They all had. I gleaned onto this truth when, as a 20-year-old in 1983, I found myself sitting beside an octogenarian flapper in a Montreal bar.

I'm sure all will be well with the new venture, though it's natural to worry. (A priest once told me not to worry, that 99% of the things we worry about never happen, which should be some comfort!)

An island off the coast of Essex. Hmm. I will have to dig out our atlas. We've spent a lot of time in Essex
over the last 20 years, but don't think I've ever heard of one of those.

I sometimes wish the world was still the same as the one you describe in your post. Perhaps it was only an illusion, but things seemed much simpler and more secure then. (For some at least.)

Best of luck in your new venture.

Why are you wearing my clothes?

You're not feeling worried because, inside, you have the confidence and knowledge to make a success of the new venture. As to whether your wife is laughing these days, size really isn't everything...adaptability is.

Steerforth - I loved your description of the sozzled but sedate drive home etc. It's hard not to feel nostalgic for a more 'jolly hockey-sticks' kind of time. But of course their were drawback, too...

Have to say my first thought was, 'Ian McCulloch', but I like the Robert Smith and even, Heathcliff, associations too.

You will be great. Enjoy the calm before the busyness.
All the best, Michelle

Why are you wearing *my* clothes?

You must have seemed to them like a breath of fresh air.

My first thought was Heathcliff, But I see the Mike Oldfield resemblance too. Enjoy the relative peace whilst you can!

Mike Oldfield? No, nobody has told me that I look like him, but I have been compared to a range of people, from Trevor Eve to Mr Bean.

(N.B. Mike Oldfield was deeply unfashionable when this photo was taken and I had to hide my LP of Incantations)

I think the look I was going for was that famous painting by Caspar David Friedrich of the man standing on a mountain. I'm glad to see that I wasn't the only person who liked wearing thick, long black coats on sunny days.

One one particularly warm day in Wales, an old lady came up to and said "What are you wearing a coat like that for on day like this? It's bloody ridiculous!"

The island, by the way is Mersea Island.

Once again, thanks for the words of encouragement about Steerforth Books.

Adding to the chorus: why are you wearing *my* clothes?? :P Birds of a (black, slightly delapidated) feather, etc.

My family has similar photographs and stories about my grandparents. They lived in India, and then moved to Rhodesia, which adds a colonial flavour to the tale. I sometimes wish I could have known them then - it sounds like they were a lot of fun. *wist wist*

Enjoy your preparations! Sometimes the anticipation is as much fun as the actual doing part.

What a splendid-sounding family homestead! Did Mrs Steerforth have a grumpy Uncle Quentin who was a scientist who secreted himself in his oak-panelled study all day long perchance, and did she spend her childhood solving smuggling adventures in the secret passages of the house leading down to a hidden cove? I devoured any story involving smugglers and secret passages I must admit and am still trying to find one particular volume I only vaguely remember from childhood, penned by an arch rival of Enid's if I recall.

I think in view of your proven track record succeeding for someone else and your many years of experience at the coal face of the book trade, you deserve to feel quietly confident that all will be well and I wish you every success in finding that perfect Lewes undercliff warehouse!

Love that picture by the way. I am sure Mrs Steerforth's relations were more impressed than you imagine by the fact she chose such a singular and distinctive young man amidst so many drunken yah yahs, and would be proud to be remembered so affectionately by him if they are watching now. What other son-in-law would have thought to pay tribute and keep their memory alive? At the end of the day, there's more to life than money and I am sure you will yet know your share of it and possibly be in position one day to secure the family homestead for future generations to enjoy..? Or as a retirement home for 'Bewildered Booksellers' ;-)

Wonderful sketch of the "Greatest Generation". Booze, the great enabler of WWII. A man who flew bombing missions over Europe once told me that everyone was handed a fifth on their return to base.

Black clothing notwithstanding, you don't look at all like Robert Smith. I was born too early for that look, but "Wanderer above the Sea of Fog" was my wallpaper all through graduate school.

Good to know your wife fell in love with someone real...