"The Past is a Foreign Country"

It's a shame that L. P. Hartley's observation has been so overused that it now feels like a banal cliché, but that's the price to be paid for coming up with a good quote. To add insult to injury, Hartley didn't get a penny for it, whereas Lord Dundas (aka David "I've got my blue jeans on - ooh ooh" Dundas) was paid £10 every time his four-note jingle for the Channel Four ident was played. Life can be very unfair.

Anyway, to get to the point, today's illustrations are a good example of how social mores have changed over the last century.

We begin with a fine example of manliness and patriotism: 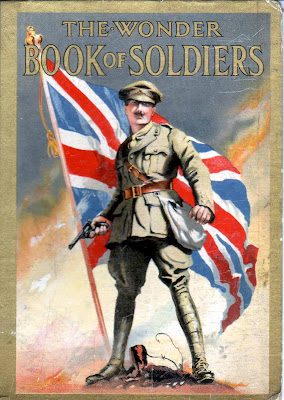 This heroic image is at odds with the indiscriminate, mechanised slaughter of trench warfare and I wonder what ex-servicemen must have felt when they saw images like this.

Next, we move forward a couple of decades to the Battle of Britain, when the RAF were busy teaching Jerry a lesson: 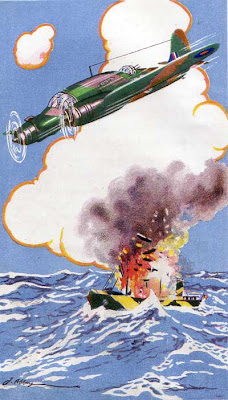 I expect that someone on the boat is saying "Gott in Himmel!" - one of the three stock phrases that war comics seemed to use (the other two being, of course "Achtung Spitfire!" and "Schweinhund!").

Viz comic once did a great satire of a Victor-style cartoon strip, in which a German submarine hits a Spitfire by firing a torpedo into the air, but its plucky RAF pilot dives underwater and machine-guns the submarine. It is patently absurd, but this 1940s book, featuring 'Flak' the dog, isn't that far removed from the Viz parody. 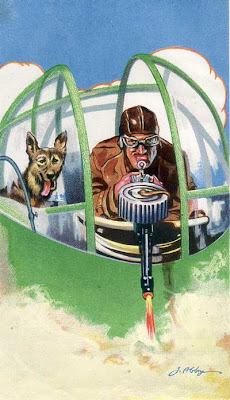 Sadly, Leonard 'Squiffy' Worthington is eventually shot down and he and Flak are sent to Stalag Luft III, but the ingenuity of the German prisoner of war camp isn't enough to stop man and dog from escaping: 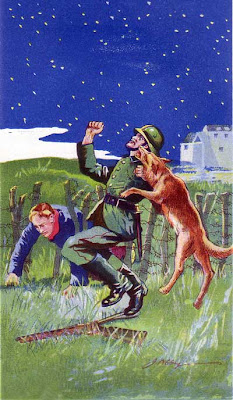 Squiffy and Flak want to get back to England and continue fighting the Hun, so that they can make the world safe for young boys to admire swans: 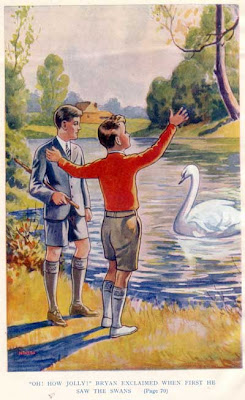 'When first he saw the swan'? I didn't know that they had Google Translate back in the late 1940s.

Moving forward to 1954, here is a photo featuring 'Fabian of Scotland Yard'. Can you guess which person is Fabian? Also, make sure that you read the winning caption underneath: 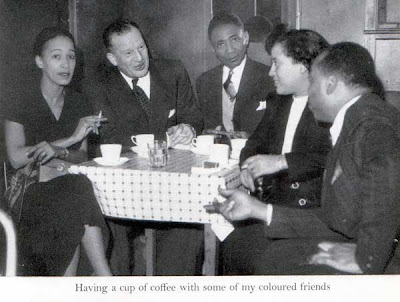 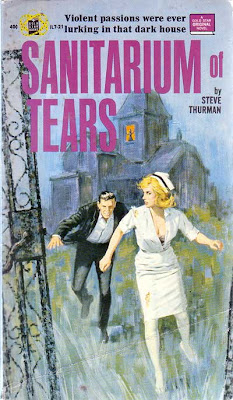 I initialy read the title as 'Sanitorium of Fear' but I think I was drawing from my own experiences. 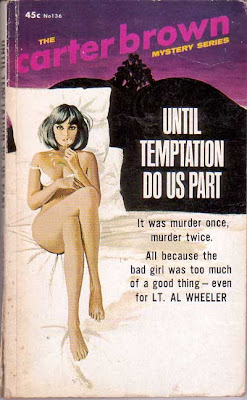 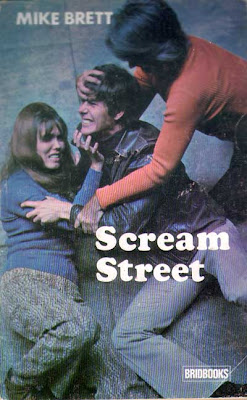 Finally a very odd cover that looks as if two women are assaulting one of the Osmonds (and even worse, one of them might be Marie Osmond).

When I filled my tank up with diesel this morning, I was appalled to see that the total came to £61 and wondered how long I could afford to keep commuting to work. But after seeing today's selection of books, I know that I'd pay a much higher price if I left.
Posted by Steerforth at 4:43 pm

I bet Fabian overused the line "I'm not racist, some of my best friends..."
I feel a caption competition is in order for the ludicrous Scream Street cover. And surely that swan line is a euphemism? Maybe I should stop reading Viz...

I don't know this quote (maybe it's more used in UK) but it couldn't be more true. Also, I will flip the script on it a little and say "Some foreign countries are the past."

Hmm, that is not as catchy, but living in China for the last two years has really made me realize that a lot of what we find "strange" here, we would have also found strange in the "developed" countries 60 to 75 years ago. They are not going to take 60 years to change those things here though. So, visit now if you want to experience them.

When I briefly lived in NZ a decade back I also got the impression that I could experience life a little more like my fathers generation did. I love that because it is probably the closest to time travel I'll ever see.

The Wonder Book of Soldiers - does it have the terrific inside front and back montages? The other Wonder Books have a two page spread of little vignettes (all having something to do with the book's subject) inside the front cover - say, a couple putting up a tent, or looking at the landscape. Then, when you look at the back cover, all the tiny scenes have gone disastrously wrong (the tent collapses, a bull charges from behind). Would be lovely to see the version from this Wonder Book....?

For some reason, when I first read L.P. Hartley in your post it didn't register 'The Go-between' in my brain, but a classic advert about an old man in a bookshop asking for a book called 'Fly Fishing' by J.P Hartley; it must have been the bookshop connection.

I agree with Luce, it's not the swan which got Bryan over-excited. I don't think he is looking at the swan at all; his eyes are focussed on something far loftier and more distant, which made him shout out 'How jolly!' Perhaps it was some boy scouts encamped on the opposite bank - a jolly jamboree. And that would be a euphemism.

All of these are marvellous. I wish those 1960s books were as good as their covers... All the ones I've tried to read have never quite lived up to that fantastic promise.

I've a caption to offer for Scream Street; lady in blue jumper exclaiming: "Brian! You WILL swallow that Rohypnol".