I didn't set out to create a theme to this post, but today's book jackets have conveniently fallen into two distinct categories: Schoolboy Mayhem and Ladies in Africa (and I use the word 'ladies' deliberately).

First, if you thought that the British public school was the epitome of order and self-discipline, think again: 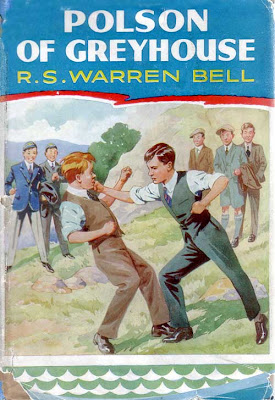 After pausing for a second to straighten his tie, Polson quickly lashes out at the new boy who has committed the double sin of being ginger and failing to leave the bottom button of his waistcoat undone, much to the amusement of a young Kenneth Williams at the far right. It's a jungle out there. 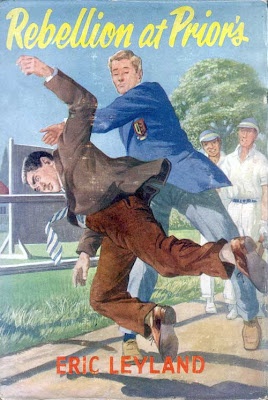 Things go from bad to worse at Prior's, the 14th best public school in Herefordshire. Here you can see the 17th Viscount Melrose administering a sound thrashing to a ghastly scholarship boy who keeps talking about the poetry and the 'brotherhood of man'. 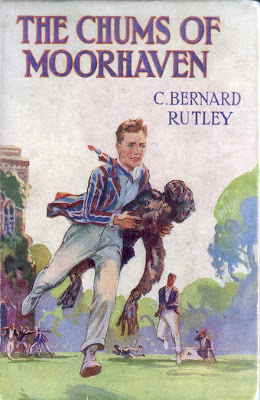 Legend has it that the game of Rugby was born in 1823, when William Webb Ellis "with fine disregard for the game of football" picked up the ball and starting running with it. It was the beginning of a noble tradition.

The boys at Moorhaven School tried a similar thing in 1872, when Aubrey Gosling picked up a dead monkey and ran from the tuck shop to the cricket pavilion in under two minutes. The 'Monkey Run' quickly became a school tradition, but it never caught on. 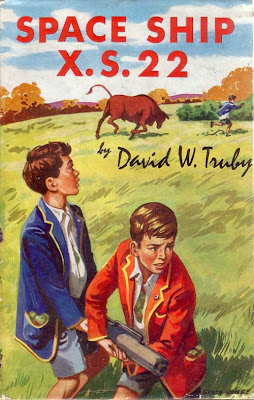 With this book, there seems to be a slight dissonance between the sci-fi title and the image of a schoolboy being chased across a field. I can only presume that the bull isn't under alien control, so what's going on? Is that a deadly alien weapon they're holding? 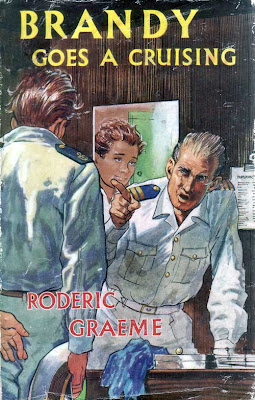 This book isn't nearly as exciting as it sounds.

What interests me is how children's book covers have become far more 'touchy-feely" in recent years, whilst many of the stories have become darker. 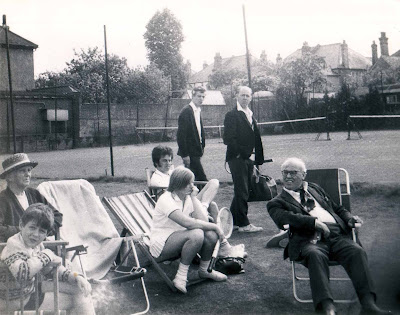 This photograph was found in one of the books. At first it looks quite incongruous, but closer scrutiny reveals how pissed off everyone is.

The final three jackets all fall into the 'Ladies in Africa' category: 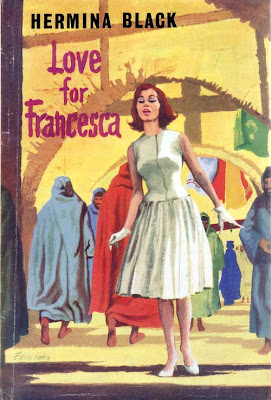 Moving to Africa, this cover seem to suggest dark passions ignited by the lure of the Casbah, although the dustjacket blurb clearly states that she falls in love with a man called Julian. I don't think that's a Moroccan name. 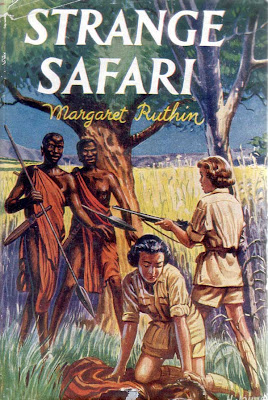 The rather convoluted dustjacket blurb reads:

"When Pudge Barton went on safari in Kenya with her friend Beryl and Beryl's father, Commissioner Newton, with whom she was staying for the summer holidays, she little knew what lay ahead..." 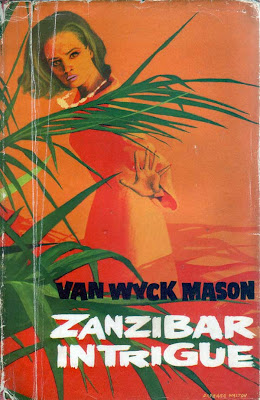 I've no idea what this novel's about, but I'd like to think that it is a sequel to 'Strange Safari':

"Jilted at the altar, when her fiance Rodney runs off with a 14-year-old Masai girl, Beryl Newton flees to Zanzibar, where she amuses herself by holding drinking competitions with foreign journalists. A life of alcoholism and penury beckons, but Beryl's fortunes suddenly change when her long-lost friend Pudge walks into the bar, accompanied by a woman smoking a pipe."

I feel as if I'm trawling through a golden age of book jacket design, between the plain, utilitarian covers from before the First World War, to the knowing, postmodern images of our time.

I can't imagine anyone laughing at the cover of the 'Da Vinci Code' in 50 years time. But all is not lost. We can still content ourselves with the absurd text.
Posted by Steerforth at 4:45 pm

These are just wonderful! And why aren't girls called 'Pudge' any more?

Hopefully in 50 years time people will just be laughing at The Da Vinci Code period. Actually, they already are. Love the ragged primate being carried off the field in the arms of a schoolboy

Another fine array of jackets, with incomparable commentary. Recently, I watched a video clip of James Hunt giving a track marshal a 'right-hander', as pictured on your number one image.

I have a feeling you made up that synopsis...

So glad Francesca was wearing her gloves, but other than that she’s not really rigged our properly for the Casbah is she? Why are all the locals scurrying busily away and giving her a wide berth, when we know the opposite would be true? Where was Julian when she needed him?
That photo of the disgruntled family grup is wonderful; you could write a whole story around it. I wonder what it was that cheesed them off so much. Enjoyed the commentary.

Being 'pissed off' seems to be the general theme. I mean, who wouldn't be annoyed at a ginger boy with an unacceptable waistcoat-button-engagement ratio, the threat of monkey and bull hunting being outlawed, poetry and music talk, watching amateur tennis when you could be at the social club, being overdressed in Africa, being jilted for a child...the list is endless.
Excellent post, highly amusing collection.

I'm sorry I can't think of comments for every post you put up but, for what it's worth, I love your blog. It is v interesting and makes me laugh a lot. Who could ask for more?

"What interests me is how children's book covers have become far more 'touchy-feely" in recent years, whilst many of the stories have become darker."

Love your blog. I just picked up a book recently that you might find interesting. It's German and English translation - with additional happy ending resolutions in the English to save today's children from the original, rather scary stories: Struwwelpeter 2000. Originals are by Hoffman, of course. It was one of the very first children's books.

Thanks for the recommendation Séamus. I've come across old editions of Struwwelpeter at work, but didn't stop to read them, so I shall remedy that next time.

zmck - "Who could ask for more?" Well, I couldn't ask for a nicer comment. When I upload new posts, I'm never sure whether they'll strike a chord with others or fall flat, so it's really gratifying when people take the time to comment.

I think it's a shame that girls aren't called 'Pudge' any more, but I wait in hope for the inevitable revival.

I couldn't find a clip of James Hunt (surely one of the least charismatic sportsmen of all time?) punching anyone, but I'd love to see it.

Re: 'The Da Vinci Code', I must admit I have a grudge against Dan Brown. I bought the book at an airport - I hate flying and wanted something to distract me . I'd been given the impression that Dan Brown's book was the new 'The Secret History', but 30,000 feet up I started reading some nonsense about someone called 'Sir Leah Teabing'.

By the time we landed, I was a broken man.

I thin you've missed a trick here S. 'Poulson at Greyhouse' is quite clearly a very early performance of 'Bend It' by a young Gilbert and George.

Thanks Richard - I think you're probably right. I've added your link to the post as it's too good to miss!

You can see the James Hunt clip HERE

Thanks Martin. I enjoyed that!

Thank you for rescuing treasures and sharing them through your blog. It is fascinating that the style of these covers feels so different to the kinds of things we encounter in bookshops now.

It made me think of 'Bliss' a book of postcards by Martin Parr which I chanced upon in a second hand bookshop in Hay on Wye. Looking at it from here and now, the postcards he chose for the book are all trying very hard to promote a particular vision of domestic bliss. It becomes clear as you flip through the book how much attitudes towards the way we present ourselves/our ideals have changed.