It has been a quiet weekend. On Friday night I reluctantly agreed to go to an 80s disco, which I mistakenly assumed had something to do with the Royal Wedding, but turned out to be a fundraising evening. There wasn't a single person there under 30, apart from a brief moment when two teenagers walked in, took one look and immediately left. I knew how they felt.

It was the quinteseential 80s disco: the music was rubbish, I didn't cop off with anyone and the DJ refused to play The Smiths. I'd forgotten how much I hated evenings like this.

My mother-in-law thinks that the great tragedy of my life was that I was born in the wrong century and that I should have been a country parson in the Victorian age. Sometimes think she's right.

However, I drank a magic potion that enabled me to travel through time (a la 'The Amazing Mr Blunden') to the late 20th century and within an hour I was on the floor dancing (albeit like someone with a slipped disc) to Run DMC, probably cramping Mrs Steerforth's style. Further drinks bought out the inner Travolta and the evening turned out to be almost enjoyable.

Naturally I suffered the next day and rather than go out, decided to spend my time sorting through a new album of Victorian photos that arrived at work last week.

It's a strange album. The photographs have been taken all over the place, including one from Sydney, so it's hard to tell where the family came from. One picture is dated 1881 but I suspect that some may be older, if the fashions are anything to go by. I have included the original captions: 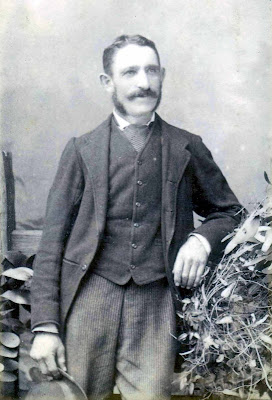 'Great Uncle Brindley, Sydney' - the first Australian studio portrait I've come across. This would have been taken around the same time as Marcus Clarke published 'His Natural Life' - one of the first 'Australian' novels (and a gripping read if you haven't come across it). 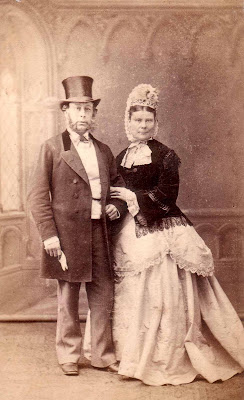 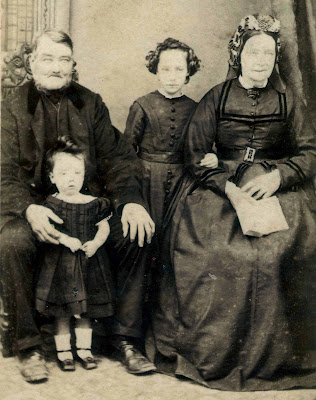 This group of 'striking' looking people are sadly unnamed 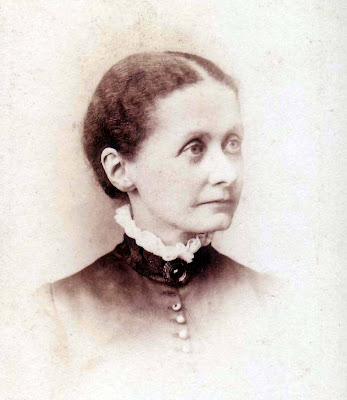 This woman is also unnamed, but she looks uncannily like an ancestor of Cherie Blair 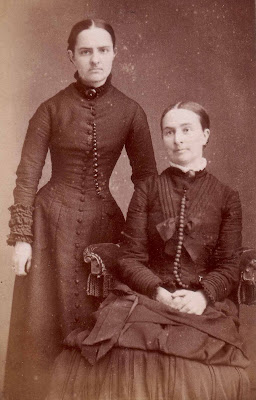 'Aunt Ruth and Aunt Mary' - I don't think that it would be entirely unfair to suggest that Aunt Ruth might have had a few 'issues', if that scowl is anything to go by. 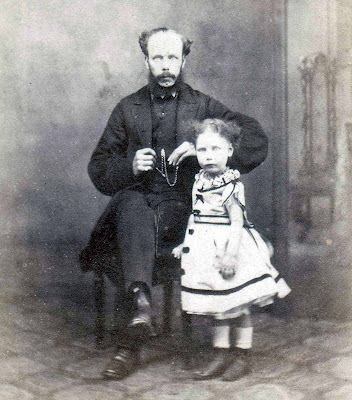 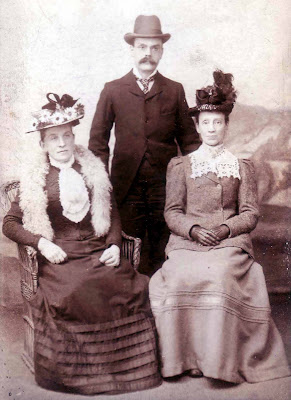 'Cecil, Winnie and Irene' - I wonder when these names will come back into fashion? 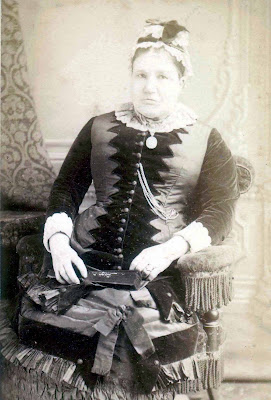 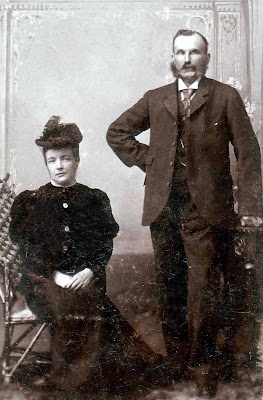 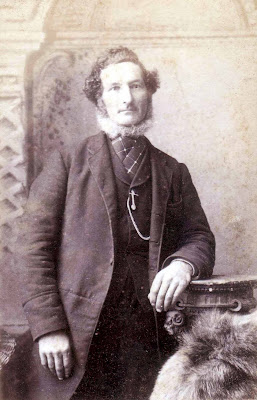 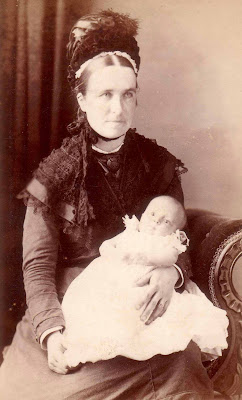 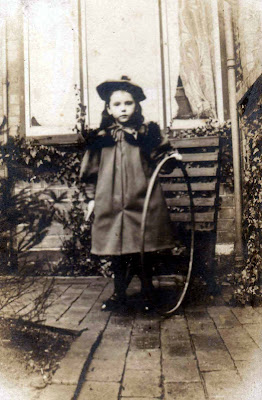 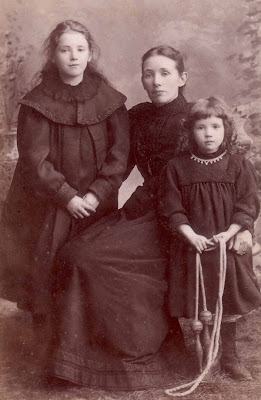 These last two photographs are also unnnamed and undated. Are the mother and daughters in mourning? 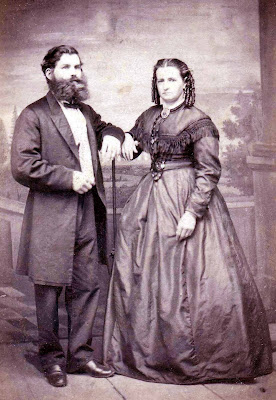 Finally, three plates from a Victorian children's book published in 1881: 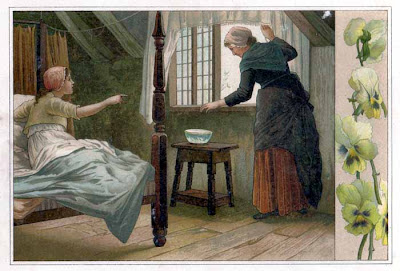 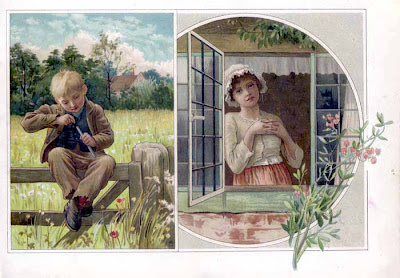 At work, we have a growing archive of colour plates from the ninetenth century, but the novelty value still hasn't worn off and I feel excited whenever I find one.

Maybe I need to go to more discos.
Posted by Steerforth at 9:41 pm

Ah the Victorian disco scene - you definitely missed out there Steerforth! ;- )

I'd certainly go back in time if I could take the internet and a few home comforts with me, such as equal rights for girlies.

Aunt Ruth's head looks way too big for her body and there is something strange about her right arm - which may be why she looks so angry and unhappy.

Console yourself,at least you didn't 'cop off' with a dead ringer for the lady you'd rather not comment on. What do you think the big differences in your lifestyle would be should you be living as your mum in law described?
KFC, 80's disco, 'uncool' comments regarding the future queen-your latest posts suggest an identity crisis!

Well, if I was a country parson, I'd have a nice big rectory with a study. I'm assuming that I wouldn't have to do much work and instead of blogging, I could write sermons and address them to a captive audience!

Obviously there's the small matter of religion, but it's only the Church of England ;)

Actually I'm quite happy living in 2011, but the other night reminded me of how awful discos were if you don't like dancing. I love talking to people and had forgotten how difficult it was to have a meaningful conversation when the music's at a level that rearranges your internal organs. I hated it just as much when I was 20.

Re: copping off - I was a DJ myself for a short time and relished the power I had to help or stop people from 'copping off'. There was one person I really didn't like who was on the verge of getting a slowie with a girl who deserved better, so I put on the theme tune to Joe 90. That was the end of that.

I haven't seen 'The Others' - I shall have to watch it.

Aunt Ruth's head is a little on the large side, but does her arm look strange because the waistline is so high?

Given how tight her dress is, Aunt Ruth is clearly upset that she hasn't been able to draw a proper breath for years.

I never did the disco scene. And if I should ever begin to wonder why, I'll remember the way you described it.

The woman in the 'I shall refrain from passing comment' photograph is just about to leap up and bash the photographer round the ear with her fan - just look; she has a murderous look in her eyes and is poised to spring. Perhaps the photographer had tried to 'cop off' with her? Anna C

The big-eyed woman for some reason reminds me of that nineteenth-century quiet titan, Emily Dickinson.

I enjoy your comments almost as much as the photographs, and I appreciate that you only attach them when you have something to add. That "issues" made me smile.

Oh, what a fantastic find. It does appeal to one's voyeuristic side.

But, you had me at "The dj refused to play The Smiths." That would irk me too.

Very glad to meet you, Steerforth.

My theory is that the child who so strongly resembles its father is actually a boy. Hope so...