If you like your book covers to have a liberal sprinkling of neo-Vorticism, this 1924 German novel is just the ticket: 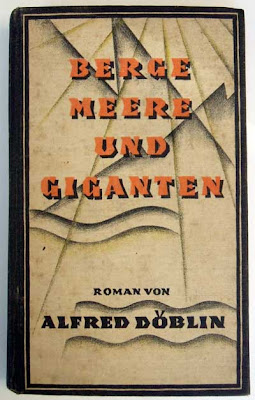 I'd never heard of Alfred Döblin. Apparently he was the author of 'Berlin Alexanderplatz', which some people may remember from the Fassbinder television adaptation.

The second book doesn't have such an attractive cover design: 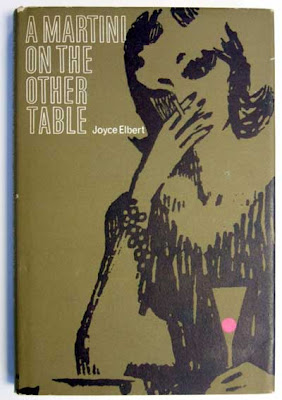 But the author photo on the back of the dustjacket is superb: 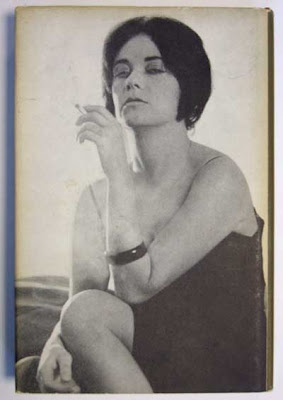 She's no Iris Murdoch, in any sense.

Published in 1963, this novel looks as if it would appeal to anyone who has enjoyed 'Mad Men'.

According to the jacket blurb:

'The author had just turned thirty and divorced her second husband when she wrote this astonishing first novel - a daring story of a single woman's frantic search for love in a loose-living, free-wheeling world.'

It looks quite a lively read. I like the first line:

'After my marriage broke up, I went haywire.' Short and to the point.

Further down the first page, the narrator writes:

'Two things were very appealing to men, I discovered. One was a recently divorced woman and the other was a complete bitch, and to my surprise I woke up one day and realised I was both, so I had no trouble at all.'

Steamy stuff. A lot more exciting than the book I'm dealing with at the moment: 'The World of Nitrogen' by Isaac Asimov.

Full credit to Asimov for spotting that gap in the market - books exclusively about nitrogen - and with cocaine, nitroglycerine and nylon all owing their existence to this element, it's more interesting than you might think.

But only just.
Posted by Steerforth at 12:17 pm

Don't suppose you can supply any more extracts? I very much enjoyed the ones on offer.

So pleased to hear that Asimov was fighting Nitrogen's corner in the meantime. What a man he was. Also one of the best-whiskered SF writers of the last 100 years.

I actually enjoyed 'Mad Men'. It must have been good, because the BBC won't be showing the next series.

Wonder what became of Joyce? I have to google her... so to speak.

I love the word 'frantic' in that blurb.

There's a good website for anyone who wants to know more about Dundy:

Sam - I looked for some further quotable passages, but didn't find any, except for one:

"My mother told me that marriage is a sinkful of dirty dishes and a husband who came too fast."

Martin - Let me know if you find out what's happened to Joyce. She'll a few years older than Joan Collins now, but not many.

Some desultory Googling reveals that Joyce Elbert was in trouble with the US tax authorities in the early 70s, at which point she lived in Spain. She was also the author of a novel about air hostesses called Crazy Ladies ("the first really great dirty book" - Cosmopolitan), which according to a curious and rather specialised site for girdle enthusiasts (http://www.starbacks.ca/~girdlezone/literatu.htm) "traces the affairs of four repulsive women in far more detail than anyone would want to know", and "makes Valley of the Dolls like Pride and Prejudice". For those who are interested, there is a long extract...

I want to read that novel! The photograph is so wonderful!

Mad Men season 4 will be available on Play.com 21st March (we have no telly).

Ah, not being a 'complete bitch.' I knew I was going wrong somewhere when so many of them seem to end up with the best men!

Terminal niceness is a terrible ague.

Then again, it was probably more of a novelty to be a 'complete bitch' in the early 60s when most people still behaved.

What a fast young thing that Joyce Elbert was.

"Today I had another upsetting experience on the Internet. I chanced upon Steerforth's blog, somewhat against my better judgment. I nearly clicked off the page when I realized what I'd done but my love of good books overcame my reservations.

What a mistake! The sight that greeted my eyes was even worse than pornographic film clip I encountered on my last visit. On the pretext of discussing an old novel, Steerforth posted a photograph of an attractive but wanton woman, posed provocatively with her bare (or more likely stockinged) leg drawn up. It was an image that transgressed all bounds of decency. I could scarcely believe my eyes and yet to my eternal shame, I found myself drawn to study that image of fallen womanhood. I fear I will have another lewd dream about electricity substations tonight. What a torment it is to lay beside my innocent Brenda, knowing I will soon delve into realms no godly man should explore.

Steerforth is, I believe, at heart a good man. He is married with children and like me, has taken in a parent. Why would such a man journey into the dark and dissolute side of humanity? Is he so overcome by unclean desires that he cannot help himself? I shall spend much time in prayer regarding his sad straying from the path of clean and wholesome family life. I shall not forget to include his relatives as they must in some way be aware of his terrible proclivities.

To add insult to injury, he also included a photograph of some horrible vortex, the sight of which gave me a headache and caused a slight digestive upset, only aggravated by Nana's nagging at the dinner table.

I so hoped the Internet would be a place in which goodness met goodness and kindliness and warmth toward others would grow and multiply, pleasing our Lord and even preparing us for the higher plane. Instead, it seems to be some ghastly inferno of unclean thoughts and ill will toward one's fellow man. My optimism now seems foolish and even demented.

Who knew that a kindly bookseller could harbor such dark desires?"

Junie - that was a pitch perfect parody of Derek's diaries - one of my favourite comments of all time. Thanks for making me laugh on a dark, dank winter afternoon.

Laura - I agree, although terminal niceness seems to work for Michael Palin.

Matroskin - Is it Season Four already? I still have 872 epidodes of West Wing to watch before I can start thinking about watching anything else!

Mike - thanks for the link; a very saucy book, judging from the extract and pretty badly written. There's even a sequel - Return of the Crazy Ladies, so someone must have liked it.

You can see the cover here:

I'll bet that nice Michael Palin is married to a 'complete bitch' though.

Junie, amazing what you can do with a ouija board, bringing Derek back like that! Thanks. Seriously though, a real gem of a pastiche.

Janie, that is hilarious! Steerforth, thanks for another gem.

Thank you for the photo of Joyce Elbert - The Crazy Ladies remains on my bookshelf.

Joyce Elbert has honed her horny craft over the years preceding Ronald Reagan, culminating in A Very Cagey lady (aka Murder at the AA), which is a decadent who's who of Manhattan alcoholics, one of whom is a killer. A great nod to Agatha Christie! But her most intense and ambitious novel is The Crazy Lovers, about the lifetime of brother-and-sister decadents who never knew they weren't siblings as they reconvene, murder, seduce, and spend lots of other people's money in Paris, Spain, Siwtzerland, and London. Its lead is Alexis and precedes "Dynasty" by a year or two. Tis pity Elbert evaporated. Thank you! Frederic Kahler

I wonder what happened to her - there's no Wikipedia entry, sadly. Is she still alive?