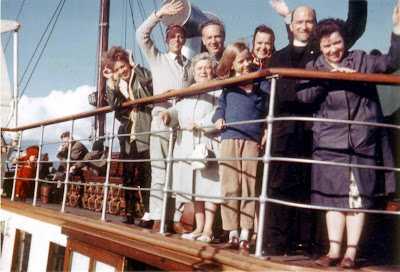 Today's collection of photos come from a huge haul - the largest I've seen - that appeared on my desk late on Friday afternoon. I've barely scratched the surface, but the following images are the ones that made an immediate impression.

It will take time to trawl through the contents. So far, all I know is that the family in these pictures lived in a council house in Manchester. They may also have had an Irish connection, as there are lots of photos of rugged scenery and priests: 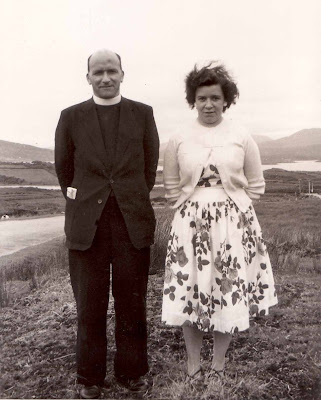 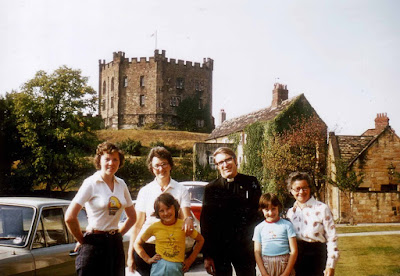 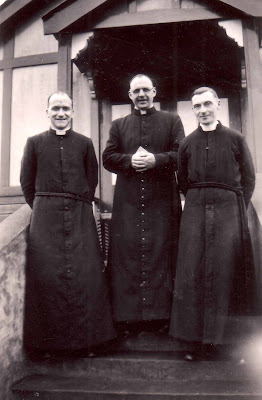 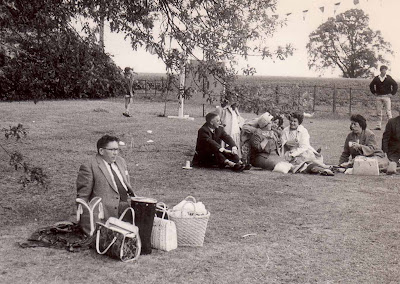 This photo would be entirely unremarkable, if it wasn't for the fact that the man looks as he is emerging from a hole in the ground. 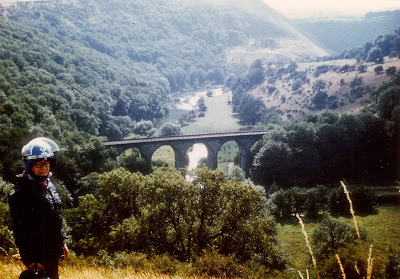 It's a novelty to see anyone on a scooter these days, particularly an older woman. But in my childhood, I remember several local mums and grannies beeping at me as they whizzed past, with several bags of shopping precariously balanced at the back. 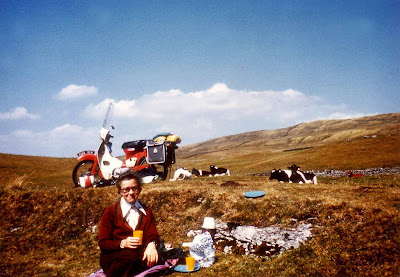 An idyllic scene. Would a scooter holiday be feasible on today's congested roads, with juggernauts and 4x4s rushing past? 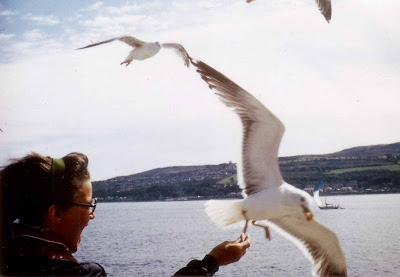 Is she really grabbing the seagull by the foot? 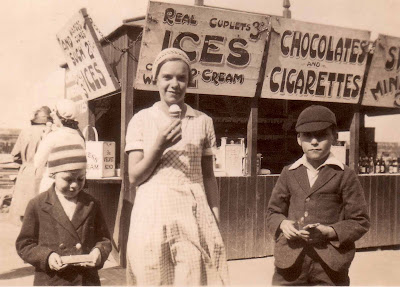 I'm fairly certain that the seagull-assaulting scooterist is an older incarnation of the girl of the middle. 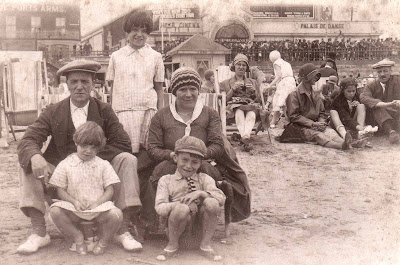 I had no idea that flat caps were so big in the north - literally. In my family photos, even the poorest men usually wore hats, but caps were obviously de rigeur in this part of the world. 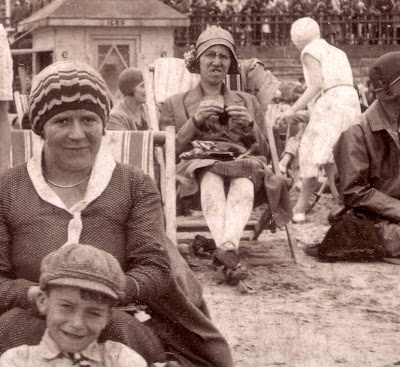 I rather like this woman's tea cosy-style hat (I shall refrain from passing comment about anyone else in the picture). 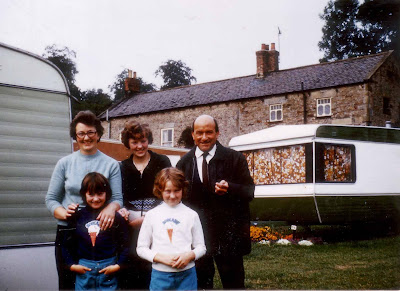 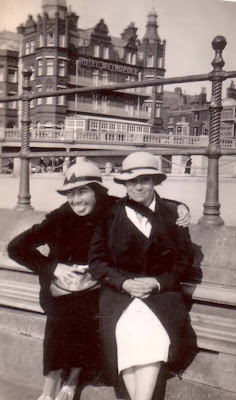 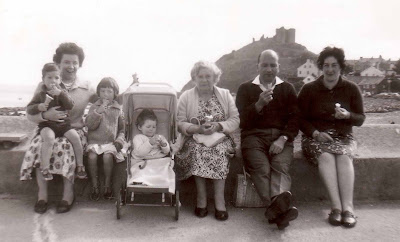 There are many photos of holidays in the British Isles, but also a few from more exotic locations like Gozo: 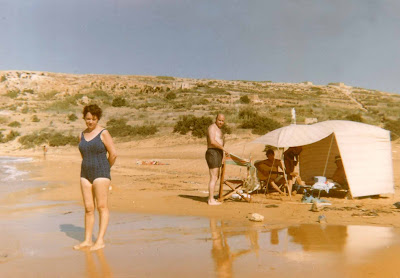 Out of the hundreds of black and white photos in the collection, this one stood out: a lovely portrait, beautifully lit and composed. 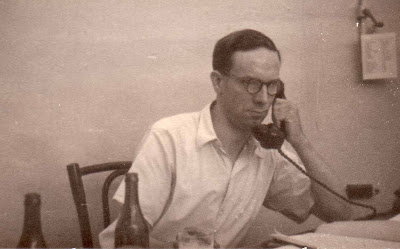 I also like the 'staged' pose in this photo. 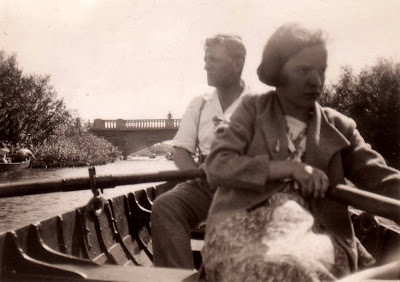 I though that rowing was supposed to be a pleasurable activity, but the grim expressions on these people's faces suggests that they've just had a terrible row (as in rhymes with cow).

These photos could end up being the visual equivalent of Derek's diaries - there are several boxes worth, including a number of letters. As usual, they were almost thrown in the skip. Many of the pictures are quite commonplace, but as I hope this selection has shown, even the most ordinary lives have something remarkable about them.
Posted by Steerforth at 10:39 am

I envy your position. As a shameless people-watcher, having access to such intimate glimpses of life appeals greatly. Every picture certainly tells a story.

Is the priest in the second picture the same person as the man at the caravan? (And if so, why has he lost his clerical collar?)

Because of my writing I love these sepia-toned records of the past, and that one photograph of the young man looking thoughtful is, as you say, beautiful.

Some of these belong in a book.

I can't tell you how much I enjoy your photo finds.
Thanks for taking the time to post them.

Omigosh, the boy on the right in the b&w photo of the children in front of the ice cream stand is wearing a school uniform identical to the one my husband wore as a boy in St. Albans! But then, perhaps every English boy who went to school in the 1950's had a similar kit. But seeing your post made me smile all the same.
Canadian Chickadee

These are beautiful. Thanks so much for all the work involved in bringing them to us. I think that the ice-cream eater who later became the scooterist is also the woman on the right in front of the Hotel Metropole.

I'm fairly sure the people with the flat caps are in Margate, with the pub being the Cinque Port Arms and Dreamland as it was before the current Moderne version was built.

Oh boy! These are great. I'm really looking forward to getting to know these people.

Flat caps were definitely big. I still used to see quite a few old men with them when I was young. I quite like them, in fact.

The octagonal castle keep is Durham. They are standing on Palace Green.
http://www.geograph.org.uk/photo/69896

Forgive the brief reply to these comments (which I'm very grateful for), but I'm about to go out for the day.

It does look as if the priest is in civvies in the caravan photo, unless it's a brother. I'll search for more evidence.

Margate is an interesting suggestion. I'd assumed that it was Blackpool. I'm planning a trip to the Margate and the Thanet coast in a few weeks, so I'll be able to investigate further.

Thanks for the link to the Durham photo - I didn't know where it was.

When I get back to work, I shall start ploughing my way through the boxes and see how much information the letters contain.

I never get tired of looking at your rescued photographs. As ever, I'm wondering what happened in the minutes preceding, and following, the click of the shutter. Great stuff.

I suspect that the ice-cream eating, scooter-riding seagull-snaffler might just have had the tip of her finger nipped off by the seagull, hence the look on her face!

Those sort of scooters are very common here (the Netherlands, but are most often ridden by young people. People of the older generations are more likely to be seen on bikes.

I adore old holiday pictures! Cameras, film and having pictures made was more expensive, and a lot of the photos have a rather solemn atmosphere. I remember once sitting on the city walls in Berrick when a family came, stopped, and after 30 seconds the wife said to the husband: "Come on, take the picture so we can go!" These photographs are really lovely. I like the man coming out of the earth: apparently he was told to keep an eye on the bags and totes of several ladies.

What fascinating photos. Love the caravan holiday and the seagull catching ones in particular.

'Scooterist' sounds so Derek it makes me smile, but there really is a magazine by this name - I saw it in WH Smith's the other day. That lady scooterist would have doubtless been regarded as quite the intrepid one in her day, marveled at for her independence by more timid female friends. Though presumably she had a gentleman (or lady) friend who took the photographs.

I love these but can't help feeling sad some family member didn't feel they were worth keeping. They are beautiful.

Tintin - I find it hard to understand how anyone can reject a collection of photos like this. On a few occasions, someone appears to be the last of their line, but most of these albums look as if they've been binned by children and grandchildren. It's terrible!

Camilla, I can understand why so many people cycle in Holland - it's flat and cyclists are treated with respect. I stayed with some friends in Rotterdam and had a wonderful time cycling around the city (once I'd got over the shock of the back-pedal braking). I don't remember seeing many scooters.

Gabriela - You raised an important point about the expense of photos. People thought more carefully about the images they took, because they were limited to 24 or 36 shots per roll of film. Too many of today's pictures are mobile phone snapshots. However, I wouldn't swap digital for film.

Laura - you're right. I think I first came across the word 'scooterist' when I was editing Derek's diaries.

some amazing pictures! Thanks for sharing!

illustration of pictures in this article absolutely perfect.