The Wind of Change

I've no idea why, but during the last couple of weeks I've been inundated with photographs. The Victorian albums can be sold, but the rest usually end up in the bin, so I like having the opportunity to give some of these images a new life on the internet.

The following photos all come from an album that begins in 1940 and covers a period of roughly 20 years. As you will see, it is possible to construct some sort of loose narrative from the images: 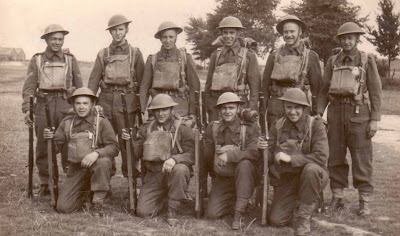 1940. Judging by the trees in the background, this picture was taken either around the time or after the "miracle" of Dunkirk. As you can see, the British Army has been reduced to a ramshackle unit of ten soldiers, using equipment from World War One. In spite of this, the morale appears to have been high. 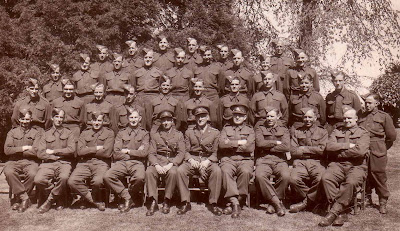 1942 and the Army is in a much stronger position, with smart new uniforms and modern weapons. It is time for the Empire to strike back: 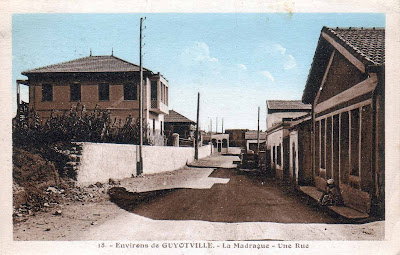 This is the French Algerian entry for the 'Boring Postcards' competition. By now, Allied troops have driven the Germans out of North Africa and are preparing to launch the first invasion of mainland Europe. 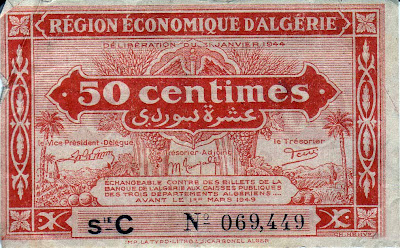 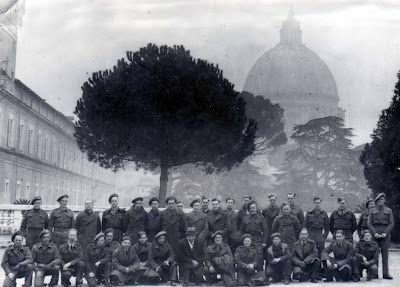 A group shot taken in Rome, with St Peter's looming in the background. I'm not sure who the dodgy-looking civilian in the centre of the front row is, but perhaps he had 'local connections'. 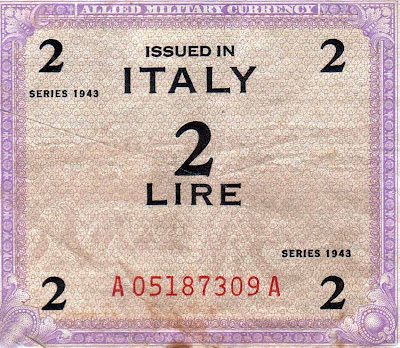 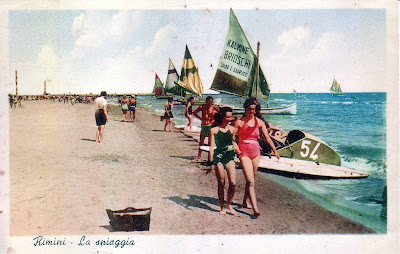 A postcard from Fascist Italy. There are quite a few cards in the album and I like the idea that in the midst of this great chaos and upheaval, soldiers could still pop into a giornalaio and buy a few scenic views to send to the folks back home. 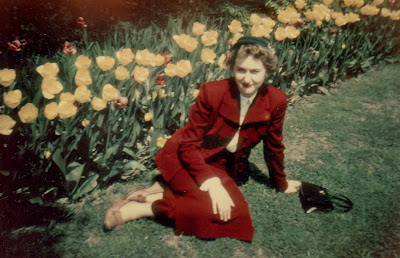 Peacetime. This is the earliest colour image I've come across and it resisted all of my attempts in Photoshop to achieve a more natural hue. 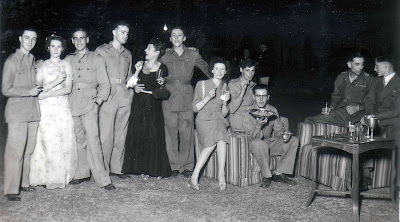 1946 and we are now in India, during the final days of the Raj. It looks like a good life, for some at least: 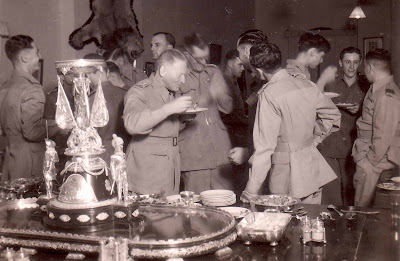 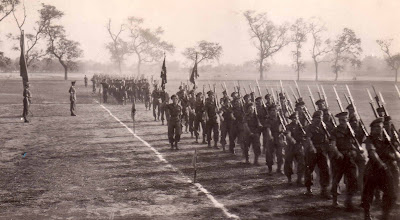 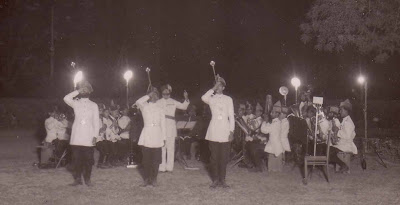 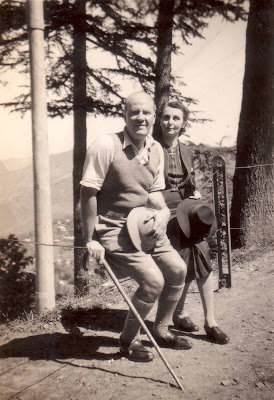 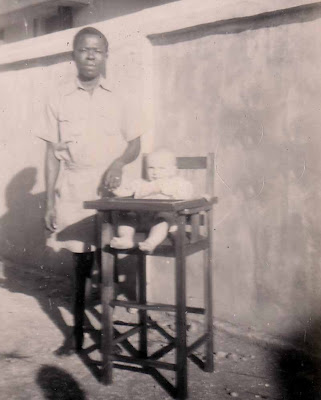 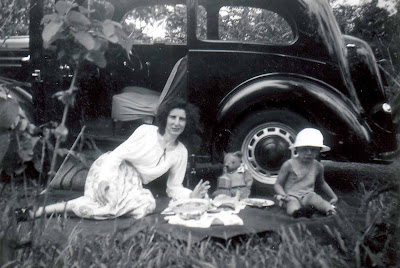 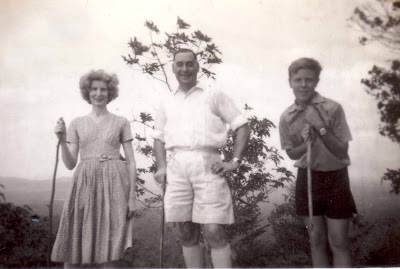 "On Bukit Lambak near Kluanc 800 feet up near microwave station"

Looking at the evidence - postcards, letters and photographs of their homes in Britain - these people didn't come from a moneyed, well-educated background, but enjoyed a remarkable standard of living. During their days in Nigeria, Ghana and Malaysia, they enjoyed huge houses with servants, fine weather and exotic locations. In Britain, the best they could hope for was a cramped suburban semi.

When the "Wind of Change" bought a swift end to the British Empire, these people must have returned home with heavy hearts.
Posted by Steerforth at 10:52 am

By 1942 the height requirements for the British Army had been seriously relaxed, if the chap on the far right of photo 2 is anything to go by...

I wish I could have a flip through the rest of the album-- I love albums like this. It was having the chance to fund such which made my job in the charity shop I used to work in bearable. Thank you yet again for posting such!

In picture two there is some sort of unofficial (or maybe official) competition to see who can wear their hats at the most precarious angle.
My money is on back row far right as he appears bald and therefore is unaided by any sort of friction. Although it may be worth a side bet on second row third left who seems to be wearing a good helping of brilliantine which must make the surface very slippery.
Second row fourth from left is just being silly.

I'm curious why you say: "they enjoyed huge houses with servants, fine weather and exotic locations. In Britain, the best they could hope for was a cramped suburban semi."

Why is a huge home better than a smaller one, living in a foreign country better than living in the one the were born in, keeping servants better than doing one's own housework?

That's an interesting question. I suppose I was guilty of allowing personal experience to colour my judgement.

My aunt lived that sort of life in Morocco, where she worked as a missionary society-sponsored midwife in a small, remote town, at the foot of the Atlas mountains.

When I was 16 I went to stay with her for a few weeks and was struck by the contrast between her life in Britain, where she struggled to afford the basic necessities, and her life in Morocco, where she was like the lady of the manor.

In Morocco this woman, who had grown up poverty, enjoyed a status and respect that she didn't have in Britain. She loved it.

I don't think that sort of life is necessarily better - I'm perfectly happy in my servant-free, terraced house in rainy Lewes - but I can see how exciting and seductive that sort of life must have been for many people, who unquestioningly accepted the colonial system.

I can't make my mind up whether E is being disingenuous or not...but into the equation on the minus side might perhaps be added years of shortages and rationing. While not endorsing the colonial mindset, I don't find it the least surprising!

I am honestly asking, not being disingenuous.
Our unquestioning acceptance, approval and applause of bigger, "better" lives often at the expense of "others" is well worth thinking about.

I really don't think there is an "unquestioning acceptance, approval and applause" of exploitation these days. The desire for "bigger, better lives" is still a powerful draw for some, but with global warming and the demise of the consumer society, I think an increasing number of people are becoming interested in sustainability.

As far as the past goes, people were indoctrinated into thinking that the British Empire was good thing for everybody and that the natives were incapable of governing themselves. I can understand this mindset without having to agree with it in any way.

I enjoyed James's observations about the hat competition - I think he's right, especially if you look at the expressions on their faces!

This was a very interesting set of photographs, mirroring aspects of my grandparents' lives. Grandpa went to India where he met Granny & they married, and my Mum and Uncle were born there. After that they moved to Rhodesia, where my aunt was born, and where my Mum and Dad met and had us four kids. We later moved to Australia after Rhodesia became Zimbabwe and the government changed.

It seems to have been a path followed by many of those generations.

Thanks for this blog, I love coming here to find something new and interesting posted. :)

Yes, I liked James's comment too - I've always thought that those hats were absurd. I tried my dad's RAF hat on recently and it wouldn't fit a five-year-old.

As for the hats, I think a very strong gust of wind came from the right moments before the photo was snapped. Those who had their hats on firmly above the brow were quite unaffected.

Lovely blog in general and this is a great post. As someone whose grandfather was a part of colonial administration between the wars (even if he was not British himself), I find many resonances in this piece.